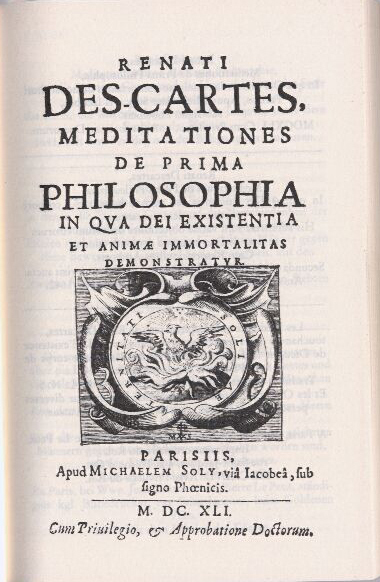 Rene Descartes - in a strong sense - attempted to erase the external world (as well as all which had come from it) from his mind as he carried out his Cogito.

Shouldn't that “reduction” have included the very language he used during his famous meditations?

Of course Descartes did reject all the explicitly philosophical parts of his language. Though he didn’t reject those parts of the language which weren't deemed to be obviously philosophical or contentious.

Thus Descartes might have rejected this statement (even if only to accept it later):

“The world as a whole has a purpose.”

For example, what did Descartes mean by the word “I”? What did he mean by “think”? Could he have justified and explained the use of the word “therefore”? What does “am” mean? And what about the Cogito inference itself?

Of course after the Cogito Descartes could have easily explained and justified his use of the words in that statement.

For example, Possible Descartes might have said the following:

The I is the essence of the mind. The part of the mind that remains throughout its many changes.

I use the word “therefore” between a statement and another statement that's entailed or implied by it.

These are explanations of Possible Descartes' use of concepts and words. Thus perhaps he should have started his meditations with claims of a different type altogether.

For example, meditations on the nature of the mind, thought, the self, or even existence itself. Then Possible Descartes might have offered the following as an alternative Cogito:

Thoughts are processes which occur in my mind.

That's very simple; if not very helpful. However, unlike the other Cartesian examples, this is a statement of what is the case, not a description of the concepts and words one uses to make Cogito-like statements. It can be seen as foundational (or even axiomatic) because surely we can't think or philosophise at all without knowing what thoughts are. (In fact we can.) The Cogito is a thought and an inference. Therefore it can be said to depend on prior knowledge of what thoughts are. There would be no Cogito without thought. Therefore thought itself is more foundational than the Cogito inference; which is a token of the type THOUGHT.

Thoughts are processes which occur in my mind.

From this, Possible Descartes might have wanted to derive numerous other statements which were somehow entailed or implied by it.

In this statement too there are concepts and words which haven't been explained or possibly even understood. That is, what does Possible Descartes mean by “mind”? What is a “process”? Are processes in the mind the same as physical processes external to the mind? And so on.

Not only are there presupposed concepts in this statement: we also need to think in terms of how each concept is intimately connected to other concepts.

If concepts aren't atomic; then perhaps they depend on other concepts for part of their content. Thus even if the concepts SUBSTANCE, Descartes' own THINKING THING, and THINGS WHICH FOLLOW ONE ANOTHER aren’t in the statement itself, the concepts THOUGHT, PROCESS and MIND (which are in the statement) rely and depend upon the existence of other concepts and our knowledge and acceptance of of them. As Jacques Derrida said (in an extreme holistic manner):

And it is here that we enter the territory of the "late Wittgenstein".