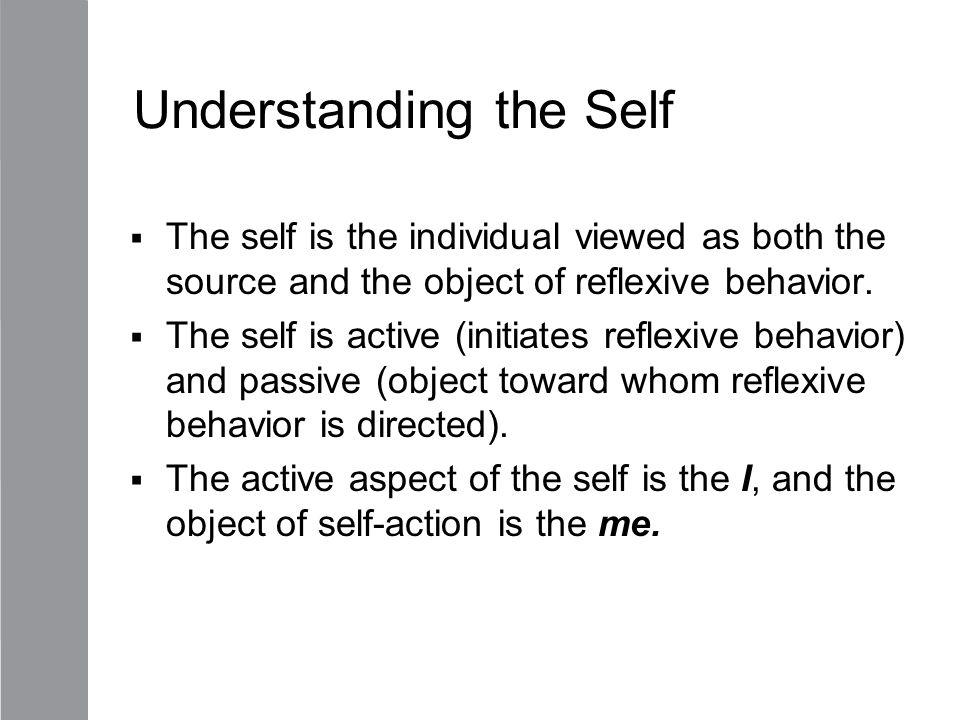 The notion of reflexivity (i.e., to self-referentiality) or, the more closely related notion, self-reflexivity.


The self-identity reflexive relation or property, for example, is sometimes called a “strongly reflexive” relation. A “weakly reflective” relation is, on the other hand, sometimes stated as “everything has it to itself that has it to anything”.


We can have beliefs about our beliefs, thoughts about our thoughts, and so on.


There is an example of self-reflexivity which is more closely related to examples of self-referentiality.


Once example is what takes place when the self/person analyses the (same) self/person. That is, when the subject and object of self-analysis can be said to be one and the same thing – i.e., the self that analyses is the (same) self that is analysed. Thus, in the light of what we've said about self-referential statements, we can now ask:


Can the self/person both have thoughts (about himself) and also be the object/subject of these thoughts?


To give a taster of self-reflexivity or possible self-referentiality, here are a few points that put obstacles in the way of such states.


How can a human subject take himself to be the subject of study; as Descartes famously claimed he did when sitting next to his fire?


Perhaps we can never actually get to the essence (or totality or complete truth) of ourselves because it's precisely the same self that's trying to get to the essence, etc. of itself. It is, therefore, attempting to be both subject and object. (In a Cartesian manner, if we can’t discover our own “true essence of mind”, how can we even begin to discover the true nature of external reality?) According to many philosophers, it's a Cartesian myth that we can objectively “perceive” our own minds or states of consciousness. It's not a fact, then, that the mind (or the items within it) are “transparent” to the self-analysing mind itself. Perhaps we can never get to every item or working within our own minds. Perhaps we can't, specifically, recognise that it has been “conditioned” to, say, believe certain things or see particular things in certain ways. To put it bluntly, if it's the self that is analysing the (same) self (or the self that's analysing itself), then the “unseen” conditionings, workings, non-transparent items, etc., of the self (as object) would also be the conditionings, workings, non-transparent items, etc. of the self that's doing the (self) analysis. It could therefore only be a self which is split into two (quite literally) which could be both subject and object at one and the same time. Though then we can simply say that after such a split we will no longer be talking about two selves, encamped within the same mind-brain: not one self that's split in two. And if that were the case, then there would be no authentic self-reflexivity and certainly no self-referentiality.
Posted by Paul Austin Murphy at 05:51