The following piece is essentially about the anti-realist's problems with mathematical Platonism; as well as about how - and if - intuitionist mathematics ties in with anti-realism.

The focus will be on Michael Dummett's specific take on intuitionism; as well as his position on mathematical realism (i.e. Platonism). Understandably, at least within this limited context, the relation between truth and proof will also be discussed.

Dummett on the Platonic Realm

“'What makes a mathematical statement true, when it is true?'”

The anti-realist, along with many other philosophers of mathematics and mathematicians, will now ask:

How do we gain access to this mathematical reality?

How do we determine that we've accessed mathematical reality and how would we know that our mathematical statements match up with that reality?

Having said all that, and in the hope of capturing the Platonist position, I find it hard to know what all that means. That is, it's hard to understand or accept this Platonist separation of truth (or mathematical results) from decision-procedures and proofs. The intuitionist, of course, believes that there are no truths without decision-procedures (or “constructions”) and proofs because they quite literally bring about the truths and even numbers themselves. Mathematical truths wouldn't exist without them. (Despite that, one may also have problems with the Platonist construal of a mathematical reality which aren't particularly anti-realist or intuitionist is nature: e.g., what about our causal links to the platonic realm?)

What about other anti-realist problems with Platonism (i.e., realism)?

It can be said that a verifiable statement is also decidable statement. Thus it may/will be the case that unobservable (in principle) and observable states will be, respectively, unverifiable and verifiable. Does this apply to mathematics? Platonist mathematicians and philosophers say that mathematics doesn't concern the observable. We can, of course, observe mathematical equations on paper or on the blackboard. We can even introspect certain mathematical symbols. Despite these qualifications, in the Platonist view we're actually observing the symbolic representations of numbers and mathematics generally – not a number or mathematics itself. (In addition, a Platonist will happily accept – and even emphasise – the fact that mathematics and numbers can be applied to the world or used as the basis of structural descriptions of the world.)

Dummett on Truth and Proof

Michael Dummett goes into the technicalities of anti-realist truth without actually mentioning mathematics. In other words, what he says is the case about all/most domains of truth.

In terms of the lack of proof of a statement (although proofs aren't really applicable to verifiable non-mathematical statements), Dummett says that

“we cannot assert, in advance of a proof or disproof of a statement, or an effective method of finding one, that it is either true or false”.  [1982] 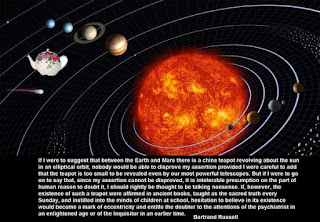 Having said all that, I see very little point in saying that a mathematical statement is determinedly true or false regardless of decision-procedures and their resultant proofs. What does this claim amount to? Where does it get us? It's effectively equivalent to Bertrand Russell's teapot flying around somewhere in a distant galaxy. Yes, there could be such a thing. However, we can never establish that there is such a thing. Therefore what, exactly, is the point of saying that “there's a flying teapot somewhere in a distant galaxy”?

Dummett (in his own way) puts the gist of the last paragraph in more circumspect and, indeed, Dummettian prose. On the proof-independent mathematical statement, Dummett says that

Yes, what's the point of “suppos[ing] a true statement as yet unproved”? As it is, however, there are indeed unprovable truths in mathematics. Dummett himself puts that in this way:

“A Platonist will admit that, for a given statement, there may be neither a proof nor a disproof of it to be found.” [1982]

Despite that, what Dummett has just said is most certainly applicable to non-mathematical statements; whether about distant galaxies, the past, other minds and other problematic areas. This is even more the case when it comes to statements about the exact number of people in a given aeroplane at a given time; or, more mundanely, about whether or not Jesus H. Corbett is dead at time t.

Nonetheless, the realist would ask about the situation in which there is no proof of a mathematical statement or equation. He would follow that by saying that such a statement would still be determinately true regardless of whether or not it had been proved. (This is/was the case with Goldbach's Conjecture and Fermat's Theorem. The latter was proved by Andrew Wiles.)

Objectivity in mathematics isn't a question of objects. Instead, objectivity can be said to be about the objectivity of the procedures and proofs which lead to truth. On the other hand, if this were a question of truth-conditions, then it may have been the case that objects do enter the equation. As it is, according to the intuitionist, this isn't the case for mathematics.

In terms of an intuitionist/anti-realist position on free creations. There must still be decision-procedures which can come up with definite results even if numbers are “constructed”. The toy dog just mentioned was indeed constructed. Still, we have various ways of deciding its nature. That is, like the constructed number or equation, we have ways of determining the nature of the toy dog. The realist, on the other hand, would say that any truths about the toy dog would hold even though no one could ever gain access to it (say, after the creator died, etc.).

Brouwer/Heyting on Maths as a Human Activity

L.E.J. Brouwer, according to Dirk van Dalen and Mark van Atten [2007, 513], thought of mathematics as an “activity rather than a theory” . In that simple sense, truth-conditions or a Platonic reality don't give maths a realist foundation. More importantly, perhaps, “[m]athematical truth doesn't consist in correspondence to an independent reality”. In a certain sense, this means that such a construal of mathematics is beyond the anti-realism/realism debate in that verification or observation isn't even possible in principle.

a construction (or decision-procedure) = (a) truth

It may seem odd that the intuitionists' rebellion against “mystical Platonism” should rely, instead, on the happenings which go on in the privacy of a mathematician's head. At least that's how Dummett saw it. Dummett's position is, of course, Wittgensteinian [Dummett, 1978, 215-247]. Yet, in a sense, that's exactly what intuitionists or mathematicians do. That is, even if we supply a retrospective externalist (or “broad content”) account of the meaning/s, etc. of those mental constructions, and also argue that they have externalist/broad features (even during the private acts of mental construction), at the initial stage this mathematical mental activity is still individualistic (or private). The functions, numbers and symbols are of course public or communal. Nonetheless, the mental/cognitive acts of construction are, in an obvious sense, private. So it remains the case that, on the one hand, mental objects and actions aren't really private in that their meanings, senses, extensions or whatever are externally determined. Nonetheless, it's still the case that the mental constructions of numbers or mathematical statements are private. And surely no intuitionist would have denied any of that. (Perhaps we can say said that Dummett was trying too hard to be a Wittgensteinian.)

It is still the case that private mental constructions can't be the subject of a decision-procedure by other mathematicians (even if the mathematical symbols, functions, etc. are bone fide externalist items). This of course ceases to be the case once the mathematical statements are written down or notated in some other way.

Posted by Paul Austin Murphy at 04:37