(A) The sentence A is not true (Part One) 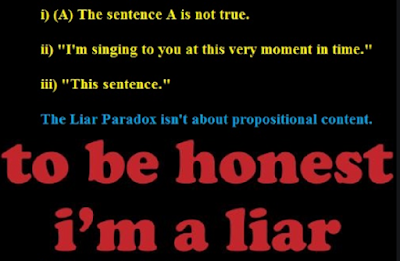 The following is a well-known paradoxical statement:

Isn't it the case that statement A has no semantic content? Is it not a real statement (or proposition) at all? Nonetheless, since many logicians and philosophers don't take this view, let's take it as they take it – as being a genuine, if paradoxical, statement.

We have the sentence “(A) The sentence A is not true” which includes the symbol A. A stands for the sentence it is in and the words which surround it. That means that a symbol within a sentence refers to the sentence which it is in. Now is that acceptable or even meaningful?

Now what, precisely, is true? Sentence A is true, apparently. What does sentence A say? It says that it is “not true” – and that's it. It doesn't say its subject-term of phrase is true: it says that the whole sentence is true.

If we take out the A from the statement, then what do we have left? This:

The sentence... is not true.

What Logicians Think About A

Apparently, when we see

What about a sentence which is both self-referential and which has content? Such as:

(S) The sentence “Snow is white” is not true.

Despite all that, logicians defend the “The sentence A is not true” paradox for two main reasons:

i) The phrase “is true” is an acceptable English predicate.
ii) The whole sentence is grammatically “unassailable”.

But is it grammatically unassailable? I don't think it's either logically or philosophically acceptable. And now I'll reject its grammar too.

Logicians can treat statements such as “Bricks have a sense of humour” or “The number 2 is blue” logically. That is, they can assign a truth-value to such statements and then treat them as syntactic strings from which they can derive further statements and conclusions. Similarly, we can programme the words “The number 2 is blue” into a computer and then that computer can grind out further propositions (or premises) and indeed a conclusion.

So we have a statement (“[A] The sentence A is not true”) which is perfectly grammatical and logical; but which, at the same time, has no semantic content. However, and to plow over old ground, it can also be said that we can't really call it a statement at all. Isn't it simply an arbitrary string of words which obey a logical or grammatical form and which then has had a truth-value assigned to it? (Actually, unlike “The number 2 is blue”, A has contradictory truth-values assigned to it!) At most, then, A is a logical string.

We can conclude, then, that this is why we have the philosophy of logic; which is over and above pure (or formal) logic.