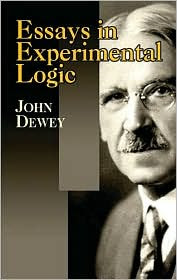 John Dewey clearly has a very particular position on logic. Logic, in his eyes, is derived from the methods and practices used in science. And because science is always on the move (as it were), then we shouldn't see logical principles as


“eternal truths which have been laid down once and for all as supplying a pattern of reasoning to which all inquiry must conform”.


Just as science doesn't offer us eternal truths, neither should logic. Indeed if logic bases its principles on the methods and reasonings found in science, then this attitude to truth will evidently be the case.


All this means that it would simply be unwise to accept any logical principle or truth as having some kind of eternal status. Such things may well exist; though we may not have access to them in their fullness. Having an absolutist position on logical truths and principles may prove to be highly negative in its various implications for logic itself and for all those disciplines that use logical truths and principles.


Perhaps it was Dewey’s scepticism about eternal truths and principles that made him decide that logicians should base their principles, truths and methods, inferential patterns, etc. on what actually happens in science. That way we wouldn't stick rigidly to certain logical truths or principles. Like science, logic should be fallibilist. And indeed philosophers like Quine in the 20th century were indeed fallibilists when it came to both mathematics and logic. After all, Quine even become sceptical about the truth of the law of excluded middle (or at least of its applicability) because of the finding in physics regarding quantum phenomena. And many philosophers believe that statements about the future can be neither true nor false; and that truth-values must include a third value – indeterminate. Such philosophers, therefore, rejected the Principle of Bivalence.


We could say that certain scientists had rejected the law of excluded middle and the Principle of Bivalence long before any philosopher rejected them. These are classic examples of empirical reality having a strong effect on the sacred principles and truths of logic.


Unlike Wittgenstein's Tractatus view of logic, the ultimate relation goes from the world to logic, not from logic to the world. Indeed if logic has no necessary relation to the world, then we may in practice stick with certain principles and truths for all time. There may never be any reason to reject these inalienable logical principles and truths. Only the world can (as it were) challenge them. And the world has repeatedly challenged the assumptions and presuppositions of logic throughout logic’s history.


Dewey brings in a typically pragmatist angle to his critique of traditional views of logic. He takes note of the successes of science. That is, whichever logical rules or principles science used when it scored particular successes are the logical rules and principles that logicians should adopt. And, again, science has always adopted new logical methods in their pursuits. Logic should too. So not only in the relation definitely from the world to logic: the other relation should be from science to logic as well. In that case, logic in a sense seems to take a back seat when it comes to science. Though this isn’t so strange if one considers Quine’s position on epistemology, ontology and all the other branches of philosophy. These too, according to Quine, should take a back seat to science. There is no a priori philosophy, according to Quine; therefore there should be no fully a priori logic either. Logic is effectively no different to philosophy in these respects. Because science’s relation to the world is both more direct and more systematic, then of course logic and philosophy should “defer” (as Quine put it) to science. Or, to use a term used mainly in the 20th century, logic and philosophy should be naturalised so that they don't systematically conflict with science and the findings of science. And just as single statements, terms, judgements, concepts, etc. aren't self-sufficient, neither are the whole disciplines of philosophy and logic. Just as statements can't truly be atomic, so too philosophy and logic as wholes can't be atomic. Holism, of some description, goes all the way down the line. There are no exceptions or escapes.

Posted by Paul Austin Murphy at 07:25