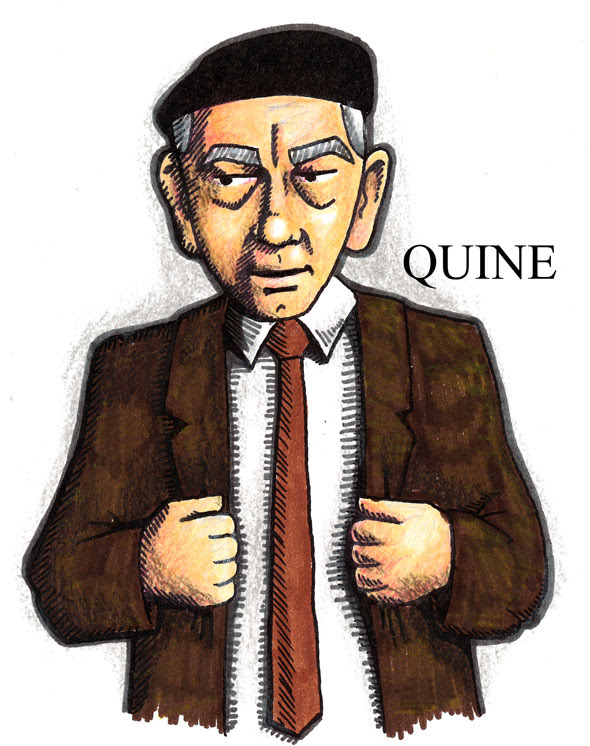 
Of course it depends here on what is meant by the word 'exist'. Traditionally there have been different kinds or grades of existence, so the problem is more difficult than it initially looks. But even if we accept wholly mental existence, or non-spatiotemporal existence, what kind of existence would the round square have? Even that thing, according to Meinong, has some kind of existence or being. But Quine does not tackle the issue of modes of existence, but that of meaning and reference.


Quine tackles the case of Pegasus.


McX (Quine’s fictional adversary) says that if “Pegasus were not…we should not be talking about anything when we use the word”. Indeed it would even be “nonsense to say that Pegasus is not”. This is why some semanticists think that the locution “God does not exist” is as meaningless as “God exists”. McX would argue: Who is this ‘God’ who does not exist? This was the problem Russell attempted to solve in his ‘Existence and Description’. The problem can be called the Problem of Empty Reference.


Quine himself refers to Bertrand Russell’s famous take on the problem; and he largely endorses it. Russell himself attempted to solve this problem by getting rid of proper names. Thus


“The author of Waverley was a poet.”


For example, the idea of “nothing else wrote Waverley” would be farther from the mind of the utterer of the first example as anything could be. The second example is more of an imposition than a version or translation.


How did this help Russell and Quine?


The problem is more pronounced when someone makes an utterance about someone’s or something’s non-existence. Again, to what or whom is he referring if that person or thing doesn’t exist? So we have two examples of a locution again:


“The author of Waverley is not.”


“Either each thing failed to write or two or more things wrote Waverley.”


Later in the paper Quine recapitulates on these issues. Again he stresses the need to erase names. So what do we use to refer to entities? We use variables. More precisely, as Quine puts it: “to be assumed as an entity is…to be reckoned as the value of a variable.” And, again, the point of variables is that they are non-specific. That is, they don't name particulars. As Quine points out, variables are therefore like pronouns (e.g., 'it', 'this').


What’s the point of these logical substitutions to the originals? It's to stop us naming non-existents and thus escaping from Plato’s beard.


(The reasons for this approach can't be gone into here. I suggest that the reader consult Russell’s original paper.)


This distinction between meaning and reference had already been well made before Quine; though Quine uses it to get back to the Pegasus problem he tackled earlier in the paper.


The reason why McX made his mistake about thinking that names must refer is that he “confused the alleged named object Pegasus with the meaning of the word ‘Pegasus’”. That is, he didn’t distinguish reference from meaning (as in the Morning Star example). McX thought that the meaning of the name ‘Pegasus’ must be the thing Pegasus. But, as Frege showed, if the reference were identical with the meaning, the planet Venus wouldn’t have two names.


It follows that we can now talk about all sorts of non-existents without committing ourselves to their existence. If reference isn't identical with meaning (or sense), then a name can have meaning without it having a specific reference (at least a spatio-temporal reference). And that’s what Pegasus is meant to be: a spatio temporal winged horse; not an idea in one or in many minds or an abstract object.


Quine separates meaning and reference; though what has he to say about meanings themselves? This is where Quine is much more original and less Fregean.


Quine’s position on meaning (or meanings) is quite radical (or at least it was in 1948). To put it quite plainly: Quine rejects meanings (as traditionally characterised). However, in order to stop people getting too outraged, he almost immediately says: “…[I do not] thereby deny that words and statements are meaningful.” At a prima facie level, this statement appears to contradict Quine's position. Though, of course, Quine goes on to clarify his position on meaning/s.


Quine agrees with all of us that certain locutions are either meaningful or meaningless. However, this isn't because these locutions express pre-existing entities that we call 'meanings'. Meanings aren't Platonic entities in the Third Realm; they aren't mental entities in the mind; they aren't abstract objects of any description; and neither are they mental images. So what’s left for meaning to be?


Quine clarifies his position in the following manner. He accepts that two locutions can have the same meaning. However, they don’t do so because both locutions match (as it were) a pre-existing abstract meaning that's somehow expressed by the two locutions.


Thus the meaning of a sentence is given by another sentence, rather than by it matching up to an abstract entity we call a 'meaning' or 'proposition'. If the meaning/proposition were an abstract entity, how could a locution match it at all? How can a contingent verbal locution possibly match something what is possibly a timeless non-linguistic thing? How do you match two completely unlike things?


Quine calls these different linguistic versions of the same meaning/proposition 'synonyms'. So just as single words can have their synonyms, so too can whole sentences and even, perhaps, collections of sentences.


The Epistemology of What There Is


Towards the end of ‘On What There Is’ Quine gets away from ontology and enters the realm of epistemology.


How do we describe and know what there is? Quine’s principle answer is: through conceptual schemes. Of course there are alternative conceptual schemes. However, according to Quine, they aren't all mutually exclusive. There's no one way of describing or knowing the world correctly; as the metaphysical realists may well think.


The two conceptual schemes Quine discusses are that of the physicalist and that of the phenomenalist. Simplistically speaking, the physicalist offers us a world of external objects. The phenomenalist, on the other hand, offers us a world of, amongst other things, a round sensum rather than the external object we call a 'penny'. According to Quine, both conceptual schemes have their advantages.


Quine is very easy-going about conceptual schemes…up to a point! The phenomenalist offers us a world of “scattered sense events” rather than one of objects qua objects. When we see a penny as a penny, rather than as a round sensum, we are effectively “simplifying our over-all reports”. Again, we assign “sense data to objects” to simplify things.

Posted by Paul Austin Murphy at 09:29