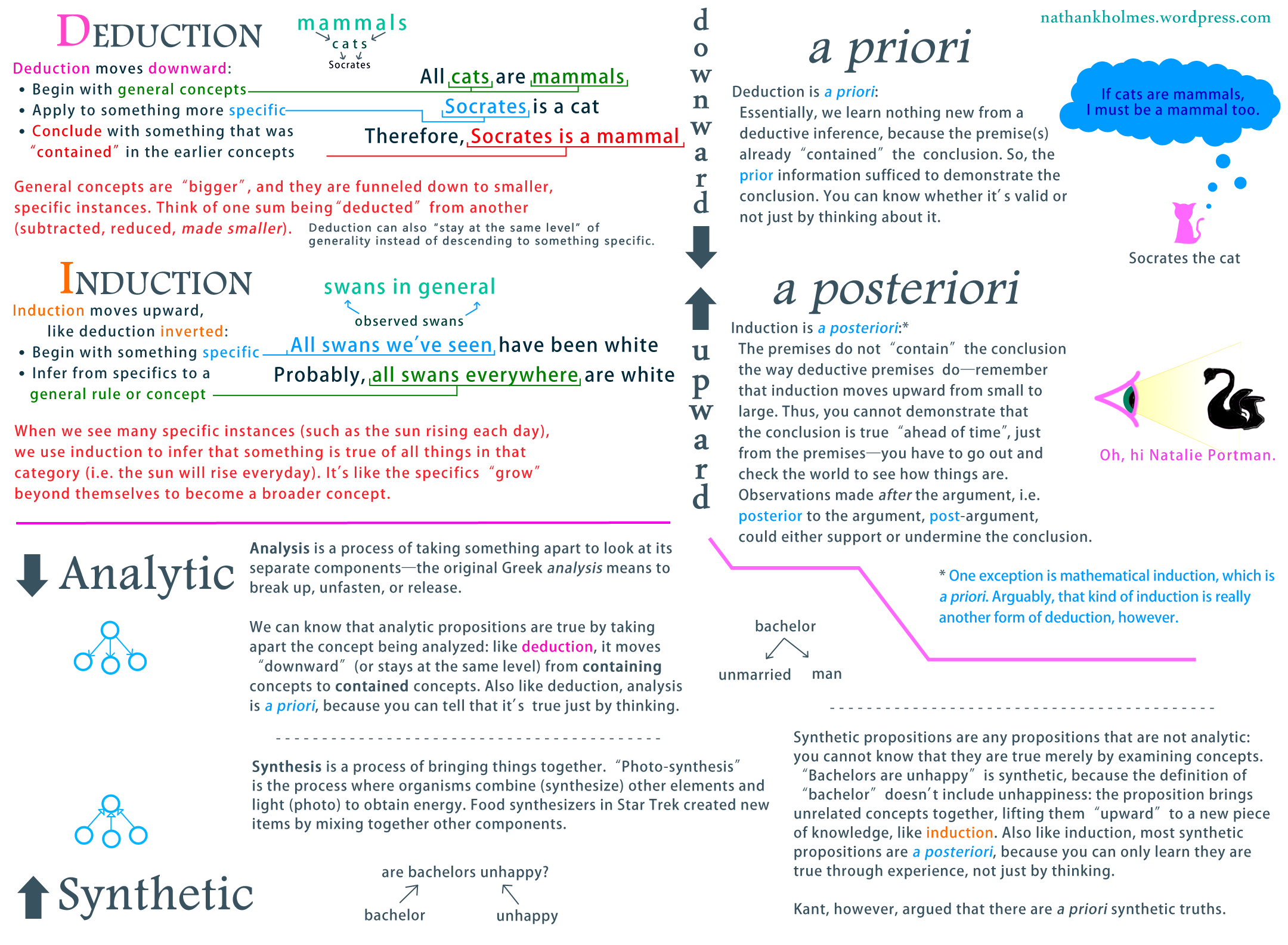 
Peter Murphy’s simple point in this paper is that nonbasic beliefs can be justified by both experiential and nonexperiential justifiers; not just by either one or the other. He's concerned with the cases


What would happen if one of the justifiers were absent? Murphy writes:


“In the absence of either justifier, one of the basic beliefs would be unjustified and, as a consequence, so too would the non-basic belief. The two justifiers function as cocontributors…” (2)


Despite that, Murphy’s prime purpose is to “rewrite” Kant’s strict binary distinction between a priori and a posteriori beliefs. He argues that in the case of the justification of a nonbasic belief which has both a nonexperiential and an experiential justifier, Kant classified the resultant belief a posteriori.


Murphy gets his point across by offering us an example which is taken from Saul Kripke. Take the following argument-frame:


Murphy says that Kripke takes (1) above to be known a priori. That is, if H and P are identical, then they're necessarily identical. The identity of H and P in this case, however, was only known (or discovered) a posteriori.


Clearly Murphy has a problem with Kripke’s classification. The basic point is that although the necessary identity of H and P only came to be known a posteriori, the modal conditional - (H=P) ⊃ □(H=P) - still holds true without experience. That is, it's known to be necessarily true a priori. So in the Kripke case, and in the case of other nonbasic beliefs, we have what Murphy calls epistemic co-contributors.


Murphy gives another example of the phenomenon of epistemic co-contribution. Firstly we have the a priori part:


i) A child’s belief that 4 + 3 = 7 might be partly a priori justified by her intellectual insight.


We also have an a posteriori part:


Murphy also gives us a similar example.Again, firstly we have the a priori part:


i) A new logic student might have a marginally reliable a priori insight into DeMorgan’s Rule.


Then the a posteriori part:


Laurence BonJour makes much of inference in his apriorist criticisms of the Quinean “web of belief” thesis. (The beliefs in this web may well be empirical; though what about the links between them?) According to Murphy, BonJour also “proposes that acts of inferring are a distinct kind of justifier” (3).

“there will be cases where the inference is justified one way and the relevant premise-beliefs are justified another way” (3).


That is, the premise-beliefs may be justified a posteriori; though their links to - or the inferences from - other beliefs will be a priori in nature. Again, Murphy makes the conclusion that if we


“[t]ake away either the a posteriori justified belief or the a priori justified inference… the person’s conclusion-belief would be unjustified” (3).


In Kant’s book, according to Murphy, we can say that


“[s]ince the conclusion-belief is dependent on an experiential justifier for its justification, Kant has us put it in the a posteriori category” (3).


That is, Kant says that the conclusion-belief is experiential or a posteriori in nature, despite the fact that it was derived from a process which is a priori (even in the case when the premise-beliefs were also a posteriori).


i) To be a posteriori justified, a belief only needs to partially depend on experiential justifiers.


However, an a priori justified belief doesn't get the same treatment from Kant. Thus:


Where does Murphy stand on the general empiricist/rationalist debate which underpins the issues just discussed?


Clearly, Murphy opts for position 4) above.