Barry Stroud on the Significance of Naturalised Epistemology 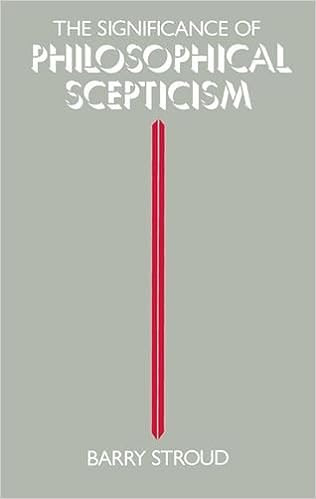 Barry Stroud makes what appears to be a metaphysically-realist point against Quine’s naturalist position. He makes the simple realist distinction between


1) Beliefs which are “constructions or projections from [sensory] stimulations” (Quine’s position).


2) Beliefs about the world.


This is the ancient sceptical question. Indeed this was the question of epistemology (at least since Descartes).


Another way of putting this is in terms of what we know. On Quine’s account, all we know about is are sensory stimulations and what we assert in response to them. We don't know anything about the world itself. Or, as Stroud puts it, from this


“we would not in addition have independent access to the world they are about on the basis of which we could determine whether they are true”.


If what Stroud is saying is correct (or if what Quine is saying is incorrect), then we can't even say that sensory stimulations - and the causally resultant assertions - are “about the world” if they aren't true of the world and don't give us knowledge of the world.


“could not be seen as a source of independent information about the world against which their own truth or the truth of the earlier beliefs could be checked”.


All this can be (partly) boiled down - or is analogous - to Bishop Berkeley's well-known statement that an ‘idea’ (or a representation or belief) can only be like another belief (or representation or belief) and not like what it's an idea of (or representation of, or belief about) in the world. Stroud, then, is referring to the traditional epistemological problem of “bridging the gap between sense data and bodies” (Quine, quoted in Stroud). Whereas traditional epistemologists saw this as a problem, the logical positivists saw it is a “pseudo-problem”. Or, as Quine put it, this move between sense-data (or Quine’s “sensory stimulations”) and bodies is “real but wrongly viewed” (quoted in Stroud).


In terms of this (logical?) gap between “data and bodies”, Quine neither sees it as a pseudo-problem nor sees it, as Kant did, as the greatest failure of philosophy. Quine’s


“positive account does not try to show how we rule out the possibility that the world is completely different in general from the way our sensory impacts and our internal makeup lead us to think of it”.


If Quine did think this, then we could say that he may as well believe that the problem of the external world (or even its existence) is a pseudo-problem if he doesn’t “try to show how we rule out the possibility” that the world may be different to what we think it's like. Perhaps there's a logical gap between data (or evidence) and the world. If there is, then why didn’t Quine think such problems are pseudo-problems as the logical positivists did? Or as Stroud puts the logical positivist (or ‘verificationist’) position:


“The traditional epistemological question of the reality of the external world and our knowledge of it was for Carnap and Schlick and other verificationists a meaningless pseudo-question; no answer to it was empirically confirmable or disconfirmable.”


We can’t get between our evidence (or data) to get directly to - or at - the world in order to match the evidence (or data) with the world. Hence the logical gap. Scientists, at least the majority of them, had always accepted that they must rely on evidence or sense-data (or ‘phenomena’ in the case of Kantian scientists like Einstein and Mach in the early 20th century). And because science had the last (and first?) word on the world or nature, if scientists happily accepted the importance of sense-data (or Carnap’s “cross-sections of experience”) when it came to world-talk, then the logical positivists did so too. As a consequence of this “deference” (Quine’s term) to science, Stroud comments that


“[f]or Carnap we must distinguish a philosophical (pseudo) employment of a form of words from an ordinary or scientific employment of the same words”.


We mustn't talk about the world or reality (its nature or existence) in the way the sceptics or epistemologists do. Instead we must speak as scientists (or even laypersons) speak. If we take the former option, we'll basically be talking rubbish.


In terms of Quine’s position again. What’s the point of accepting the possibility that the “world [could be] completely different” if Quine doesn't offer us a way out of this problem? Again, if the gap is logical, then he must surely see the problem as a pseudo-problem. However, if all we have are “sensory impacts” and a largely given “internal makeup”, then we must surely see why Quine took the (pragmatic?) position that he did take.


Despite Davidson’s criticisms of Quine’s emphasis (or very position) on sensory stimulations, Stroud writes that Quine’s position isn't like that of the sense-data theorists (or British Empiricists or the later phenomenalists). What Quine doesn't do, even with his sensory stimulations, is try


“to isolate a domain of pure sensory data evidentially or epistemically prior to the knowledge of nature that is to be explained” (Stroud).


So perhaps Quine’s position was midway between sense-data theorists’ atomism and Davidson’s holism:


And the ‘happy medium’:


iii) Sensory stimulations which are touched by belief and theory but which are nevertheless taken to ground (future) beliefs and theories. (Quine’s position?)


Stroud’s perspective seems to depend on accepting a very controversial theory of metaphysically-realist truth. (Putnam has said that, in terms of scientific truth, Quine is himself a metaphysical realist who, for example, accepts the principle of bivalence for scientific statements.)


Stroud puts this metaphysically-realist position by again questioning Quine's exclusive reliance on sensory stimulations and the resultant “projections” or “posits” we make “about the world” because of sensory stimulations. He asks Quine a simple question:


“[How do the] subject’s ‘projections’ or ‘posits’ turn out to be correct, and not just a question about how he comes to make them [?]...”


If the “world is well lost” (Richard Rorty’s phrase), or we don't have direct access to the world, then how do we know which projections or posits are correct and which are incorrect without the world telling us? (Rorty and Davidson would say that the world can't tell us anything, not even metaphorically or indirectly.) How does the Quinian decide which posits or projections are correct and which ones are incorrect? Are these decisions made exclusively on pragmatic or instrumentalist lines? (Quine, I think, wasn't an instrumentalist probably because most scientists don't take an instrumentalist position on scientific entities – save on “theoretical entities”.)


However, Quinians can't only be concerned with “how he comes to make” these projections or posits because some people come to make projections or posits about goblins or the influence of ley lines. So there's more to the Quinian story than (mere) projections and posits. That something extra is causality or causation, according to Stroud. Stroud puts this rather simple causal approach to knowledge this way. He says that we


“would see that the world around [the investigator or epistemologist] is generally speaking exactly the way he says it is and that its being that way is partly responsible for his saying and believing what he does about it”.


This is certainly largely Davidson’s position and also the reason why he believes that most of our beliefs are mainly true. We wouldn't say or believe what we do about the world if the world wasn't responsible for what we say and believe about it. That relation (or connection) between belief and the world is largely accounted for in terms of causation. (However, according to Davidson, “causation does not come under a description” and it's not in itself “explanatory”. Can this be tied to what has just been said?) This causal (for want of a better word) position may seem simple and even a little naïve. Stroud writes that


“[m]any philosophers nowadays would hold that that is enough for knowledge: the subject believes that p, he is right, and it is no accident that he is right”.


Jeff believes that p because the world is as he says it is. The world causes him to believe or say that p in a causal-kind-of-a-way. Indeed this almost has the appearance of being some kind of isomorphic relation between the world and what we say or believe about it. It's no surprise, then, that Stroud concludes by saying that the “adequacy of any such 'causal' account of knowledge is still questionable at best”.


Because of everything that's just been said about Stroud’s account (i.e., that we essentially loose the world on Quine’s alternative), then we must also accept “that countless 'theories' could be 'projected' from the sensory impacts we receive”. That's no surprise because Quine admitted this himself. As he's well known for having said the following: All theory is underdetermined by the sensory evidence. (That's also part of the story of ontological relativity, the indeterminacy of meaning and the inscrutability of reference.) That's why we must employ ‘pragmatic’ requirements and judgements when it come to theory-choice. Stroud puts this less positively. He says that because of this theory-pluralism (or theory-liberalism),


“if we do happen to accept one such 'theory' it could not be because of any objectively discoverable superiority it enjoys over it competitors”.


The theory we choose won't be a truer account of the world. It won't give us more of the world (so to speak): it will only be pragmatically or instrumentally superior (to us) than the other theories. It won't be truer or even more correct. It won't be chosen because something has been, as Stroud puts it, “objectively discovered” which places it in a superior position in terms of truth rather than (mere) pragmatic utility (or whatever). However, according to Stroud, Quine did accept an objective component to his alternative position. But that objective component is only the “meager [sensory] data” which isn't itself the world (as well as not really data or evidence on Davidson’s position). Even this pseudo-objective component doesn't amount to much because this same objective data (or evidence) can be used to construct many competing theories.

Posted by Paul Austin Murphy at 06:42