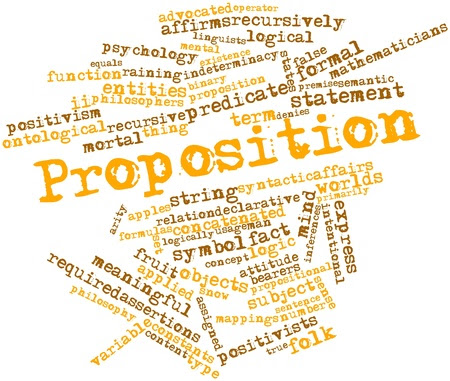 "You can't believe in abstract propositions simply because the French for 'Snow is white' is 'La neige est blanche'."


the snow is white in single quotation marks and italics (on the right side) isn't a proposition: it's the truth-condition for the antecedent sentence. Propositions, on the other hand, are believed to be either true or false. They tell us something that is or isn't the case.


In the past there have been many candidates for the role of a proposition (some of which, admittedly, were variations on a theme).


For example, are propositions the meanings of sentences or their Fregean “Thoughts”? Are they the denotations of sentences? Or, the current popular choice, are they the “set of possible worlds” which make a sentence true?


Again, it can be accepted that propositions may be distinguishable from particular sentences; though not that they can exist separately from all sentences. And if they necessarily require sentences to be the propositions they are, then perhaps propositions shouldn't have been given so much (as it were) kudos in the philosophical tradition.


Prima facie, it seems fairly easy to accept that the following sentences express the same proposition:


i) "Prime Minister David Cameron is a liar."
ii) "The current incumbent of Number Ten is known to tell lies."


Thus it's the synonymous (or near-synonymous) nature of two or more sentences that makes us think in terms of propositions. They do indeed – nearly? - say the same thing; though not because they share the same proposition.


Take i) and ii) again. We can say that they express the same proposition: that of Cameron telling lies. Can that proposition escape all sentential expressions?


It can be argued that sentences (or minds through sentences) individuate and determine the facts or states of affairs. The fact of Cameron telling lies is a gerrymandered entity. That is, what he does before he tells lies, what he does after he tells lies, the events and people which surround Cameron when he tells lies – all these are erased to create the determinate entity that is a statement.


It's not being said that Cameron telling lies or snow's being white only exists as a statement. It's the individuating that's sentential and therefore a product of minds. The concrete and abstract things which make such statements true all exist independently of minds. However, the statements which capture such things are clearly not independent of minds.


Again, it all depends on what people mean by the word "proposition".


It can be admitted that what constitutes a statement (facts, truth-conditions, abstract objects, sets of possible worlds... take your pick) exist separately from all sentences; though not the proposition itself.


Books can exist separately from libraries; though when they are brought together, they constitute a library. Nonetheless, a single book isn't a library. Similarly, many mind-independent things may be necessary for statements; though only these things plus sentences (as well as minds) are sufficient for statements which are seen to have propositional content.


This is what makes the metaphysical realist make a fundamental mistake.


Many of the constituents of truth, truth-conditions, propositions etc., for example, may indeed be “mind-independent” (or abstract) and therefore separate and separable from sentences. Realists therefore conclude that truth, truth-conditions, propositions, etc. are separable from sentences (as well as minds).