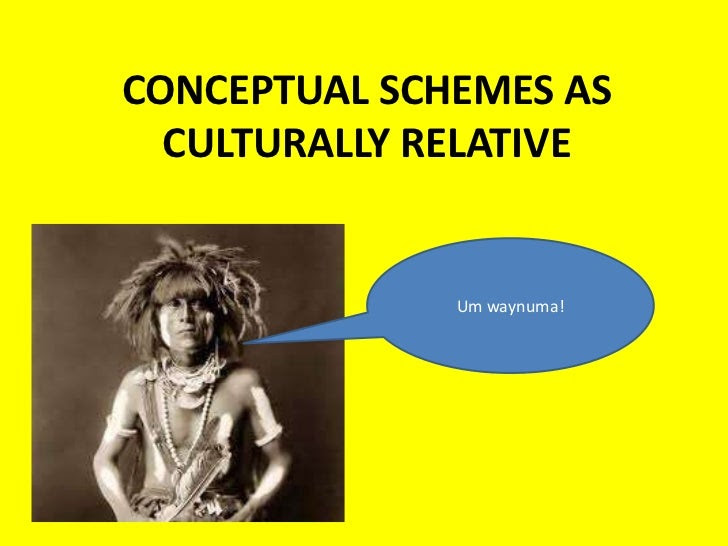 “…the Yoruba do not have a distinction corresponding to our distinction between knowledge and (mere) true belief.” (Steven Stitch, 1988)

Apart from the fact that Stitch’s distinction belongs to esoteric philosophy, would one distinction necessarily mean we don’t share a conceptual scheme (CS) or conceptual schemes (CSs) with the Yoruba? (This is to assume, for argument’s sake, that this is the only substantive - if it is substantive - difference.) This leads to the question: How many differences make a different and incompatible CS? And if a distinction were made between two different CSs, the boundary between them may well be vague. How deep must conceptual variance go before something is christened a “new self-contained conceptual scheme”? Would it necessarily mean that a new CS would or could never look out at other - possibly competing - CSs?Clearly simple differences in beliefs can’t themselves constitute differences in CSs. If it did, we’d all belong to different CSs. (In fact we’d all have our own CS.) It's when concepts and/or beliefs begin to link up that they entail/imply each other or are inferred from one another that the question of CSs arises. In the Stitch example, it would be a question of whether or not having the notion knowledge (rather than true belief) itself entails, implies or generates other concepts which form a CS. Clearly a belief in true belief isn't itself a singular belief. It is a belief made up of other beliefs. Of course we can also ask if this is just a philosophical distinction that not even members of our own culture share.


The question is whether or not we can stand outside our CS (or CSs) and judge, for example, the Yoruba of Africa. Thompson Clarke believes that we can. He writes:

“Each concept or the conceptual scheme must be divorceable intact from our practices, from whatever constituted the essential nature of the plain…observers who usually by means of our senses, ascertain, when possible, whether items fulfil the conditions legislated by concepts.” (1972)

This is quite a difficult passage to understand because of its over-laden with metaphors. Does Thompson Clarke step outside his own CS/s into another one? Or does he adopt a God’s-eye view of “the plain”? There's a hint in the above that he becomes free from concepts and CSs when he asks “whether items [sensory items] fulfil the conditions legislated by concepts”. Thus these sensory “items” (contrary to Donald Davidson’s (1973) position) seem to come first - at least on this occasion. He's certainly committed to the world’s “essential” nature when he talks of “the essential nature of the plain”.


Someone may ask what “truth is in all discourses”. And if truth is external to CSs. What if each CS has its own version of truth? However, if different so-called CSs can accept the same things (for example, that 2 + 2 = 4 and that Napoleon was an Emperor of France), then why can’t they agree on other more esoteric, recondite or controversial things? It could be that from accepting the non-contentious that one must accept the contentious (as many logicians are keen to argue). If we can talk and even agree about the weather, then perhaps we could talk and agree about more contentious issues. Or are there “language-games” about the weather?

A = A in all conceptual schemes


belong to only one CS?


And if everyone - or almost everyone - believes that Napoleon was an Emperor of France, then they must also believe many other things which are derived from or dependent upon such a belief. For example, that France once existed. That France did indeed have an Emperor. That there was a time when France didn’t have an Emperor. (This one isn’t logically derived from the initial belief.) And if we believe that Napoleon was the Emperor of France, we must also believe that there were reasons why he became such a leader. And so on.


These simple bits of logic are intended to show that the contentious can be derived from the uncontentious. This itself hopefully shows that if CSs share the uncontentious, there's nothing to stop them – logically – from sharing the contentious too. And this in turn casts doubt on the incommensurability and non-translatability theses of CSs. However, again, it doesn’t imply the possibility of an escape from all CSs into the wilderness of Nowhere, the view from which we can see the world As It Is.


There is, of course, a problem with these examples of uncontentious reasoning. For example, we could start agreeing with the metaphysical realist Nagel. He believes that the obsession with language and CSs has “contributed to the devastation of reason” (1997). He goes on to say that if we stress the importance of language and CSs generally (which are, after all, contingent), we're in effect stressing the contingencies of psychology too. And it's this approach that “leads to relativism” (1997). That is, in my sense, it leads to the denial of truth external to CSs.

Posted by Paul Austin Murphy at 23:24