Ernest LePore on the Indeterminacy of Meaning and Semantic Holism 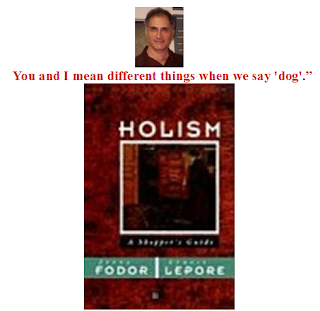 Ernest LePore says that if semantic holism (as well as, perhaps, the indeterminacy of meaning) were true, then

“you and I mean different things when we say 'dog'”.

The obvious question to ask here is: Is that really is such a bad thing? Indeed do the implications of LePore's statement actually amount to much?.

Ask yourself what it would mean – yes, mean – to say:

You and I mean the same thing by the word ‘dog’.

Of course we can both say that we mean dog by the word ‘dog’; though that won't get us very far.

The claim (i.e., “you and I mean different things when we say 'dog'”) doesn’t seem quite so outlandish if we speak instead of a word like ‘democracy’. Namely:

You and I mean different things when we say 'democracy'.

Most of us would happily accept the fact that what you and I mean by the word ‘democracy’ will be different – if only to some extent. Why shouldn’t the same - or something similar – also be the case with the word ‘dog’?

Of course the word ‘democracy’ is an abstract noun; whereas ‘dog’ isn't. Does that difference make much of a difference? It's of course easier to refer to - or pick out - a dog that it is to do the same with democracy. Though the ease of referring to - or picking out - a dog with the word ‘dog’ doesn’t necessarily mean that you and I mean the same thing – or exactly the same thing – when we use that word. Both you and I always – or nearly always - successfully pick out (or refer to) dogs with the word ‘dog’. It doesn’t follow that we do so because we mean the same by the word.

Perhaps we don’t really mean anything when we pick out or refer when we use the word 'dog'. Or, alternatively, perhaps it's our causal and historical connections with dogs - rather than our internal meanings - that really matter. In addition, perhaps you (in homage to Quine) pick out dog-parts, temporal dog-slices or doghood with the word ‘dog’; whereas I - being the very sensible person that I am - pick out dogs with my usage of the word ‘dog’.

LePore goes on to say that

“this line of argument leads to such surprising claims as that natural languages are not, in general, inter-translatable”.

Quine, according to LePore, believed this. Quine could speak fluent German – so how could he believe this?... Of course I'm being slightly rhetorical here.

What Quine did believe is that the “facts of the matter” (his own words) about, say, German meanings aren't kept complete and intact in any translation. That's because there are no facts of the matter when it comes to translation and therefore meaning! (All of this is captured in Quine's paper 'Ontological Relativity'.) There can be no one-to-one correspondence between the translation-language and object-language. There's nothing determinate to translate and there's no determinate translation. This isn't only because of the banal reason - among others - that there are certain German words which don't (really) have an English translation (at least not a precise one). It's because there are no abstract meanings – or even meanings simpliciter – to correctly (or incorrectly) translate in the first place.

The only way it would be possible to capture the true meaning would be if there were true meanings to capture in the minds of the speakers of another language. There are no such things; as Wittgenstein and others have forcefully shown. Even if there were such private things, then how could we - as third parties - gain access to them? If they did exist (as also with Locke’s ‘ideas’), then the only way we could access them would be if the translated person overtly expressed them. Consequently, if there's no lacuna when it comes to such behavioral expressions (in that they don’t really lose anything of the mental meaning), then perhaps the mental meaning can be entirely dropped from the picture because it's a - to use two of Wittgenstein's phrases - “mechanism without a function” and a possible “beetle in a box”.

“a notion of similarity of meaning (of mental content) somehow replaces the notion of semantic identity”.

What would count as similarity of meaning and how would that in itself solve the problem of meaning indeterminacy?

Posted by Paul Austin Murphy at 18:28