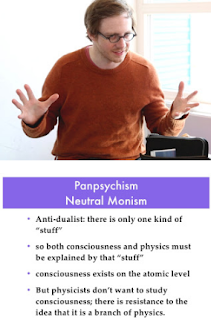 Philip Goff doesn't use the words “strong emergence” or “weak emergence” in his paper, 'The Phenomenal Bonding Solution to the Combination Problem'. Nonetheless, that distinction is at the heart of at least some sections of his paper.

The basic question is whether or not a Big Mind/Subject is more than the mere sum of “its” (that word implies weak emergence only) little minds/subjects. That is, does something additional happen when little minds/subjects are added (or “summed”) together to “constitute” (that word, again, implies weak emergence only) a Big Mind/Subject?

Having made that point, it may well be the case that I'm barking up the wrong tree in this piece. This is why.

In a seminar entitled 'On Non-Compositional Panpsychism', Philip Goff claims that the “mind is multiply located”. This, at first glance, seems to create a problem for much of what's been said above. However, Goff (in the seminar) doesn't really provide much detail for his position. And even if there are arguments in its favour, they may not make much of a difference to what's been said both above and below.

Again, prima facie, if the mind is multiply located and “wholly present many times in the brain” (as Goff also says), then that does indeed seem to create problems for the arguments expressed in the following.

However, what do Goff's claims mean? Surely if the mind is multiply located, then that seems to go against claims about “little subjects”. It also seems to rule out any point of “bonding”. That is, if the mind is multiply located (as well as wholly present many times), then there doesn't seem to be a strong requirement for either little mind/subjects or for their bonding.

One interesting virtue of panpsychism – at least on some readings - is that it doesn't appear to require any form of emergence. That is, according to panpsychism, consciousness (or experience) doesn't suddenly emerge from the physical: it's there from the beginning (i.e., in the very small parts of the brain). Yet, on the other hand, when it comes to the “combination problem”, new aspects of consciousness/experience are said to... (strongly) emerge... from these little pockets of experience. (This will be discussed later.)

How does that rejection of what's called strong emergence actually work?

Thus x doesn't emerge from its parts in any “strong” sense.

In terms of the brain and consciousness/experience/mind. The latter doesn't emerge from the former. Instead we have this:

This is how Goff puts this position:

“[M]y mind is a macroscopic entity which derives its nature from the microscopic entities which compose it, ultimately from the entities that fundamental physics talks about, which the panpsychist takes to be conscious subjects.”

Thus here we have loads of little “entities” making up a big x. Again, x doesn't emerge from these little entities. It equals (or is) these little entities. That is, if consciousness/mind is found even at the micro-scale; then mind/consciousness can't be separate from the brain – it is simply the “combination” (or "composition") of all these phenomenal brainparts. That is,

Less schematically, little pockets of phenomenal experience (metaphorically) get together to create a big subject of experience/consciousness. Yet even though we have a sum, composition or a combination, there's still no emergence of any kind. Or as Goff puts it:

Again, although the Big Subject/Mind is the combination (sum or composition) of little subjects/minds, there's still no emergence of the former from the latter.

… though not so quick!

The problem is that Goff does cite an example of strong emergence.

He does so when he gives the example of “little subjects” actually “seeing” (individually) all the “colours of the spectrum”. Then, when they these little subjects are taken together (as a single Big Subject), Goff postulates that they may bring about “a visual experience as of seeing white”. In other words, we have little minds/subjects experiencing the various colours of the spectrum summing together to produce a Big Mind/Subject which experiences the colour white. A Big Subject's experience of white is, therefore, over and above the many and varied experiences of all the little minds/subjects which constitute or “compose” (to use Goff''s term) it. Surely this is an example of strong emergence.

Thus, in all the above respects, Goff's panpsychism (at least at it impinges on the mind or consciousness) can be a taken as a kind of monism (as well being related to Donald Davidson's “anomalous monism”). More controversially, however, it can also be see as a new version of the identity theory of mind. (These links between Goff's panpsychism and other theories of mind will need to be discussed elsewhere.)

It's certainly true that Goff is well aware of the problems which phenomenal combinatorialism faces. He states the problems in various places. For example, Goff writes:

Goff concedes that when it comes to little pockets of experience and Big Minds/Subjects, we have something different. Though, again, is it strong emergence?

Goff's own scenario (as already stated) is about the sum of the little-minds' experiences creating an entirely different experience – that of a Big Mind/Subject. Thus each little subject/mind is like a little matchstick. Taken on its own, each little matchstick can't constitute a square. Taken together with three other little matchsticks, they can constitute a square. Similarly (or nearly so!) with little pockets of experience. Taken individually they “see” different “colours of the spectrum”. Taken together (at least in theory) they may bring about “a visual experience as of seeing white”. However, as hinted at above, these examples aren't of a kind. A matchstick square is nothing over and above the individual four matchsticks which constitute the square. In Goff's case, we have little minds/subjects experiencing various colours of the spectrum summing together to produce a Big Mind/Subject which experiences the colour white.

There is a spectrum of colour. However, would it follow from this that even if little minds/subjects did experience the individual colours of the spectrum individually, that their sum would necessarily - or even hypothetically - bring about a Big Mind/Subject which experiences the colour white?

Goff himself seems to make a distinction between weak and strong emergence when he cites his own Lego example. He writes:

Firstly Goff puts this position without mentioning consciousness or anything else directed related to this issue. He says that

That is a statement of weak emergence. Clearly, at a prima facie level, weak emergence won't do the job panpsychists want it to do. A Big Mind/Subject is something more than a mere sum of little minds/subjects (or of tiny pockets of experience).

Then Goff puts that weak emergence position as it may related to consciousness. He writes:

Here again, that position doesn't do the job panpsychists want it to do.

Thus Goff puts the strong-emergence position as it directly relates to panpsychism and consciousness. He writes:

“Intelligible emergentist panpsychism – O-phenomenal facts are intelligibly produced by, but are something over and above, the microlevel facts.”

In any case, at least that sum of little minds/subjects only includes those entities which exist within the brain. And that's why Goff has a problem with what he calls “unrestricted phenomenal composition”. He writes:

“According to unrestricted phenomenal composition, for any group of subjects, say, the particles forming your nose, my teeth and the planet Venus, those subjects are related by the phenomenal bonding relation and hence produce a further subject.”

Goff doesn't accept such examples of unrestricted phenomenal composition; just as I believe that the fusion (or simple juxtaposition/joining) of my backside, the coffee cup I'm holding at present, and the moon above me, don't together constitute yet another bone fide object. Goff writes:

“Obviously, some form of restricted phenomenal composition, according to which some but not all subjects are such that they bear the phenomenal bonding relation to each other, will be more in keeping with pre-theoretical common sense.”

Goff believes that all the relevant little minds/subjects must belong to the same brain. (Or, as Goff puts it, “the brains/central nervous systems of organisms”.) There are of course innumerable other little minds/subjects in the panpsychist's universe (e.g, in a thermostat or deep within a sea of a distant planet) which aren't at all relevant when it comes to the constitution/composition of the Big Minds of individual human beings.

Posted by Paul Austin Murphy at 03:56