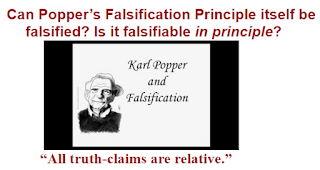 Are Second-order Statements Heterological or Homological?

In the following I'll discuss two well-known statements: Karl Popper’s Falsification Principle and what I call the Relativist Claim.

Such statements can be taken as either homological or heterological in nature. A heterological predicate, statement or sentence is one that doesn't apply to itself. The statements to be considered may well fall into this category.

For example, the statement

“All truth-claims are relative.”

Alternatively, statements can be taken as homological in nature. A homological statement is one that applies to itself. So, for example, the claim that “All truth-claims are relative” may - or even must - itself be relative to context, speaker, etc.

However, the relativist claim “All truth-claims are relative” may be heterological That is, a meta-statement which isn't self-applicable.

Possibly because such statements aree second-order (or metalinguistic) in nature.

For example, take the relativist claim again. That claim is about the first-order statements within its domain which aren't themselves (generally speaking) about truth-claims. Instead they're about objects, events, facts, observations, etc. in the world. Of course such second-order (or metalinguistic) statements can themselves be related to yet higher-order (metalinguistic) frameworks.

Nonetheless, who's to say that those who formulate such meta-statements deny that they have the property of being related to frameworks? They may concede their own status vis-à-vis higher metalinguistic languages. They may also concede that their very own statements are self-applicable. That is, they may concede (or admit) their own self-referentiality or homologicality.

However, Thomas Nagel (in his The Last Word), for example, has said that the relativist claim must itself be a victim of relativity if it's true (or if it's to be taken as true). And if that’s the case, Nagel also argues, then why should we pay it any attention whatsoever? As Nagel himself puts it (though about 'subjectivism', not relativism):

“To put it schematically, the claim 'Everything is subjective' must be nonsense, for it would itself have to be either subjective or objective. But it can't be objective, since in that case it would be false if true. And it can't be subjective, because then it would not rule out any objective claim, including the claim that it is objectively false.”

Popper’s statement has been used against - to take only two examples - Freud’s claims as well as against the claim that there may be - or are - infinite universes. Indeed it's now almost a commonsense theory, especially when used by those who're scientifically-minded. However, until Charles S. Peirce formulated his related theory of “fallibilism” (in late 19th century), such ideas were very rarely discussed. Nevertheless, the history or etiology of this theory - and the way Popper himself may have elaborated upon it elsewhere - is of no concern here. The theory is taken as it stands - as a single statement that is, possibly, self-referential or homological in nature.

Popper’s Falsification Principle states that all theories must be open to (possible) falsification. The obvious question now is:

Can Popper’s Falsification Principle itself be falsified? Is it falsifiable in principle?

If these non-falsifiable and non-falsified theories actually exist, then Popper’s theory would perhaps be either useless and/or self-defeating.

Nevertheless, is it correct to argue that if Popper’s Falsification Principle can't itself be falsified, then it must be invalid, self-contradictory or self-defeating? According to Popper himself (though not, however, according to the theory itself), no theory is ever completely certain or valid. Therefore Popper might have happily accepted the limited applicability of his own theory (despite its universal nature). Of course Popper’s principle can be given a kind of absolutist, axiomatic or normative status. If Popper had done so, then he might have allowed his theory an escape which is denied to all other scientific or philosophical theories. He might have therefore allied himself with, say, theologians or non-naturalistic metaphysicians.

In any case, perhaps relativists don't really offer us a concept or theory of truth. That is, if the relativist claim is second-order, then (just like Verificationist Principle), it may also be normative, stipulative, prescriptive, etc.

To recapitulate a little.

Popper argued that theories and hypotheses must allow the possibility of their own falsification or refutation; though not – obviously - their actual falsification or refutation. Is Popper’s theory of falsifiability or refutability itself falsifiable or refutable in principle? If it isn't, then it may be self-contradictory. If it can actually be falsified, then it may be self-defeating.

[See my 'Was the Verification Principle Self-referentially Contradictory?' and 'Heterological & Homological Metalinguistic Statements'.]

Posted by Paul Austin Murphy at 00:26