Some Arguments Against Analytic Metaphysics: Realism (2) 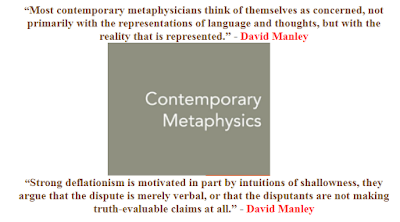 Professor David Manley (at the University of Michigan) believes that

“[m]ost contemporary metaphysicians think of themselves as concerned, not primarily with the representations of language and thoughts, but with the reality that is represented”.

Manley goes on to write that “this approach in mainstream metaphysics” has “only come to ascendancy lately, and is still widely challenged”.

“is concerned with the foundations of reality. It asks questions about the nature of the world, such as: Aside from concrete objects, are there also abstract objects like numbers and properties? Does every event have a cause? What is the nature of possibility and necessity? When do several things make up a single bigger thing? Do the past and future exist? And so on.”

So what if another metaphysician were to say the following? -

The idea of there being “foundations of reality” is preposterous.

It can even be said that talk of “the nature of the world” (rather than, say, the plural natures) begs a few questions too. In addition, why accept any distinction between abstract and concrete objects? Or, alternatively, perhaps there are other kinds of objects. Perhaps some metaphysicians even question that there are events in the way that others question the existence of objects. And so on and so on.

Possibly all these questions can legitimately exist and it still be acceptable to talk about “the foundations of reality” and “the nature of the world”. After all, the discussion must start somewhere. And even if a metaphysician rejects everything contained in Manley's short descriptive account of metaphysics, these basic distinctions are still accepted by many metaphysicians.

In a very basic sense, this approach is classic metaphysical realism – however you slice it. Thus many other philosophers will be mad (or sad) that this is still the current paradigm for contemporary metaphysicians. Then again, anti-realism (to take one alternative to this) has only ever been one option in metaphysics.

It may need to be added here that even though these realist (or non-deflationary) metaphysicians are concerned with “the reality that is represented”, they may still be very concerned with what contemporary science has to say on this or on similar subjects. After all, if science (as with Quine) tells us “what is”, then a realist metaphysician needs to listen to science. Nonetheless, metaphysicians who've been strongly committed to the findings of science have also taken various anti-realist positions. Manley himself (again) stresses the importance of science to both realist metaphysicians and their opponents. He writes:

“And the preferred methodology for answering these questions is quasi-scientific, of the type recommended by W. V. O. Quine, developed by David Lewis...”

Many people who're deeply suspicious of analytic metaphysics will be keen on the position Manley describes as “strong deflationism”; which is a term also used by Ted Sider in his paper/chapter, 'Ontological Realism'. (That's if people who hate metaphysics will even care about a position which criticises metaphysics.) The position of strong deflationism is, of course, still a metaphysical position. Indeed whatever position you take on the world (or on anything else for that matter) will contain some assumptions (or even explicit beliefs) which are metaphysical in nature.

What is strong deflationism? According to Manley, it's

“[m]otivated in part by intuitions of shallowness, they argue that the dispute is merely verbal, or that the disputants are not making truth-evaluable claims at all”.

All “merely verbal”? Perhaps not. One is tempted here to make the possibly trite point that there must still be the way the world is. And that is metaphysics. In addition:

Furthermore, what does “shallowness” mean here? What are (realist?) metaphysicians “shallow” about? Why is what they say shallow? What can they say – metaphysically or otherwise – which isn't shallow? And is it really the case that a dispute – any dispute – can be “merely verbal”? Is that possible - even in principle?

Despite my own questions, Manley goes on to say that “[i]n its new forms, strong deflationism poses as serious a challenge to metaphysics as ever”.

The “mild deflationist” position (as enunciated by Manley) is difficult to grasp. Manley tells us that mild deflationists “admit that there is a genuine dispute at issue”; though they also believe that “it can be resolved in a relatively trivial fashion by reflecting on conceptual or semantic facts”. Moreover, “nothing of substance is left for the metaphysician to investigate”.

I can't see how all that works.

If these mild deflationists admit that there are “genuine disputes” here; then how can they be entirely resolved by “reflecting on conceptual or semantic facts”? Concepts and semantics are of course important; though they can't possibly tell the whole story. Unless that remainder is - by (semantic) definition - “trivial” (or “nothing of substance”). But what the hell does that mean? The only situation in which I can conceive of this position (as stated) working would be when it comes to the position of linguistic idealism (or perhaps some other form of idealism) - and even then I'm not sure. Of course the simple solution to my quandary may be to read more of what these mild deflationists actually have to say on the subject.

It's not surprising, then, that Manley rounds off his description of mild deflationism by saying that

“mild deflationists tend to be motivated more by intuitions of triviality than by the intuition that nothing is really at issue in the dispute”.

Here again we see the word “triviality”; which is troubling. Moreover, Manley hints that if these mild deflationists aren't motivated “by the intuition that nothing is really at issue in the dispute”, then doesn't that mean that they may well believe that something really is at issue in these disputes? And if that's the case, then how is the mild-deflationist circle squared?

In any case, can any dispute be merely verbal in a literal sense? Can any dispute be entirely “due to differences in the way the disputants are using certain terms”? Despite saying that, perhaps the problem is taking the phrase “merely verbal” too literally in the sense that surely no one really believes that any dispute is all about semantics and/or language.

Strawson once wrote on what he called “revisionary” and “descriptive” metaphysics (as expressed in his 1959 book, Individuals). More relevantly, Strawson stressed the importance of our “conceptual scheme”. That is, we only get at the world (or nature) through our conceptual scheme. It isn't given to us in its pure form. We are embodied creatures after all - with contingent brains, minds, languages, concepts, sensory systems and the like. Thus, almost by definition (or, dare I say, necessarily), we could never get the world as it is.

So perhaps this works against metaphysical realism. That is, even if Strawson's conceptual scheme (like Kant's) is “universal”, it's still the case that we don't get the world as it is. Perhaps we can't (yes, the modal verb 'can't') get the world as it. However, I suppose that if what we share is universal (at least in the Kantian sense), then perhaps our limitations -vis-à-vis discovering the world as it is - don't really matter. The problem is, metaphysical realists have always had a problem with Kant's position; just as they'll have a problem with Strawson's.

Whereas Strawson emphasises our conceptual scheme, so Rudolf Carnap emphasised “conventions”, “frameworks” and the like.

Carnap believed (at least at one point in his career) that truth is an “internal question” (as discussed in his 1950 'Empiricism, Semantics, and Ontology'). That is, truth is internal to a specific “convention” or “scheme”.

However, can't the metaphysical realist immediately ask why a philosopher would choose a particular convention or conceptual scheme in the first place? For example, why did Carnap adopt the “framework” of what he called the “thing-world”? Why didn't he choose one which postulated abstract objects or goblins?

We could say that realist truth (in some form) is lurking in the background, despite Carnap’s protestations against “external questions” on the outside of all schemes, frameworks or conventions. Thus just as the truth of the thing-language is an internal question, so too is the question of truth itself before it's applied to a thing-language or to anything else for that matter.

Conventionalists, however, may say that we have good philosophical or even scientific reasons for adopting conventions. So what are those reasons? If they're reasons outside frameworks, schemes, or conventions, then doesn’t the conventionalist thereby stop being a (total/complete) conventionalist by adopting those external reasons?

I guess that metaphysical realists would happily accept that we need conventions. No problem there. The realist can’t say anything without conventions; even if these conventions do indeed capture (in some way!) the actual nature of the world.

Thus why can’t the metaphysician still be a realist and also accept (with the conventionalist) that there's more than one description (or explanation) of a given “space-time point” (as Carnap put it in his ontology), event or object? Why must a realist uphold a single “correct description” of a given space-time point or of any aspect of the world? That, surely, isn't necessarily entailed by realism. (Think here of Edmund Husserl’s “profiles”.)

It's true that conventions, frameworks or schemes aren't forced on us by nature. (What would it mean to have such a thing forced upon us by nature?) Some/many metaphysical realists may well accept that nature doesn’t force itself on us. However, we still have causal interactions with nature and these causal interactions impinge on us - even if they don’t force us to speak nature's very own language. However, nothing thereby forces the realist to say, “There are quarks and planets.” Despite that, there are causal, observational, theoretical, philosophical, etc. reasons for him to say what he says.

Again, of course conventions, frameworks schemes are freely chosen and contingent. The metaphysical realist can accept that. So perhaps the "nature forcing itself on us” metaphor isn't very helpful in this debate. Indeed was it really the case that, for example, all metaphysical realists were horrified by Henri Poincaré's admission (as found in his Science and Hypothesis) that contradictory scientific and geometric principles or theories can be maintained at one and the same time? Why can't the metaphysical realist accept Poincaré's position too? You could accept and still believe that your principle (or theory) is disconfirmable in the future. Therefore the realist must accept and live with the alternative descriptions (or explanations) of the world even while accepting that, of course, some are true/correct and others are false/incorrect. Thus one can be a metaphysical realist and say that “there is a way the world is” and still happily live with alternative descriptions (or explanations) of the world.

*) See my 'Some Arguments Against Analytic Metaphysics (1)'.

Posted by Paul Austin Murphy at 08:04