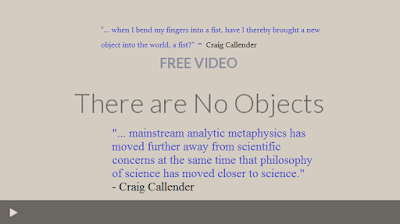 According to Craig Callender (in his paper 'Philosophy of Science and Metaphysics'), it's the case that

“mainstream analytic metaphysics has moved further away from scientific concerns at the same time that philosophy of science has moved closer to science”.

Callender's position, prima facie, is very similar to that expressed by the logical positivists (in the 1930s and 1940s) when it it came to various (or all!) metaphysical disputes.

“The reason is that it's hard to imagine what feature of reality determines whether a fist is a new object or not. How would the world be different if hands arranged fist-like didn't constitute new objects?”


The begged answer is: No difference whatsoever.

Take also the case of A.J. Ayer when writing about the rival claims of metaphysical pluralism and monism. In his book, Language, Truth and Logic, he wrote:

“... the assertion that Reality is One, which is characteristic of a monist to make and a pluralist to controvert, is nonsensical, since no empirical situation could have any bearing on its truth.”

“I come at the question simultaneously convinced that many debates in analytic metaphysics are sterile or even empty while also believing that metaphysics is deeply infused within and important to science.”

Moreover, it's not only that one must accept metaphysics even when one also places science in an/the important position. It's simply that one simply can't avoid metaphysics – not even in science itself.

“... we have these concepts, 'metaphysics' and 'sciences'. There is no sharp difference between the two. To a rough approximation, we can think of metaphysical claims as more abstract and distantly related to experiment than scientific claims.”

“I think that what we conventionally call science in ordinary affairs is inextricably infused with metaphysics from top (theory) to bottom (experiment). If this is right, metaphysics is deeply important to science. Laying bare the metaphysical assumptions of our best theories of the world is a crucial and important part of understanding the world.”

Not all analytic metaphysicians ignore science.

Sider doesn't ignore or disparage science. Or, rather, he sees (much?) analytic metaphysics as being “quasi-scientific”. In his paper, 'Ontological Realism', Sider writes:

“[Metaphysicians'] methodology is rather quasi-scientific. They treat competing positions as tentative hypotheses about the world, and assess them with a loose battery of criteria for theory choice. Match with ordinary usage and belief sometimes plays a role in this assessment, but typically not a dominant one. Theoretical insight, considerations of simplicity, integration with other domains (for instance science, logic, and philosophy of language), and so on, play important roles.”

It may also be interesting to mention panpsychism here.

Panpsychists (or at least some of them) have the same position as Sider on this aspect of the debate. They see their own theories as being quasi-scientific. That is, they stress

“competing [panpsychist] positions as tentative hypotheses about the world, and assess them with a loose battery of criteria for theory choice”.

And they too emphasise “simplicity”, “integration”, and (to use a word often used by Philip Goff) “parsimony”.

This isn't a surprise. All sorts of unlikely candidates can be seen as being quasi-scientific or indeed plain scientific. Marxism and Freudianism, for example, were also seen as being scientific. Indeed the Austrian-American philosopher Paul Feyerabend even stressed the scientific nature of astrology and voodoo.

For example, in his book, The Trouble With Physics, Lee Smolin (when he was discussing what makes something a science with Feyerabend himself) wrote:

“Was it because science has a method? So do witch doctors. Perhaps the difference, I ventured, is that science uses math. And so does astrology, he responded, and he would have explained the various computational systems used by astrologers, if we had let him... Newton had spent more time on alchemy than on physics. Did we think we were better scientists than Kepler or Newton?”

In other words, we need to be careful when people drop scientific technical terms into their discourse. Or, alternatively, we need to be careful when theorists or philosophers include certain aspects of science; though who also ignore (or reject) what could very well be far more scientifically important or relevant when it comes to the legitimacy of their non-scientific (or strictly philosophical) claims.

So let's take a few seemingly extreme positions in analytic metaphysics (or plain metaphysics, for that matter).

Peter van Inwagen, for example, believes that only elementary particles and living organisms exist. That is, he believes that cups, tables, planets, etc. don't exist....

Mereological nihilists also believe that only elementary particles exist; or that they're the only genuine objects.

Mereological universalists, on the other hand, believe that any arbitrary combination of otherwise separate objects can - or do - constitute a further object. That means that your own arse and the sun above it can (or do) constitute a single object.

It's the nature of these metaphysical beliefs which are often deemed to be “bizarre” and “trivial”. (Can the trivial and bizarre exist side by side?)

“... when I bend my fingers into a fist, have I thereby brought a new object into the world, a fist?”

Well, it's certainly true that something must have changed when Callender bent his fingers into a fist. His hand changed its shape for a start. Did that change - in and of itself - constitute a different (or new) object?

Does this fist-clenching constitute (as Callender himself puts it) something “deep [and] interesting, about the structure of mind-independent reality”? It's hard to say because it's difficult to understand the question. And even if the question can be understood, how would we know how to find a determinate (or even any) answer to that question?

We can excuse analytic metaphysicians by saying that this example – or other less rhetorical ones – may provide us with the means to establish what an object is; as well as how we can decide that issue.

We may agree with David Chalmers here and say that this is merely a “verbal” dispute; or a dispute primarily about definitions. That is, we can define a clenched as a separate object to a hand if we want to. On the other hand, we may decide not to do so. How would we decide which definition (or position) is the correct one? Can we decide that - even in principle? Does this issue take us beyond the verbal and tell us about the “structure of mind-independent reality”? Indeed forget mind-independent reality:

What does this issue or position tell us about reality - full stop?

A mereological nihilist will say that neither the hand nor the clenched fist are objects. So does this position take us beyond the verbal or definitional? And if it does, then how does it do so?

The 4-Dimensionalist will say that the clenched fist is a “temporal part” of the hand. Again, does this position take us beyond the verbal or definitional?

Indeed if all these positions are essentially about definitions and verbal descriptions; then, arguably, we can ask if they're genuine metaphysical positions at all.

If Craig Callender hadn't chosen what can be seen as straw targets, then perhaps we can take these metaphysical positions more seriously. The question is: Are they straw targets?

Take Callender's next example; which seems even more absurd than the one just cited. Callender writes:

“.... whether a piece of paper with writing on one side by one author and another side by a different author constitutes two letters or one...”

One's first reaction to this may be:

I simply can't be bothered with it! Does it matter? Are there really metaphysical implications to this question? Is it, again, all verbal or definitional?

Nonetheless, one example does appears to be a reference to a more concrete case; which was originally cited by Quine in his paper 'Ontological Relativity' (1968). Callender writes:

“... whether rabbit-like distributions of fur and organs (etc.) at a time are rabbits or merely temporal parts of a rabbit.”

Quine - when talking about “ontological relativity” and the “inscrutability of reference” - used the example of rabbits in a specific field of vision. Nonetheless, this was a question about interpreting the meanings of aliens who spoke a language the researchers didn't understand. Thus, in one respect, this isn't (strictly speaking) a metaphysical issue at all; it's either a question in semantics or one in epistemology (or perhaps both).