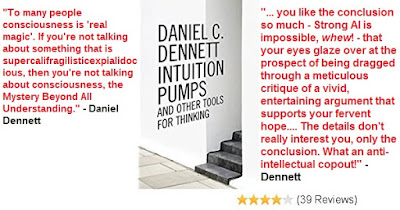 Is that automatically a bad thing?

Having said that, in Dennett's book, Intuition Pumps and Other Tools for Thinking, some of his ad hominems against his detractors are terrible: i.e., really blatant and crude. So, yes, I was a little surprised by the many dismissive and crude comments Dennett uses against his philosophical opponents.

Here are some examples:

“We found his [John Searle's] though experiment fascinating because it was, on the one hand, so clearly fallacious and misleading argument, yet, on the other hand, just as clearly a tremendous crowd-pleaser and persuader.”

“You don't want me to disable this device [this person's “intuition pump”]; you like the conclusion so much – Strong AI is impossible, whew! - that your eyes glaze over at the prospect of being dragged through a meticulous critique of a vivid, entertaining argument that supports your fervent hope.... The details don't really interest you, only the conclusion. What an anti-intellectual copout!”

“I am suggesting, then, that David Chalmers has – unintentionally – perpetrated the same feat of conceptual sleight of hand in declaring that he has discovered 'The Hard Problem'.”

[The last quote may be a little unfair to Dennett because he does, after all, use the word “unintentionally”. However, I'm struggling to see how David Chalmers could carry out a “conceptual sleight of hand” and do so “unintentionally”.]

Having quoted all that, the very mentioning of someone else's ad hominems (rather than his arguments) could itself be deemed to be an example of an ad hominem. Then again, one shouldn't take a pure or absolute position on ad homs. Sometimes they may be perfectly acceptable. In any case, I said that I was surprised by Dennett's ad homs. I also said they were crude. I didn't say that ad homs - in and of themselves - are automatically a bad thing.

To put more meat on that claim.

For a long time I've thought that Dennett believes that many/all the philosophers - and other people - who don't agree with his philosophical views are... well, religious – or, at the very least, that they have "secret religious leanings" (not Dennett's own words!). Now that's simply false. It may be true about some of Dennett's critics; though it's certainly not true about all of them. And even if some of Dennett's critics are indeed religious, he (as a philosopher) shouldn't simply assume that they are. What's more, he must still concentrate on their arguments.

I certainly suspect that Dennett is a little dogmatic when it comes, specifically, to his behaviourist and verificationist positions on philosophical matters. Though, at the same time, I also feel that I'd need to conclusively refute all his arguments before I could class him as dogmatic.... which is a silly position, I admit.

So it can certainly be said that materialists/physicalists/reductionists/verificationists/scientists/etc. can be dogmatic - as can those who uphold literally any position on any subject. Anti-materialists/etc. can be dogmatic too. This is why it's wise to make a distinction between materialism/reductionism/verificationism/etc. and those people who uphold these philosophical positions.

Posted by Paul Austin Murphy at 19:55