Strong AI: Does Intelligence Always Come Along with Consciousness or Mind? 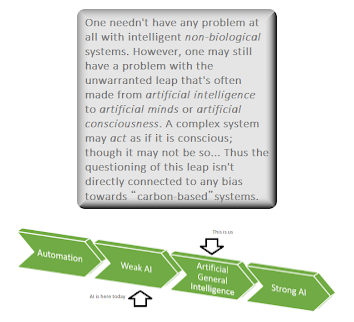 The critics of Strong AI don't need to take an absolute position against it. They may simply have problem with, for example, the particular arguments of a particular philosopher or commentator. In other words, they can also (at least in theory) accept Strong AI and reject someone else's arguments for it.

Thus critics of Strong AI don't need to believe that non-biological systems “will never be genuinely intelligent” or even that they'll never have consciousness or minds.

So you can still adopt a position which has nothing strongly to do with any biological-artificial dichotomy.

Let's put it this way. There are many natural/biological things which don't display intelligence (though that will depend on definitions) and which don't have (or display) any form of consciousness. On the other hand, there are many non-biological (or "artificial") things which do display (or have) intelligence. This means that there's no necessary or absolute link between the natural/biological and intelligence or between the artificial and a lack of intelligence. The same may even be true of mind, consciousness and experience.

In addition, if a system displays intelligence or "acts intelligently", then one could also argue that, by definition, it must also actually be intelligent. And that brings us to intelligence as dealt with in a more abstract way.

This means that it can be argued that computers (or non-biological complex systems) are already intelligent.

Thus, as it is, one doesn't need to be that sceptical (if that's the right word) about the intelligence of complex non-biological systems. However, one can (still) be sceptical about computer minds and computer consciousness.

Let's move back to intelligence.

Of course I would need to defend this position that there is, in fact, an intelligence-mind(consciousness) dichotomy. And this position is also complicated by the simple fact that many people define these words in different ways.

Some people also argue that because “a computer is programmed to be intelligent” (as it's often put), then it can't be “genuinely intelligent”. But that does't follow. Or, more correctly, it doesn't automatically follow.

Human beings (especially very young human beings) are also programmed - if in a loose sense! They're fed a language and information; and then they use both. Sure, they show a certain degree of flexibility - even at a very young age. Then again, so too do some computers.

In terms of the human “flexibility” again. Of course many philosophers question agency (or "free will") when it comes to human beings too. They also doubt that human beings are genuinely autonomous.