The Jungle of Rival Conceptual Schemes 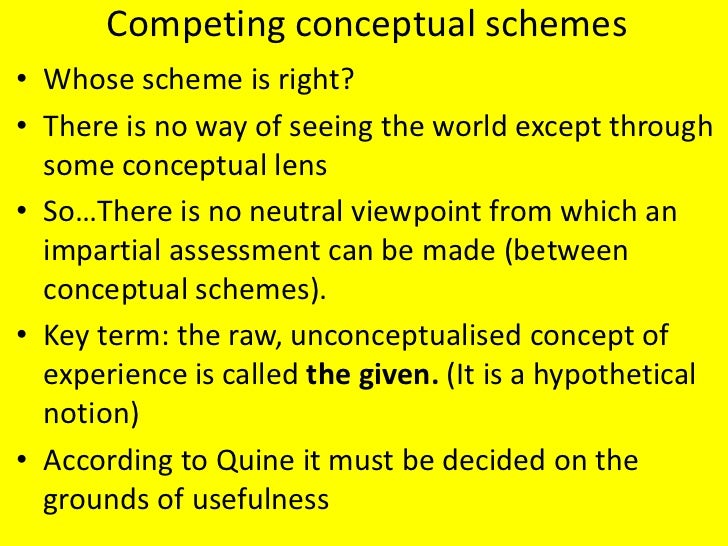 Tony le Mesma: What we all do, we are all channellers. We channel from within to without.
Alan Partridge: I’m going to pin you down here. Can you be more specific?
Tony le Mesma: I am a man who harnesses the harmony that is within us all.
Alan Partridge: That’s more vague…I want you to be more specific.
Tony le Mesma: We have within us a consciousness which is only partially realised.
Alan Partridge: I think I know what you’re saying. Are you saying that if I, Alan Partridge, harnessed the harmony or spirits within me. And somehow channelled the energy up some kind of conduit of consciousness. A cloud…of…I’m sorry, I’ve absolutely no idea what I’m talking about. I’m completely lost.

- From Knowing Me, Knowing You, with Alan Partridge

Can two competing conceptual schemes (CSs) both be true? Is truth defined internally to each particular CS?


William P. Alston [1979] said that it may be “a piece of outrageous imperialism” to reject the CSs (or Wittgensteinian “language-games”) of what he called “different spheres of discourse”. It's easy to find problems with such a tolerant pluralism because it seems to allow anything to be uttered (even things against tolerance and liberalism); so long as it belongs to a particular “discourse” and is (presumably) internally coherent. Wittgenstein, for example, was particularly keen on religious language-games.


There's a problem with religious discourse (or language-games). If a religion has its own discourse (which may well be self-contained, internally consistent and coherent), does that automatically mean that it does (or can) utter truths? Some coherentists will say, “Yes”. Thus one religion (or quantum physicist!) may say: Both A and not-A. Or, more likely, what if one religion says P and another religion says not-P? (For example, “God is always one” and “God is three in one”.)


Interestingly enough Alston gives various – acceptable? - examples of alternative discourses. They include “common sense talk about the physical environment”; “talk about personal agents”; “moral discourse”; “religious discourse”; “scientific theorising”; and “experiential reports”. The problem is that all these examples are not of a piece. Some are mutually contradictory (or potentially so). Others aren’t (necessarily) contradictory.


For example, “common sense talk”, “scientific theorising” and “experiential reports” needn't always contradict one another. (They may if you're an elimitivist; though not necessarily if you're simply some kind of reductionist.)

“Here we have two competing conceptual schemes, a phenomenalistic one and a physicalist one. Which should prevail? Each has its own advantages…Each, I suggest, deserves to be developed. Each may be said, indeed, to be more fundamental, though in different senses: the one is epistemologically, the other physically, fundamental.”


We can, however, be liberal and tolerant – though only up to a point.


For example, there are no immediate problems with Nelson Goodman’s position in this intelligent passage:

“…many different world-versions are of independent interest and importance, without any requirement or presumption of reducibility to a single base. The pluralist, far from being anti-scientific, accepts the sciences at full value. His typical adversary is the monopolistic materialist or physicalist who maintains that one system, physics, is pre-eminent and all-inclusive, such that every other version must eventually be reduced to it or rejected as false or meaningless…The pluralists’ acceptance of versions other than physics implies no relaxation of rigor but a recognition that standards different from yet no less exacting than those plied in science are appropriate for appraising what is conveyed in perceptual or pictorial or literary versions.” [1978]


Elsewhere Goodman says that “we should take seriously the metaphors that artists use to restructure our worlds”.


However, Goodman wasn't saying that “anything goes”. He wasn't taking a position similar to Paul Feyerabend’s. (Did Feyerabend think that fascism goes?) Goodman was a mitigated pluralist. Indeed Goodman himself would have accepted reductionism within certain limits.


Thus artists can be physicalists too. And Goodmanian pluralism needn't – and didn't – countenance Feyerabend’s voodoo or Alston’s Wittgensteinian position on religion.


There’s a further problem with Wittgensteinian liberalism towards CSs. It means that there can be no scientific criticism (even after taking on board Goodman’s animadversions against “monopolistic materialism”) of religious language-games (or any language-games for that matter). No philosophical criticism either. Religion, or voodoo, is let off the hook. The Wittgensteinian view (taken further, perhaps, by Peter Winch and D.Z. Phillips) leaves all language-games beyond criticism not only from science, but from logic and philosophy too. That will be because nearly all such criticisms will evidently be coming from domains outside the religious language- games themselves.


Surely this is far too convenient. What if truth is truth in all domains and actually transcends them? What if truth doesn’t change its aspect simply because it's internal to different CSs?


Can a mystic, therefore, come along and say the following? -

On my view (derived from Wittgenstein), which is wide, coherent and consistent, cats are made of cheese.


This is why many people still admire and sympathise with the spirit (though not every letter) of logical positivism (as did Quine).


Again, we can accept different CSs (even competing CSs) as long as we aren’t too liberal and look out for contradictions between them. Putnam himself writes:

“Consider…the statement ‘The sun always moves’ and ‘The sun never moves’ which, though equally true, are at odds with each other…Rather, we are inclined to regard the two strings of words not as complete statements with truth-values of their own but as elliptical for some such statements as ‘Under frame of reference A, the sun always moves’ and ‘Under frame of reference B, the sun never moves’ – statements that may both be true of the same world.


Having sympathised with Nelson Goodman earlier, I’m not altogether happy with his position above.


There are also simple cases of mutually-supporting “frames of reference”.


For example, with the naked eye we obviously can’t see particles or fields. With the naked mind we don’t talk about “space-time regions”. Within another CS we do observe particles with scientific equipment and so too with fields (if they are actually observed and aren't "posits"). With a scientific hat on, we talk of “space-time regions”. There’s no problem here, unless one is an elimitivist of some kind.


Alston himself does give an account of what may be incompatible language-games (or CSs); unlike the examples cited earlier which he thought are mutually autonomous. He wrote:

“The ontologies of different language-games do not all fit into any single scheme. There is no place in physical space for minds, sense-data, or God. Agency cannot be located in the interstices of the physiological causal network.” [1979]


In the above Alston appears to be saying that some CSs are wrong/false - or at least potentially wrong/false. Contrary to the views of Peter Winch and D. Z. Phillips, these CSs don't – or can't – exist in splendid isolation. They contradict each other. Eliminative materialists, for example, deny the existence of propositional attitudes. Therefore eliminative materialism is at war with folk psychology. Atheists deny the existence of God. Davidson denied sensory data. Some determinists reject Alston’s “agency”. And so on. Things aren’t, after all, so cosy.


Liberalism and pluralism have their limits. Few of us are pure liberals. Many of us are mitigated liberals (or mitigated pluralists).


So whereas Alston showed us his pluralism earlier on, he now shows us the limits of his own pluralism and tolerance. Thus if he can have his limits, other people can have their limits too. Consequently, the limits of other people may include limits on Alston’s pluralism (e.g. towards “religious discourse”); whereas Alston himself hints at the unacceptability of certain CSs (e.g. determinism, eliminative materialism, relativism, etc.).


Relativists do indeed criticise other CSs.


For example, they don’t have much time for what they call “scientism” and “physicalism”. Yet according to their own standards, they aren't allowed to criticise alternative CSs. Scientism and materialism may be examples of CSs according to which the notion of truth is defined internally. They may be fairly self-contained or enclosed universes. Thus how can another CS criticise them if that very CS (i.e., relativism) is committed to the autonomy of even contradictory CSs? The conceptual relativist (or plain relativist) who appears (on the surface) to be committed to the autonomy of CSs (or language-games), must himself transcend his own CS and therefore take a bird’s-eye view of “scientism”, etc. - and he doesn’t like what he sees. Thus why should the fictional bogeyman - the Scientistic Philosopher - accept the relativist’s criticisms if, according to the relativist's own CS, truth isn't external to CSs? We could even say that the relativist is adopting an almost Nagelian metaphysical realism, without realising that he’s digging his own grave by doing so.


When we push absolute pluralists (towards CSs) far enough we always find their limits.


Pluralism is either self-defeating or self-contradictory. Just as in politics, pluralists can't tolerate anti-pluralists and mustn't be tolerant to the intolerant. Another way of putting this is that pluralism isn't (or shouldn't be) an absolute.


The more we analyse the reality of CS pluralism and tolerance the more we see that it doesn’t in fact exist. Therefore tolerance and pluralism may not be the virtues they seemed to be. Of course we're not talking politics here. In politics, pluralism and tolerance may indeed be commendable. However, an eliminativist, say, won't use his fists to enforce his CS on those who use, say, religious discourse. Thus the parallel with politics isn't entirely valid. Tolerance and pluralism in politics may be virtuous; whereas in philosophy they may be vices.


Thus William P. Alston's talk of “outrageous imperialism” (outside the domain of politics) may be misplaced. It may even be a Rylian “category mistake”.

Posted by Paul Austin Murphy at 09:22