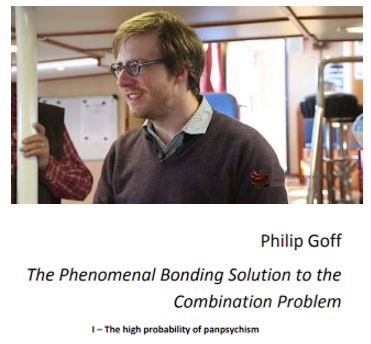 What is usually called the combination problem is said to be the most important problem facing (at least most versions of) panpsychism. This problem raises the question as to how (to use Philip Goff’s words) “little subjects” can come together in order to constitute, create or compose the mind (or consciousness) of a “larger” human subject.

In Philip Goff’s own particular case, the combination problem is solved by what he calls “phenomenal bonding”. Or, if not exactly solved, then such phenomenal bonding is simply a possible example of combination. Thus Goff attempts to explain how such bonding may actually work or come about.

In his paper, ‘The Phenomenal Bonding Solution to the Combination Problem’, the contemporary English philosopher Philip Goff states that

“[i]t is natural to suppose that my mind, the subject of my consciousness, is not a microscopic entity”.

It can be assumed here that Philip Goff must also believe that a rejection of a microscopic mind is some kind of intuitive take by laypersons on their own minds. Yet most people don’t believe that their minds are either microscopic or macroscopic entities. I say that because Goff himself has a problem with the fact that some philosophers take intuitions seriously. This must also surely mean that Goff doesn’t care too much about what it’s “natural to suppose”. So when Goff continues by saying that his

that may also be problematic.

Thinking that the mind is a whole (or a single entity) isn’t the same as thinking that it’s macroscopic… or microscopic for that matter. If Goff were talking about the brain and its parts, then there’d be no problem. However, he’s talking about the mind or consciousness. After all, the little minds (or his “little subjects”) of the brain are supposed to make up a Big Mind (or Big Subject) in this version of panpsychism. Thus Goff is arguing that every physical entity — all the way down — also has phenomenal (or experiential) properties. Or, as Goff himself puts it, the Big Mind (or Big Subject) is

“ultimately [constituted by] the entities that fundamental physics talks about, which the panpsychist takes to be conscious subjects”.

It’s certainly true that “little” atoms, electrons, quarks, etc. (or little bits of the brain) “come together” together to constitute a big brain. However, do “little subjects” come together to produce “big conscious subjects”? Goff himself says that it’s “hard to make sense of this kind of combination”.

Philip Goff uses the term phenomenal bonding to account for all the above. It’s defined in very simple terms when he states the following:

“If we identify the phenomenal bonding relation with the spatial relation it follows that, for any group of material objects, the members of that group, being spatially related, determine a conscious subject.”

Put simply, if all these little minds (or little subjects) are part of the same brain (therefore they’re all “spatially related”), then it may make some sense to argue that they can (not in Goff’s own words) “sum together” to form a Big Mind (or Big Subject).

Goff goes further than that when he continues:

“Particles form a conscious subject when and only when they form organisms (or a subset of organisms, or the brains/central nervous systems of organisms…).”

Despite that, spatial relatedness can’t be enough. After all, this cup I’m holding is spatially related to my arm. Does my arm and that cup make up a single object? In the case of the brain (as well as central nervous system), however, things are different. For one, my arm isn’t always attached to the cup; whereas little minds (or little subjects) may always be part of the same package — i.e., the brain and also, perhaps, the central nervous system. However, spatial relatedness — even in the very same package — doesn’t show us how little minds (or little subjects) sum together to form (or constitute) a Big Mind (or Big Subject). We need to know how such little minds (or little subjects) “bond” together and how that resultant sum can constitute a Big Mind (or Big Subject).

Goff, of course, recognises this problem. He writes:

“The nature of organisms and car engines are accounted for in terms of their parts, but those parts constitute the organism/engine only when related in the right way. The same is surely true of the explicability of subjects in terms of other subjects.”

It’s certainly true that Goff is well aware of the problems which phenomenal combinatorialism faces. He states these problems in various places. For example, Goff writes:

Philip Goff himself doesn’t actually use the words “strong emergence” and “weak emergence” in his paper. However, that distinction is at the heart of at least some sections of it.

The basic question is whether or not a Big Mind (or Big Subject) is more than the mere sum of “its” (that word implies weak emergence only) little minds (or little subjects). That is, does something additional happen when little minds (or little subjects) are added (or “summed”) together to “constitute” (that word, again, implies weak emergence only) a Big Mind (or Big Subject)?

Goff concedes that when it comes to little pockets of experience and Big Minds (or Big Subjects), on the other hand, we have something very different. Again, is it strong emergence?

Goff’s own scenario is about the sum of the little minds’ experiences creating an entirely different experience — that of a Big Mind (or Big Subject). Thus each little mind (or little subject) is like a little matchstick. Taken on its own, each little matchstick can’t constitute a square. Taken with three other little matchsticks, they can together constitute a square. Similarly (or fairly so!) with little pockets of experience. Taken individually they “see” different “colours of the spectrum”. Taken together (at least in theory) they may bring about “a visual experience as of seeing white”. However, and as hinted at above, these examples certainly aren’t of the same kind (i.e., they don’t belong to the same logical space). A matchstick square is nothing over and above the individual four matchsticks which constitute the square. In Goff’s case, we have little minds (or little subjects) experiencing various colours of the spectrum summing together to produce a Big Mind (or Big Subject) which experiences another colour — the colour white. A Big Subject’s experience of white is, therefore, over and above the experiences of all the little minds (or little subjects). It’s an example of strong emergence…. or is it?

There is a spectrum of colour. However, would — or could — it follow from this that because little minds (or little subjects) experience the different colours of the spectrum individually that their sum would bring about a Big Mind (or Big Subject) which experiences the colour white? How on earth would that work — either scientifically/physically or philosophically?

Goff also puts his position in a more technical way by expressing the following argument — which he rejects. Thus:

Despite that, it can still be said that the different phenomenal reality of S3 can’t be ruled out a priori. At the same time, it seems to lack any empirical or scientific credibility. It is, in fact, a case of pure metaphysical speculation (as Goff himself may admit). In addition, whereas the first position has it that “there is no state of affairs” of S1 and S2 necessitating S3, Goff also argues that this scenario “does not imply that there is not some state of affairs” of S1 and S2 having R to S3. Or in Goff’s own words:

This hinges on the (possibly false) move from

to the (possibly correct) move that is:

iii) However, S1 standing in relation R to S2 may necessitate S3.

In a seminar entitled ‘Phillip Goff on Non-Compositional Panpsychism’, Goff claims that the “mind is multiply located”. This, at first glance, seems to create a problem for much of what’s been argued above. That said, Goff (in this seminar) doesn’t really provide much detail for this position. And even if there are arguments in its favour, they may not make much of a difference to what has been argued.

Prima facie, if the mind is multiply located and (as Goff also says) “wholly present many times in the brain”, then this seems to create problems for the positions on phenomenal bonding enunciated above. That said, what do Goff’s claims mean? Surely if the mind (i.e., not minds in the plural) is multiply located, then that must surely go against claims about “little subjects” which bond together. It also seems to rule out any (strong) point of “bonding”. If the mind is multiply located (as well as wholly present many times), then there doesn’t seem to be a (strong) requirement for either little subjects or their bonding together.