Kitty Ferguson's *The Fire in the Equations: Science, Religion and the Search for God* 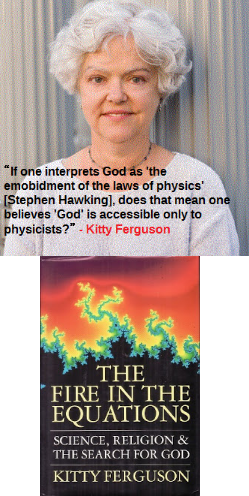 Such scientists may assume two things:

i) That the author, Kitty Ferguson, doesn't really know her science.
ii) That the science bits are really just sneaky preludes to the God and religion bits.

I should know about this, i) and ii) are what I thought... before I actually read Ferguson's book!

These scientists (if I'm not misrepresenting them) would be wrong on both counts. Kitty Ferguson really does know her science. And, secondly, the science she know isn't cheaply  shoehorned into some kind of rationalised theism or into a defence of religion generally

Kitty Ferguson expresses a degree of scepticism towards both the God of the Scientists (to rewrite the well-known phrase “the God of the philosophers”) and the God of the Theologians. And it's here where Ferguson clarifies the title of her book: The Fire in the Equations.

“If the Mind of God is only a euphemism for the sum of all the laws of physics, then God is not beyond the reach of science.”

Ferguson then allows Steven Hawking to express the limits to this God of the Scientists. Hawking writes:

“Even if there is only one possible unified theory, it is just a set of rules and equations. What is it that breathes fire into the equations and makes a universe for them to describe?”

The author offers a possible answer to Hawking's question by saying that the it “might be that the equations are the fire”.

However, Ferguson deftly sees the problem with both these positions. Firstly, she has a problem with Hawking when he said that that he “use[s] the term God as the embodiment of the laws of physics”. Surely this can't be the case. Could this really be the same God as the one worshiped and known by billions of people throughout the ages? So let's take Ferguson's response to that possibility:

“If one interprets God as 'the embodiment of the laws of physics', does that mean one believes 'God' is accessible only to physicists?”

Alternatively, could Hawking “be suggesting that the laws have a life or creative force of their own?”. In other words, is it that the “equations are the fire”?

And Ferguson spots another problem with God the Mathematician when she writes:

Thus it may be the case that, ultimately, Ferguson strikes some kind of middle ground between the God of the Physicists and the God of the Theologians. In other words, she suggests a kind of pluralism: a happy acceptance of Wittgensteinian “language games”. Thus:

“Science and religion are, for them [the pluralists], two different descriptions which together give us a fuller understanding than either description alone could provide.”

However, there is indeed a stark possible alternative to this. Namely:

“If the descriptions are mutually exclusive, then that is disturbing.”

But it's not only scientists who can be (as it were) exclusivists, so too can religious people. Ferguson writes:

“Others who believe in God deem this [Wittgensteinian?] approach unsatisfactory, saying that God, in their experience, insists on occupying a front-line position in all descriptions, all conceptual schemes, all experimental situations. This God is a presence, not merely a way of thinking about or describing the universe.”

As stated in the introduction, Kitty Ferguson does know her stuff. On almost every page there are magnificent explanations of various scientific subjects – from quantum mechanics to black holes to worm holes. There are also insights into various scientific issues. In other words, this isn't only a popular science book: it's also jam-packed with Ferguson's own very illuminating takes on physics and cosmology.

In any case, four chapters of this eight-chapter book hardly mention God or religion. And when they do, it's often only tangentially. Thus the book is indeed very roughly split into two halves; though this split is neither absolute nor is it made explicit in the introduction. Indeed even in a chapter called 'The Elusive Mind of God', both God and religion are only tackled tangentially. Here, as with three other chapters, science is primary and many pages don't mention God at all. One can even say that there's a certain sense in which the second part of the book isn't a conclusion to the first part. In many respects it flows seamlessly from the first part even though religion and God are discussed much more in the second section. It may even be the case that those who're only interested in science could skip the second part. However, I strongly suspect that Ferguson herself would see this as defeating the object of her book (or at least one of the objects of her book).

Having said that, it can be mischievously be said that Kitty Ferguson puts her own position into the mouth of a Standard journalist who was writing in 1882 after the death of Charles Darwin. On page 1, Ferguson quotes the aforesaid journalist stating the following:

“True Christians can accept the main scientific facts of Evolution just as they do of Astronomy and Geology, without any prejudice to more ancient and cherished beliefs.”

Ferguson then quotes a sermon which was given at St Paul's Cathedral by a Canon H.P. Liddon. The canon congratulated Charles Darwin on “the patience and care with which he observed and registered minute single facts”. Yet Ferguson doesn't let the canon have it all his own way either. Later on in the book, Ferguson quotes the science historian, John Hedley Brooke, stating the following:

“The trouble with such accounts [of Darwin's methods] is that they can trivialize the logic of discovery. They assume that the 'facts' were somehow there, waiting at the Galapagos for Darwin to process. Darwin himself knew better than that.”

And it's not only canons who are given a hard time. Great scientists are too. For example, Ferguson has this to say on Steven Hawking:

“In April of 1980 Hawking had the audacity to suggest we had come so far that before the end of the twentieth century we might find the theory that would explain everything that is happening, has happened or ever will happen in the universe. Eight years later he wrote that after we have that theory in hand we might just go on (not scientists alone, but all humanity) to know the mind of God. Which calls to memory an ironic piece of history trivia. In the late 1890s Prussia closed its patent office on the grounds that all possible inventions had been invented. It wasn't long afterwards that Albert Einstein, in a Swiss patent office, began toying with ideas which would revolutionize science.”

And, later, Ferguson deflates science itself in the following manner:

“... science doesn't make any claim to have discovered the ultimate truth about anything.... [Scientists] don't speak of 'the verdict of science', but of 'the standard model'... They speak of 'approximate theories'.... They speak of 'effective theories', which means that something we can work with for the present while knowing it isn't absolutely and unequivocally correct.”

This statement on science is fine because (on the whole) scientists would happily accept it. In that sense, my use of the word “deflates science” isn't quite right simply because the transitional nature of science is something in its favour. Interestingly enough, Tolstoy (among many others) saw this as a very bad thing. He wrote (in his What is Religion?) these ridiculously rhetorical words (not quoted by Ferguson) in 1902:

“What we call science today is merely a haphazard collection of disconnected scraps of knowledge, most of them useless, and many of which, instead of giving absolute truth provide the most bizarre delusions, presented as truth one day and refuted the next.”

also need to be acknowledged or taken into account. Ferguson pursues this theme later when she discusses the academic milieu of science. She comments on the phrase the “tyranny of old men” and warns of those on

In his book (not quoted by Ferguson), The Trouble With Physics, the physicist Lee Smolin roughly concurs with Ferguson when he says that

“[p]eople with impressive technical skills and no ideas are chosen over people with ideas of their own partly because there is simply no way to rank young people who think for themselves. The system is set up not just to do normal science but to ensure that normal science is what is done... I've heard many colleague say they are on what is a trendy in order to get tenure, after which they will do what they really want.”

However, as with Ferguson's words on science's transitional nature, scientists should also be happy with this acknowledgement of psychological and sociological factors within science. The problem is that many scientists most certainly aren't happy with it! They speak of “Kuhnian relativism” or “mob psychology”. Yet they should also realise that such negative quirks and political biases are – at least in principle – usually ironed out. That's primarily because, as Bertrand Russell put it, science is essentially a communal activity which has a “community spirit”. Thus, even though these negative things occur, on the whole they won't reign supreme in the world of science. This is Russell (not quoted by Ferguson) in full:

But Ferguson is sceptical here too. She asks us two questions:

i) “Will science, as an instrument for learning about reality, prove strong enough to overcome all the glitches and stumbling blocks, the fads and false leads, the good but mistaken intentions, the arrogance and the assumptions, the din of many voices urging us down one path or another?"

ii) "Is it correct to believe that eventually the truth will out?”

So of course what Russell says happens in science isn't always foolproof. Then again, it's far better than nothing. Nonetheless, Ferguson's philosophical questions about both science and the practice of science are, as ever, very powerful.

Posted by Paul Austin Murphy at 17:55