Ladyman and Ross: Every Individual Must Go? (5) 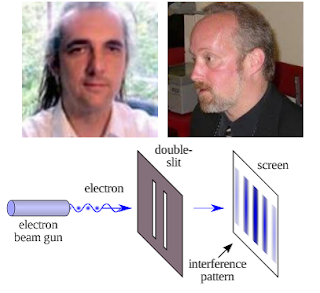 [This piece is an account of parts of James Ladyman and Don Ross's book, Every Thing Must Go: Metaphysics Naturalized.]

The Firing of Single Particles

How can we acknowledge the two-slit experiments without also acknowledging the nature and existence of single particles – or single things?

A photon (for example) is a single quantum of light. In fact it's referred to as a "light quantum" or as a “light particle”. It's also the case that single particles have been fired (in double-slit experiments) at relatively long intervals between each firing!

In terms of detail, let's forget here when particles-in-the-plural have been fired (e.g., by J.J. Thomson, Ernest Rutherford, Ernest Walton, etc.) and concentrate on the firing of single particles.

Take Pier Giorgio Merli, Giulio Pozzi and Gianfranco Missiroli who did so in the 1970s in order to demonstrate what's called “interference”. And, in 1989, Akira Tonomura and his colleagues also fired electrons one at a time at the Hitachi research laboratories. Then Herman Batelaan and his team did the same thing and the results were published in 2013.

(Alain Aspect's well-known experiment is actually said to have used many pairs of photons to demonstrate “spooky action at a distance” or “entanglement”.)

However, were single particles really fired in these experiments?

It's worth noting here that even atoms don't have rigid boundaries (or really any boundaries at all ). This is even more the case with particles. Thus these facts must surely raise particular questions as to how single particles can be fired in experiments. Having said that, this may well only be a technical (rather than scientific or philosophical) question.

Of course something must be fired.

Though is it the case that some individual thing is fired each time? Perhaps, instead, only spatiotemporal chunks (or spatiotemporal slices) of fields are fired. What can't be fired, however, are what philosophers call “individuals”, as we shall now see.

All the above is partly a terminological issue.

Take the notions of a thing, an individual and a particle again.

The word “thing” is an everyday word. It can applied to anything (or to any thing). The word “individual” (as used by James Ladyman and other philosophers) is a philosophical technical term. And, finally, the word “particle” is mainly used within a scientific context. (It's true that Isaac Newton's use of of the word “particle” is at odds with many 20th-century uses; though all such uses are still fundamentally scientific.)

Particles (such as electrons) can't be individuals (as most philosophers see individuals) simply because all the particles of a specific kind share all their properties (i.e., spin, mass, charge, etc.). So, semantically, these properties can't be seen as intrinsic or essential because particles don't actually have contingent properties. However, that's unless we bring in the relations which particles have with other things/particles or with fields! And this is where ontic structural realism comes in.

Thus, on a philosophical reading, particles - by definition - can't be individuals. Every particle of a given kind has the same properties – that's if, again, we rule out relational or spatial properties. A single particle, then, isn't like a single human person, who can easily be distinguished from other human persons. Indeed a single human person may well have both essential and contingent properties. (That will depend on one's metaphysical position.)

In addition, what Ladyman, Ross and other philosophers call “identity dependence” and “existence dependence” doesn't seem to automatically rule out an entity being an individual. Or, if it does, we'd still need to know why that's the case. And then there's the added problem of using a philosophical technical term (i.e., “individual”) and then foisting it into discussions of the particles of physics.

This also applies to Ladyman and Ross's term “self-subsistent”. If that term is taken literally, then has any entity in the entire history of the universe ever been self-subsistent? Of course all that will depend on what each philosopher who uses that term actually takes it to mean.

So if a particle can't be an individual, can't it still be a thing?

Finally, the words “particle” and “electron” are scientific terms. That must surely mean that if physicists say that “electrons are particles”, then electrons are particles. Full stop. Thus since the word “particle” is seen by both laypersons and scientists as a technical scientific term, then naturalist philosophers shouldn't encroach on the territory of physicists by questioning their usage.

In modern logic (at its most basic) we have individual objects which are symbolised by variables (such as x and y). Those variables (of objects or things) are the subjects of predication (or seen to be members of sets).

Mathematical Structures and the Physical

That's a classic question of western metaphysics and it's been asked for over two thousand years. In both quantum mechanics and ontic structural realism, we're told that fields are fundamental, not particles. More precisely, particles in Quantum Field Theory (QFT) are seen as “excitations” of fields. Thus, to state the obvious, it's particles which are the excitations of fields, not fields which are the excitations of particles.

This makes fields fundamental. Or does it? Perhaps it's a difference which doesn't really make a difference – at least it doesn't to most hands-on physicists. (As the physicist John Polkinghorne once put it: “The average quantum mechanic is no more philosophical than the average motor mechanic.”)

Here again we can question this fixation on what is and what isn't fundamental. In certain respects, physics itself shows us that particles/things aren't fundamental, despite the long history of attempts to find the fundamental entities of the world.

So let's be specific about this. When Ladyman and Ross claim that physics shows us that physical objects aren't spatially located, aren't they only referring to particles? The same is the case when they say that things aren't “self-subsistent” (yet surely macro-objects aren't self-subsistent either); they lack “primitive indentity”; and that they aren't “ontologically fundamental”.

In addition, Ladyman and Ross say that “things are nonexistent” or that “things are dependent on relational properties for their existence”. Thus can we also argue that structure/relations are nonexistent or that structure/relations are dependent on things for their existence? In concrete terms, a pragmatist or instrumentalist may say that whether or not one stresses fields or particles depends on one's explanatory or experimental purposes.

So not only can we ask Ladyman and Ross how abstract mathematical structures relate to things/objects: we can also ask how they relate to anything physical (or concrete). However, Ladyman and Ross appear to reject these questions outright when they write:


“The ‘world-structure’ just is and exists independently of us and we represent it mathematico-physically via our theories.... the fact that we only know the entities of physics in mathematical terms need not mean that they are actually mathematical entities.”


Here we need to know what's meant (philosophically meant) by the word “represent”. That is, what is the ontological (i.e., not representational) relation between structures and the “entities of physics”?


“the fact that we only know the entities of physics in mathematical terms need not mean that they are actually mathematical entities”.


So how does that admission (if it is an admission) help us? Nothing is said about physical entities. Indeed Ladyman and Ross more or less say (in a Kantian manner) that nothing can be said about physical entities (i.e., other than what's said via the medium of mathematical structures). Perhaps, then, we should bite the bullet and accept this limitation if there's no way around it.

Yet Ladyman and Ross are explicit about their Platonism (or Pythagoreanism). Or, at the very least, their position is Platonic/Pythagorean by default. They write:


“What makes the structure physical and not mathematical? That is a question that we refuse to answer. In our view, there is nothing more to be said about this that doesn't amount to empty words and venture beyond what the PNC allows. The 'world-structure' just is and exists independently of us and we represent it mathematico-physically via our theories.”


So whereas Platonists would be explicit and say it's all mathematics, Ladyman and Ross say that questions about their mathematical structuralism are “question[s] [they] refuse to answer”. Indeed they don't want to indulge in “empty words” in doing so. Ladyman and Ross are quite happy to express their Platonic and (structural) realist position by saying that the

“'world-structure' just is and [it] exists independently of us and we represent it mathematico-physically via our theories”.


Despite all that, the abstract and mathematical scheme of Ladyman and Ross does eventually give way to the physical (on concrete) when they say that the mathematical structures they endorse are “physically realized” and that the predicates they use are (as it were) attached to entities.

i) If mathematical structure x represents a real pattern y,

We can say that it's the mathematical syntax of scientific theories which is passed on - not their semantics. That is, we have a possible (or actual) structural continuity; though that only takes the form of mathematical equations.

What's more, in physics the same equations can be mapped onto (or they can model) what are taken to be different physical phenomena. This is the inverse of the “underdetermination of theory by evidence”; in which the same evidence/observations (or the same physical phenomena) can give rise to different theories.

(For those who buy string theory, we have the examples of different theories (such as type 1 and heterotic SO(32)) which are mathematically equivalent. And even in the case of Maxwell's equations for electricity and magnetism, if one interchanges the electric fields for the magnetic fields and vice versa, then the resulting equations are almost identical.)