An Ontology of an Electron 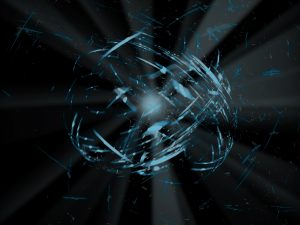 i) Firstly, we have an electron,

ii) and then we also have its properties.

More clearly, this could mean that we have an electron, and only then does it acquire properties. (Much in the same way in which a person would acquire the property being sunburned or being happy.)

It’s more accurate to say that an electron is equal to its properties. Thus:

This is the position known as the “bundle theory” and it’s usually applied to “classical” objects such as persons, cats, rocks, etc. In fact it seems that the bundle theory is more applicable to electrons than it is to, say, trees or persons.

Wheeler’s reasons for advancing this theory involve details which aren’t touched upon in this piece. In simple terms, though, different electrons are actually the same electron moving backward and forward in time. Consequently, if this theory were true, then electrons (in the plural) moving backwards in time are actually positrons (which are the antimatter component of electrons — hence anti-electrons).

Yet if there is only one electron, then that electron must be what philosophers call an individual (or particular). And that possibility moves us on to the 17th-century philosopher Leibniz.

Gottfried Wilhelm (von) Leibniz argued that all the properties of an object are essential to that object. (There are, of course, arguments against this position.) So surely this claim is truer of an electron than it is of, say, a tree or a person. After all:

i) If an electron were “loose” its properties of mass, charge and spin,

ii) then it wouldn’t be an electron at all.

Or to say the same thing with a little more detail:

ii) then it wouldn’t be an electron.

After all, these three properties are equally essential to a electron being an electron. Indeed even if it lost just one property (say spin), then it would no longer be an electron.

The problem with Leibniz’s position is that it’s only applicable to individuals (or particulars). This is how Leibniz expressed his position:

“The nature of an individual substance or of a complete being is to have a notion so complete that it is sufficient to contain and to allow us to deduce from it all the predicates of the subject to which this notion is attributed.”

The problem here is that electrons may not be individuals. That is, every electron is identical (though not numerically identical) to every other electron — save for its spatial and locational properties. (This seems to go against Wheeler’s position mentioned a moment ago.) So, on a Leibnizian reading, every electron has the same essence. Therefore every electron can’t be an individual. Boris Johnson, on the other hand, is an individual. That’s because he doesn’t share all his properties with every other person. That is, Boris Johnson’s “individual essence” (or haecceity) is not identical to, say, Swiss Tony’s individual essence.

There is another Leibnizian issue here.

According to the Principle of the Identity of Indiscernibles (PII), no two substances can be qualitatively identical yet still be (numerically) different objects. As you can see, this doesn’t work for electrons. And that’s another reason why they can’t be classed as individuals. That’s unless, as already mentioned, relational (or extrinsic) properties are included. Now, clearly, no two electrons can have the same relational (or extrinsic) properties. So, on a Leibnizian reading, how are we to treat the properties of location, etc. when it comes to electrons? Are they “pseudo-properties” which can simply be ignored? Leibniz himself believed that spatial and temporal properties are indeed genuine properties of the individual itself.

Finally, it’s partly because many laypersons (if they think about these things at all) still see electrons as not being equal (or identical) to their charge, mass, spin, etc. that they see them as also being Newtonian “hard” particles.

In quantum mechanics — and physics generally — we have the notion of a field.

In the specific case of electrons, fields and electrons are intimately connected. Indeed they’re so strongly connected that a distinction between the two hardly seems warranted.

Firstly, there’s the problem of distinguishing electrons — and other particles — from the states they “belong” to. Thus, in an example given by the philosophers James Ladyman and Don Ross (in their book Every Thing Must Go: Metaphysics Naturalised), we can interpret a given field/electron state in two ways:

i) As a two-particle state.

ii) As a single state in which two “two particles [are] interchanged”.

Since it’s difficult to decipher whether it’s a two-particle state or a single state in which two particles are interchanged, Ladyman and Ross adopt the “alternative metaphysical picture” which “abandons the idea that quantum particles are individuals”. Thus all we have are states. That means that the “positing individuals plus states that are forever inaccessible to them” is deemed to be “ontologically profligate” by Ladyman and Ross.

Ladyman and Ross then back-up the idea that states are more important than individuals (or, what’s more, that there are no individuals) by referring to David Bohm’s theory. In that theory we have the following:

“The dynamics of the theory are such that the properties, like mass, charge, and so on, normally associated with particles are in fact inherent in the quantum field and not in the particles.”

In other words, mass, charge, etc. are properties of states, not of individual electrons. However, doesn’t this position (or reality) have the consequence that a field takes over the role of an electron (or of a collection of particles) in any metaphysics of the quantum world? Thus does this also mean that everything that’s said about electrons can now be said about fields?

On Bohm’s picture ( if not Ladyman and Ross’s) “[i]t seems that the particles only have position”. Yes; surely it must be a electron (not a field) which has a position. Indeed electrons also have trajectories which account for their different positions.

Nonetheless, Ladyman and Ross spot a problem with Bohm’s theory. That problem is summed up in this way:

If all we have is trajectory, then why not dispense with electrons (as individuals at least) altogether?

This is how Ladyman and Ross explain their stance on Bohm’s theory:

“We may be happy that trajectories are enough to individuate particles in Bohm theory, but what will distinguish an ‘empty’ trajectory from an ‘occupied’ one?”

Here again Ladyman and Ross are basically saying that if all we’ve got are trajectories, then let’s stick with them and eliminate electrons (as individuals) altogether.

“[s]ince none of the physical properties ascribed to the particle will actually inhere in points of the trajectory, giving content to the claim that there is actually a ‘particle’ there would seem to require some notion of the raw stuff of the particle; in other words haecceities seem to be needed for the individuality of particles of Bohm theory too”.

If Ladyman and Ross’s physics is correct, then what they say makes sense. Positing electrons seems to run free of Occam’s razor. That is, Bohm is filling the universe’s already-existing (to mix two metaphors) ontological slums with yet more (superfluous?) entities .

One way of interpreting all this is by citing two different positions. Thus:

i) The positing of electrons as individuals which exist in and of themselves.

ii) The positing of electrons as part of a package-deal which includes fields, states, trajectories, etc. (In other words, there’s no reason to get rid of electrons completely.)

Then there’s Ladyman and Ross’s position.

iii) If there are never any electrons in “splendid isolation” (apart from fields, etc.), then why see electrons as being individuals in the first place?

Ladyman and Ross are a little more precise as to why they endorse iii) above. They make the metaphysical point that “haecceities seem to be needed for the individuality of particles of Bohm’s theory too”. In other words, in order for electrons to exist as individuals (as well as to be taken as existing as individuals), they’ll require “individual essences” in order to be individuated. However, if the nature of an electron necessarily involves fields, states, other particles, trajectories, etc., then it’s very hard (or even impossible) to make sense of the idea that an electron could have an individual — or indeed any — essence.

In simple terms, a specific electron — and any other particle — is part of a package-deal. Electrons simply can’t be individuated without reference to external, extrinsic or relational factors. Thus electrons simply aren’t individuals at all.

Posted by Paul Austin Murphy at 23:20