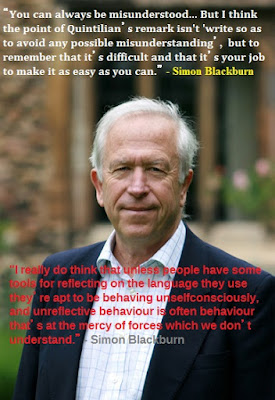 Simon Blackburn comments on the formalising tendencies which began the tradition of analytic philosophy. He traces it back to Frege. This means, among other things, that the frequent arguments against “traditional metaphysics” certainly didn’t begin with the logical positivists. It began with Frege and no doubt existed even before that (as with Francisco Suárez and his repudiation of Aristotle). As Blackburn explains it:

“Many philosophers thought that they were on the verge of replacing ‘old-fashioned woolly metaphysics' with a rigorous, formalised philosophy that had as its core a logically perfect language, shorn of the vagaries or ordinary discourse. Once we had translated philosophical problems from ordinary language into this purified language of logic, the solutions to philosophical issues would follow as surely as night follows day. That optimism only lasted until roughly the Second World War.”

Blackburn offers three approaches which philosophers since Hume have seen as been of primary importance to the whole of philosophy:

“You might say the first thing to do s to understand ourselves, as Hume does, for example; you might say the first thing you’ve got to do then is understand our language, and so do the philosophy of language; or you might think, no, what you’ve got to do is settle the nature of the world, the things that surround us and after that our own nature and the nature of language will fall out. That in a sense is the scientific approach – the rest is stamp collecting.”

So why not all these approaches at the same time? Or why not work with all three and see how they interact with each other (even if only at the peripheries)? Why the obsessive need to create a hierarchy (or pyramidical system) with one discipline at the bottom and all the rest on top of it?

One may conclude from all this that we should completely suspect the very idea of a First Philosophy and simply accept the interconnections between the philosophical disciplines. And it's one step on from this rejection of First Philosophy to take an “interdisciplinary approach” to philosophy and incorporate linguistics, computer science, cognitive science and other disciplines into its purview. This in itself can be seen as an acknowledgement of “philosophical holism” in whatever form it may take.

In summary, then, we have a “triangle” which includes psychology (or ourselves), the philosophy of language and the world itself. We needn't take any of these as being primary or fundamental.

Bad writing, technicality and sheer pretentiousness, however, shouldn't imply that all work on the minutia of philosophy should be shunned or limited. Of course not. Some papers are bound to be complex. Not necessarily because of the subject’s difficulty; but just because the issues and problems will be technical in nature and therefore have a high number of unknown technical terms. Indeed some technical terms will be needed and others may well be gratuitous – it depends on the philosopher concerned.

Blackburn makes some other interesting points about philosophical prose – at least in its bad guise. He quotes John Searle stating: “If you can’t say it clearly you don’t understand it yourself.”

So all the times I thought critically of myself for not understanding a particular philosopher’s prose, perhaps all along he didn’t understand his own prose; or, more importantly, he didn't understand the philosophical ideas he was trying – badly – to express. I assumed my own cognitive limitations or the damned complexity of the subject. However, perhaps all along it was just a case of the philosopher concerned being a bloody poor writer – regardless of the complexity of his ideas. Either that or he might well have been just plain pretentious! Certainly philosophers like this don’t follow the Quintilian dictum (as quoted by Blackburn): “Do not write so that you can be understood, but so that you cannot be misunderstood.”

Of course, literally speaking, if one writes “so that you cannot be misunderstood”, then one must also be writing “so that you can be understood” – the two approaches go together. However, Bernard Williams (also quoted by Blackburn) offered the obvious riposte to this “impossible ideal”:

It's interesting to note here that Williams’ impossible-ideal argument can also be used in favour of the idea that there will always be someone in one’s own culture - no matter how rational - who'll misinterpret at least something you write or say. Indeed perhaps everyone who reads or listens to you will misinterpret you in some small or large way. The idea of a perfect communication of a complete and perfect meaning to a perfect interpreter seems to be a ridiculous ideal. It seems to be almost – or even literally – impossible and for so many reasons. So you'll always be “misunderstood” by someone in some way. Indeed each person will misunderstand you in some way - whether that way is large or small. All we have left, as writers or philosophers, is to realise that “it’s [our] job to make it as easy as [we] can”. We can't be expected to do more than this. We can't guarantee the perfect communication of our ideas or the perfect understanding of our ideas by other people (as anyone who uses social media already knows). And even if we allow this slack, perhaps, in the end, it simply doesn't matter that much because communication doesn't require either determinate meanings or determinate interpretations. We seem to manage quite well in most situations without perfect languages and other philosophical ideals. It's only certain philosophers who get hot under the collar about the possibility (or actuality) of the problems of meaning or translation. You can't (to use Derrida's term) “mathematicise” meaning or interpretation/understanding. We now know, after all, that formalised or artificial languages have many severe limitations and we can even say that natural languages are far more expressive and pragmatically efficacious than even the sum of their alternatives.

On the Importance of Philosophy

Blackburn comments on the importance of philosophy and places it within the wider context of Western culture as a whole. He says:

“The high ground has got to be just that it’s one of the world’s great literatures. If you’re ignorant of Aristotle, Hume and Wittgenstein it’s like being ignorant of Shakespeare, Jane Austen or George Eliot and this ought to be regarded as shameful in the same way as ignorance of great literature would be.”

Not many would think of any philosopher’s work being great literature even if it's philosophically great. However, it's often difficult to disentangle the two - especially in the case of a philosopher like Plato. This is also the case if one accepts Jacques Derrida’s idea that there's no difference in kind between philosophy and literature: only a difference in degree. (I suppose this will partly depend on the philosopher we're talking about.)

For example, this would be easy to argue in the case of Plato (again). However, could we really see the work of Rudolf Carnap in the same way? We can also say that just as Shakespeare, Austin and Eliot have shaped the world, so too have Blackburn's philosophical examples – namely, Aristotle, Hume and Wittgenstein. I would add many other philosophers to the list of philosophers who've shaped Western culture: Plato, Aquinas, Descartes, Locke, Kant, Hegel, J.S. Mill and so on. However, I’m not sure if I would regard it as “shameful” if people hadn't read the philosophers on Blackburn’s list. I've never read much Montaigne or Plotinus and I've never read certain other well-known philosophers. (I suspect that Blackburn hasn't either.) However, if one hasn't ready any of these, then perhaps that is shameful and indeed quite remarkable.

“A much more interesting, pragmatic ground is that I really do think that unless people have some tools for reflecting on the language they use they’re apt to be behaving unselfconsciously, and unreflective behaviour is often behaviour that’s at the mercy of forces which we don’t understand. So I think that realising the state of your language is a very important device for realising he state of your culture at this time in history, and in politics.”

For a start, people will soon come to realise how our words and concepts not only reflect world and culture; but also determine or shape them. When we realise that, we can't help but reflect on the words and concepts we use and how we apply them. If we don’t do this, as Blackburn puts it, we'll be “at the mercy of forces which we don’t understand”.

*) All the quotes in this piece are taken from the book, What Philosophers Think. In this book Julian Baggini and Jeremy Stangroom interview various philosophers and scientists.

Posted by Paul Austin Murphy at 19:21