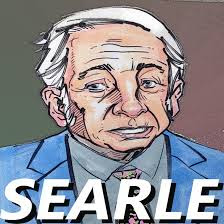 One of the most important and interesting points which Searle makes (in his discussion of consciousness) is that causation needn't be seen in the following terms:

cause followed (in time) by effect

Searle gives an example of a table and its impression on a rug.

We can say here that this isn't a question of the table-pressure-event/state causing the indented-rug-event/state. The weight of the table and the indented rug occur at one and the same time. This is still a casual process; though it's not a case of cause-event/state followed by an effect-event/state. It's a causal process of weight and indentation occurring at one and the same time. Or, as Searle puts it, the gravitational force of the table shouldn't be taken as an event which occurs before the indentation of the rug (which is under it). That is, “gravity is not an event” at all – it's a force or law of nature which is always there. Thus it can't be seen as an event at all.

Searle's next example is about tables and their solidity.

One can see where this line of argument is going.

We can still say that the “lower-level processes in the brain cause my present state of consciousness”. And we can still use the word “cause”. However, we don’t have the following:

Because Searle’s position on causation is so peculiar, it's wise to finish with seeing what another philosopher thinks of it. The philosopher Nick Fotion also says that Searle’s theory

“shows that the biological mechanisms on the lower level of the diagram have their causal effects on the upper level not over a period of time. The emergent changes on the upper level are simultaneous with respect to what happens (vertically) below. Such is not the case when the mind affects the body on any level”.

Posted by Paul Austin Murphy at 22:46