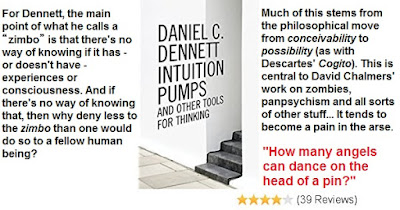 This is a short response to the 'Zombies and Zimboes' chapter of Daniel Dennett's book, Intuition Pumps and Other Tools for Thinking.

If Dennett's zimbo were literally identical - in every respect - to a human being, then how could we say that there's either something less - or something more - to it? And that's because we could - or would - never know that we were actually confronting a zimbo. Though this, of course, is part of the point of the thought experiment: a thought experiment which is itself a response to other philosophers' thought experiments.

Dennett has a big problem with David Chalmers and his (philosophical) zombies. Many other philosophers and laypersons do too.

It all stems from the philosophical move from conceivability to possibility (as with Descartes' Cogito). This is central to David Chalmers work on zombies, panpsychism and all sorts of other stuff. As stated, it tends to become a pain in the arse.

In that respect, the well-known and ironic question

"How many angels can dance on the head of a pin?"


seems to be more acceptable and productive than some of these thought experiments.

Posted by Paul Austin Murphy at 06:07