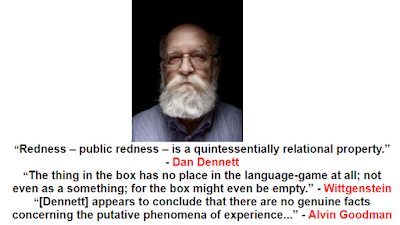 “[Others] note that my 'avoidance of the standard philosophical terminology for discussing such matters' often creates problems for me; philosophers have a hard time figuring out what I am saying and what I am denying. My refusal to play ball with my colleagues is deliberate, of course, since I view the standard philosophical terminology as worse than useless—a major obstacle to progress since it consists of so many errors.” - Daniel Dennett (in 'The Message is: There is No Medium', 1993).

I'm going to start with an ad hominem and say that the real reason why Daniel Dennett is against qualia (or believes that the word qualia is “a philosopher's invention”) is because they're unscientific; not because he thinks that they don't exist (or aren't real).

It can be seen that Dennett's scientific attitude (as only partly exemplified by his position on qualia) was there from the very beginning of his professional career.

Dennett was taught by Gilbert Ryle and the former adopted the latter's position in defining first-person experiences in third-person (or behaviourist) terms.

Take Dennett's oft-quoted list of what he believes other people take qualia to be:

The list above reminds me of David Hume's problem (as quoted by Kant in his Prolegomena to Any Future Metaphysics) with monotheistic definitions of the word God which only include “ontological predicates” (such as “eternity, omnipresence, omnipotence”); none of which are in concreto (i.e., about God-as-a-substance). And qualia too, just like God, are given no “conditions of identity” (to use Quine's phrase): only conditions of attribution (as it were).

Let's give the members of Dennett's list of qualia attributes a quick scientific telling off.

(2) Intrinsic. The word 'intrinsic' isn't often explained or defined; at least not in relation to qualia. But the thought is that if qualia have intrinsic features, then they must also be scientifically irreducible. That is, there are qualities which are intrinsic to qualia and to nothing else. Thus even if there were an attempted reduction of qualia or of a single quale (which some philosophers believe is possible), it would still leave out what makes a “subjective experience what it is” (as Thomas Nagel put it).

(3) Private. The whole of the behaviourist movement (in philosophy and science) had a problem with privacy (as did Wittgenstein). In order to make both psychology and the philosophy of mind scientific, they had to get rid of everything that is private – at least when it came to the mind.

Dennett often lets Wittgenstein put his scientific position for him; which is strange really because Wittgenstein isn't usually cited to back-up what are often called “scientistic” positions.

“The thing in the box has no place in the language-games at all; not even as a something; for the box might even be empty. - No, one can 'divide through' by the thing in the box; it cancels out, whatever it is.”

This can be said to be part of Wittgenstein's behaviourist phase; though, no doubt, many of his acolytes would deny that.

The “language-game” Dennett has in mind is science. However, for Wittgenstein's own argument, it didn't need to be science he had in mind. (In fact he didn't have science in mind.) His argument or position works regardless because it's really an argument against the possibility of a “private language”.

From a scientific position, the mind can indeed be seen as a black box –hence behaviourism and the reluctance to deal with consciousness.

When it comes to qualia the situation is worse because even though beliefs, desires, etc. can be connected to behaviour, the case of qualia isn't quite so clear-cut. After all, qualia may have no behavioural outputs; or, on some accounts, no “functional properties”. To some philosophers qualia may indeed have a functional role. However, the route from qualia to behaviour is so hazy or circuitous that, yes, qualia may as well be erased from the picture entirely. That would be the scientific thing to do.

Wittgenstein's problem with the possible beetle in the box was as strong as Dennett's problem with qualia. Dennett quotes Wittgenstein again saying that the beetle in the box (or qualia) is “something about which nothing can be said”. Dennett's concludes that the word qualia is a “philosopher's term which fosters nothing but confusion, and refers in the end to no properties or features at all”.

Dennett displays his scientific credentials in a rather conventional manner when he deals with colour.

He believes that colour is a scientific property after all. This scientific story, of course, has nothing to do with qualia or “inner experiences”. Basically, Dennett deems colour to be a “relational property”. In his paper, 'Quining Qualia', he writes:

“All but the last of these [redness] are clearly relational or extrinsic properties of the ball. Its redness, however, is an intrinsic property. Except that this is not so. Ever since Boyle and Locke we have known better. Redness – public redness – is a quintessentially relational property.”

Dennett seems to be making a pretty obvious mistake here. He's conflating the effects of a quale (or of a “colour experience”) with the quale itself. Indeed Dennett explicitly says that he's only concerned with “public redness”, not private redness.

What makes the redness of the ball public is its “relational or extrinsic” properties. Thus, in consequence, private redness must be a private property and, therefore, unscientific.

Indeed Dennett is so keen on the public properties of a ball (as opposed to the private ones) that he even champions non-material (or relational) properties.

In the same paragraph as the colour example, Dennett also gives us a scientific account of what he wants from - what used to be called - “secondary properties”. This time he deals with taste instead of colour.

What is it for for an x to be bitter? According to Dennett, it's “to produce a certain effect in the members of the class of normal observers”. Bitterness, then, is also a relational property.

It's not quite clear what “certain effect” Dennett is referring to here. Whatever it is, it must be objective (or intersubjective). Presumably it's objective because it will be behaviourally expressed by “the class of normal observers”.

Do we learn anything about bitterness by such uniform behavioural responses – even if they're examples of uniform “overt behaviour” (such a vocalised statements)? No; we learn about how persons react to bitterness. Uniform reactions to bitterness aren't themselves bitterness. (They are, well, uniform reactions to bitterness.) This is almost equivalent to saying that the throwing a ball is the same as the smashing of a window. That is, the throwing of a ball resulted in the smashing of a window; just as the tasting of something bitter leads to a “certain effect in the members of the class of normal observers”. Basically, Dennett is fusing (or conflating) cause and effect.

In addition to that, it's possible that a seemingly bitter piece of food can have a uniform “certain effect” even if it tastes differently to each person tested. Or, alternatively, something that tastes the same can have different certain effects in the class of normal observers.

Alvin I. Goldman expresses Dennett's scientific position on these possibilities when he says that Dennett's

“claim is that there is no way to distinguish between these competing stories either 'from the inside' (by the observer himself) or 'from the outside', and he appears to conclude that there are no genuine facts concerning the putative phenomena experience [or differences] at all”.

This reiterates Dennett's Wittgensteinian point that there are no facts about the private. And, of course, this is something that has been repeatedly debated in Frank Jackson's What Mary Knew scenario.

Considering Dennett's scientific leanings, it's perhaps not a surprise that he believes that Mary “knew everything about colour”. Dennett believes this because Mary's complete understanding of neuroscience, physics, etc. couldn't fail to supply her with complete knowledge. (Including experiential knowledge?) However, Dennett is wise enough to realise that the full knowledge so often posited for Mary would almost be miraculous in real terms. In fact Mary would need to be (virtually?) omniscient to have it. Thus, by definition, of course Mary would know what red looks like if she were omniscient.

Despite all that, here again one can accept that qualia have no factual status (just as they have no scientific status) at the very same time as accepting that they exist or are real.

It's here, I suppose, that Dennett could ask me the following question:

If qualia have neither scientific nor factual status, then exactly what kind of status do they have?

Well, at a prima facie level, I don't have an immediate answer to that.

Intersubjectivity (or, as it is sometimes called, objectivity) has always been primary in science. And, lo and behold, Dennett says that “no intersubjective comparison of qualia is possible, even with perfect technology”.

That's true; and there are a handful of philosophical arguments which demonstrate that. And since it's taken that qualia don't exist (or may as well not exist) as far as science is concerned, then by definition no intersubjective comparison of qualia is possible and neither would one be accepted.

“Our perceptual experience is always of a more determinate character than our observational concepts which we might use in characterising it.”

Surely this wouldn't as much as make sense to Dennett. It's an analysis of something that's entirely private and indemonstrable.

According to Dennett's logic, could an individual even offer an analysis of one of his own experiences? Some would say: Why not? Though surely Dennett would say: No he couldn't. Or, at the very least, Dennett may say:

Analyse away if you wish. However, it serves no scientific - or any other - purpose.

In that, perhaps he's (partly) right.

Considering Dennett's 'scientism' as regards qualia, you'd think that if scientists accept qualia (at least as described by philosophers), then he'd accept them too. After all, philosophical naturalists believe that what science (not individual scientists!) says goes, goes.

“The sensation of colour cannot be accounted for by the physicist's objective picture of light-waves. Could the physiologist account for it, if he had fuller knowledge than he has of the processes in the retina and the nervous processes set up by them in the optical nerve bundles and in the brain? I do not think so.”

Schrödinger mustn't have believed that even a scientifically omniscient Mary would know what red looks like. Of course it would be moronic to now conclude:

If Erwin Schrödinger believed that qualia exist, then qualia must exist.

Indeed it can even be argued that what Schrödinger says above isn't really a commitment to qualia in the way some philosophers of mind (as well as laypersons) are committed to qualia.

And of course not all scientists accept qualia. Indeed I suspect that the majority of scientists haven't even given the subject of qualia serious thought.

Posted by Paul Austin Murphy at 05:18