Philosophical Questions About the Image of a Black Hole 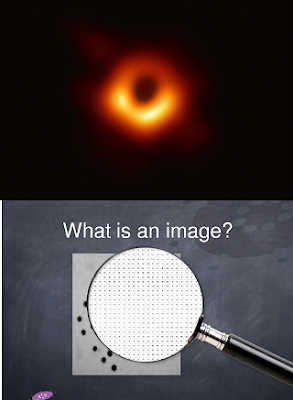 Having said all that, the astronomer Mike Merrifield (of Sixty Symbols and the University of Nottingham) said that this image is the “best [proof] there has ever been for a super-massive black hole”.

Thus how should we “interpret” (to use a word from the philosophy/theory of quantum mechanics) this image?

The Black Hole Itself

The black hole itself is located in a distant galaxy - Messier (M) 87. More precisely, it is 500 million trillion kilometers away. Thus the eight telescopes involved “saw” something from (our) distant past.

In terms of the black hole's size: it is 40 billion kilometers across. Or, to put that another way, it's three million times the size of the Earth and has a mass 6.5 billion times that of our Sun. All in all, this black hole is larger that our entire Solar System.

So, in the context of what's just been said, one can't even imagine how a single person could see (take a photo of) this black hole - or even use a single telescope to view it.

The final image of the black hole was “captured” by the Event Horizon Telescope (EHT). This itself is a network of eight telescopes which are linked together in various places throughout the world.

In terms of the image itself: what we can see is a bright “ring of fire” which surrounds a perfectly circular black hole. This bright ring of fire is itself caused by superheated gas falling into the hole. Indeed this ring is brighter than all the stars in the M87 galaxy put together. That's partly why it could be “seen” through EHT's eight telescopes.

In terms of the colours of the image. The white around the black hole is high-energy light; whereas the red is low-energy light.

Dr Katie Bouman (the scientist largely responsible for the image) has emphasised the fact that what we “see” is actually what's surrounding the black hole.

Bouman also uses the word “image”. She wrote on Facebook:

"Watching in disbelief as the first image I ever made of a black hole was in the process of being reconstructed."

Previous to the publication of this image, Bouman said (during a TED talk) of another image of a black hole that it “isn't a real photograph”: it's “an interpretation of what a black hole might look like”. She also often used the word “picture” in this seminar.

No single telescope would have been powerful enough to capture this black hole. Bouman herself said (if before this particular image was created) that we'd “need a telescope the size of the earth to see a black hole”. Nonetheless, Bouman also said that a “computation” (or algorithmic) solution could be found to this problem. It has been found. She found it. Hence the recent image.

So that's why a network of eight telescopes was set up in locations ranging from Chile to Antarctica. (The project also involved over 200 scientists.) All eight telescopes together used a technique called interferometry. And then all the data from the eight telescopes was stored on hundreds of hard drives. That stored data, in turn, was processed in Bonn and Boston. (Interferometry is a group of techniques in which waves - often electromagnetic waves - are superimposed, causing the phenomenon of interference, which is used to extract information.)

Much as been made of Bouman's series of algorithms which made this image possible. So what, exactly, did these algorithms achieve?

Well, they converted the data from the eight telescopes into the image we can now see. More precisely, Bouman's algorithms “recovered a photo” (Bouman herself repeatedly uses the word “image”) from that huge amount of data.

Interestingly enough, Bouman has previously said that “infinite images” can be taken to represent (if that's the right word) the same physical phenomenon. Thus, in that sense, Bouman and those involved in this project had their own analogue of the “underdetermination of theory by data” thesis. This is the thesis which states that the same physical phenomenon can be accounted for by numerous theories or by numerous models. And, because of that, Bouman has also accepted the possibility of “bias” (her word) when it comes to images of black holes. What she means in this case is that the images extracted from a huge pool of data may be those which coincide with the scientists previous exposure to the “simulations” (another of Bouman's words) of other black holes.

Whatever the case may be, Bouman has said that such images of black holes are “reconstructions” which are “pieced together” in the way that “puzzle pieces” are pieced together.

In technical terms, the colours on the image of a black hole (in this case, black, red, white, etc.) makeup what's called a “false-colour image”. That is, the colours are only approximations of what human eyes would “interpret”. And that's of course to forget that a human eye could never get close to this black hole in the first place. More basically, the black-hole image is a product of radio telescopes which can't capture visible light (unlike an “ordinary” telescope). Hence the term “pseudo colour”.

One may wonder what is meant by the word "image" (as in the phrase “image of a black hole”). This image (as stated) is the end result of the multiple recordings of eight different telescopes. They were somehow fused together (if that's the right way of putting it) in Bonn and Boston.

Having said all that, despite the complexity of the overall project, the multiple images used, the algorithms required, etc., it doesn't necessarily follow from all this that the image presented to the public isn't a faithful representation (or image) of the black hole. Nonetheless, what would it mean for this image to be a faithful representation of this black hole? Indeed, to be pedantically philosophical, what do we mean by “image” or “representation” within the specific context of this black hole?

Let's begin with the term "representation". This term is used in a multitude of ways (e.g., even within the limited domain of the philosophy of mind). However, unlike an image (or picture), representations are sometimes said to also be (mere) "symbols" or things which "take the place of something else".

Posted by Paul Austin Murphy at 23:04