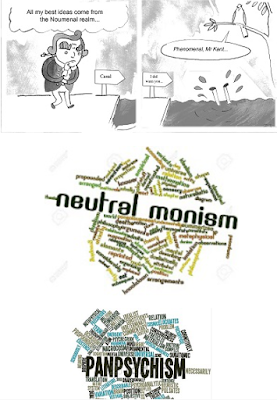 The prime difference between neutral monism and panpsychism is that neutral monism reduces both the physical and the mental to what was often called “neutral stuff”. Panpsychism, on the other hand, argues that experience is basic (or exists “all the way down”). That is, according to panpsychists, experiential properties aren't a causal, physical or temporal consequence of basic neutral stuff: they are there from the very beginning.

Having said that, certain Russellian monists do believe that physical objects (even particles) are what is called “consciousness-involving” (or “proto”?); though it's difficult to work out what that hyphenated term means. Because of that, this may mean that we have both “Russellian panpsychism” and “Russellian panprotopsychism”.

So there's a clash here between seeing this neutral stuff as being neither physical nor mental and seeing as actually having "phenomenal properties". Russellian monists appear (on the surface) to have it both ways; whereas panpsychists don't.

Furthermore, panpsychism doesn't appear to be reductionist. That is, in panpsychism, the experiential isn't reducible to something non-experiential. Neutral monism, on the other hand, posits stuff (or objects) which has absolutely no phenomenal properties at all (despite the aforementioned positions). This goes squarely against panpsychism.

There is of course a possible happy medium between neutral monism and panpsychism: the position that every object (or thing) has both a mental and a physical “aspect” to it - whatever that may mean.

The term “neural” (as in “neural monism”) can be summed up in the following manner. Many other monisms have claimed that “reality” is grounded in either the physical or the mental. However, neutral monism says that this stuff is neutral. That is, nature is neither “intrinsically mental” nor “intrinsically physical”.

Having said that, why is that stuff said to be a neutral? If neutral monism says that “ultimate reality” is neither physical nor mental, then surely it isn't neutral either. However, if neutral monism claims that the ultimate stuff is something in between (or a mix of) the physical and the mental, then that stuff would indeed be neutral (if still only in a manner of speaking).

What is this “neutral stuff” anyway? The problem here is one of characterising what this “one kind of stuff is”. Or indeed saying anything about it. And that's precisely why, for example, Stephen Stich and Ted Warfield said that it's “difficult to develop or understand the nature of the neutral elements”.

So what we often have here is philosophers saying what this neutral stuff isn't, not what it is. In other words, neutral stuff is like a Kantian noumenon – i.e., it's hard to get hold of.

All this may be the case because these questions can't be answered until this neutral stuff is “organised”.

Neutral monists often talk in term of different ways of “organising” the very same “elements” (or “substance”). This hints at a quasi-functionalist approach. Thus in very basic terms:

Put that way, neutral monism is hardly original or controversial. After all, if a set of given atoms are arranged in manner A, we get molecule y. And when the same atoms are arranged in manner B, we get molecule z. We can now move beyond atoms and molecules and think in terms of systems (or simply of different complexes) too. Whichever way a package of “elements” is arranged, it will result is something different. (Interestingly or not, according to mereological universalism, any random group of elements can be put together to create a new object.)

So it isn't a surprise that Bertrand Russell argued that everything begins with “primal stuff”.

Having said that, emergence doesn't seem to be escaped from in either neutral monism or panpsychism.

One argument is this:

If there is experience “all the way down”, then there's no need for (strong) emergence at the level of human mentality or consciousness.


Even if there is experience in every neuron (or in every atom in every neuron), then the overall consciousness of a human person still emerges from the “sum” (or “combination”) of all those “little minds”.

If there's a single thing which complicates the attempt to square Kant's noumena with intrinsic properties it's that some contemporary philosophers believe that we have full access to a single set of “intrinsic properties” – those instantiated in human experience or consciousness. (See later references to Arthur Eddington, Galen Strawson and Philip Goff.)

However, in the most basic sense, Kant's noumena are almost the exact equivalent of the intrinsic properties of contemporary analytic philosophers – at least as they exist/occur in “external” objects, forces, conditions, fields, etc. That is, just as noumena were deemed to exist independently of the human senses or observations, so that's also true of intrinsic properties. Of course there is more to it than that.

Finally, noumena (in the Kantian scheme) are unknowable. It's also clear that intrinsic properties are unknowable and insensible (except in the case of the contents of consciousness – if that's accepted), which is something that many philosophers who accept them are very happy to admit.

I just mentioned the fact that despite noumena being unknowable and insensible, Kant did discuss them in detail. He did so because noumena are “something that is thought [about]”. Similarly, intrinsic properties are also things which can be thought (about). In Kant's own words (from the Critique of Pure Reason):

However, one way in which the current views are not Kantian is that what we observe, etc. aren't seen to be “representations” of intrinsic properties. (Or, if they are, it's hard to see how that would work.)

“landed in the absurd conclusion that there can be appearance without anything that appears”.

What is the nature of this particle (or thing) in and of itself?

This isn't a question which of necessity must have an answer. Or, alternatively, the way this thing behaves, the relations it has, the structure/s it belongs to, etc., may well be all we have. One can therefore say that according to this “relationalist” logic, when the particle (or thing) isn't behaving, interacting, etc., then it isn't a thing/particle at all.

It's of course the case that Ladyman and Ross opt for i) above.

So perhaps we should bite that bullet. In other words, the “thing-in-itself” is like Wittgenstein's “idle wheel in the mechanism”. But that still leaves us with two questions:

This takes us on to “dispositional essentialism”.

Ironically, there is a certain strong sense in which it can be said that most physicists are themselves ontic structural realists (without them, of course, ever using that term or even philosophising about this issue). After all, the mathematical physicists who discuss these issues often say (in a roundabout way) that one can fully describe a particle purely by its behaviour, not by its “inner non-relational nature”. More specifically, if we take electrons, we can say that they are fully characterised in terms of how they can have positive or negative gravitational effects on other particles or in terms of other “behavioural” (or “dispositional”) features.

The physicist Lee Smolin puts similar points (from his Time Reborn) in the following:

“In the Standard Model of Particle Physics... the properties of an electron, such as its mass, which determines how much force is needed to change its motion. In the Standard Model, all the particles' masses arise from their interactions with other particles and are determined primarily by one – the Higgs particle. No longer are there absolutely 'elementary' particles; everything that behaves like a particle is, to some extent, an emergent consequence of a network of interactions.”

To simplify. Particles have no “parts” (as Smolin puts it elsewhere). However, they do indeed have “properties”. These properties are all “relational” (or the product of “interactions”). Mass, for example, is a relational property in that a particle's mass is a product of its interactions with other particles – primarily with the Higgs boson. Consequently, Smolin sees such things in “emergent” terms.

So a particle can be taken to a fundamental part of the world. Mathematical physicists then tell us how this particle behaves (as we've seen) and what structures it belongs to (these structures are themselves partly defined in terms of “relations” and “interactions”).

So that's relationism in physics.

Now we can tie instrinsicalism (rather than relationism) to both mind and panpsychism.

Panpsychists also tell us about a particle's “intrinsic nature”; which is seen as experience, consciousness or “phenomenal properties”.

The philosopher Philip Goff goes further than this. He sets up a very strong link between the minds of human persons and what panpsychists say about particles. Firstly, we have “immediate access” to intrinsic properties in our own case. Thus (according to Galen Strawson) the English astronomer, physicist and mathematician, Arthur Eddington (1882 – 1944), argued that it was “silly” to argue that we have access to “external” matter; though not to the intrinsic properties of our own minds. Indeed Eddington reversed this in the following quote (from his 1928 The Nature of the Physical World) in which he argued for a “mind stuff” which unifies mind and matter:

"We are acquainted with an external world because its fibres run into our own consciousness; it is only our own fibres that we actually know; from these ends we more or less successfully reconstruct the rest, as a palaeontologist reconstructs an extinct monster from its footprint."

“The mind-stuff of the world is, of course, something more general than our individual conscious minds... It is necessary to keep reminding ourselves that all knowledge of our environment from which the world of physics is constructed, has entered in the form of messages transmitted along the nerves to the seat of consciousness... It is difficult for the matter-of-fact physicist to accept the view that the substratum of everything is of mental character. But no one can deny that mind is the first and most direct thing in our experience, and all else is remote inference.”

Believing the contrary also leads to an “explanatory gap” (to use a well-known phrase) between matter and experience. In addition, we also have the huge problem of explaining where experience (or consciousness) comes from in the first place.

“matter has intrinsic properties that both constitute consciousness and serve as categorical bases for the dispositional properties described in physics”.

Yet these intrinsic properties (at least those of neutral monists) seem also to be like (or actually be!) Kantian noumena – that is, both unknown and unknowable. And precisely because of that, many physicists and some philosophers either have no time for them or claim that they don't so much as exist.

Posted by Paul Austin Murphy at 19:49