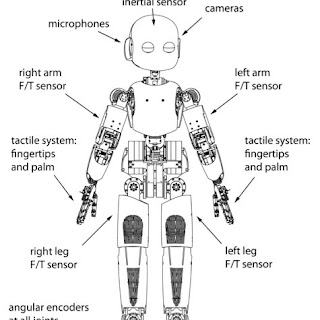 The philosopher John Searle often makes the point that many believers in Artificial Intelligence (AI), computational cognitive science, etc. almost entirely ignore biology. Thus (to Searle) they become contemporary Cartesians in that they make a massive distinction between functions/computations/algorithms/ and what exactly it is that instantiates these things in human beings and other animals – i.e., brains and central nervous systems!

The other thing they play down (or even ignore) is physical embodiment and the myriad interactions with the environment biological creatures experience. So even if a computer becomes embodied in a machine/robot (with arms, legs, “sensory receptors”, etc.), it's still the computations/programme that are doing all the work.

There's more to being embodied that connecting artificial arms, legs, ears, eyes, etc. to a computer or central processing unit (which could be a human being controlling knobs and leavers).

To use the Welsh science journalist (editor-in-chief of the New Scientist) Alun Anderson's words, attaching arms or fingers, ears, etc. to a computer/robot doesn't actually give rise to real “extended tactile experiences”. Basically, to have genuine minds, we need genuine tactile experiences.

In full, this is how Alun Anderson expressed one problem:

“If bodies and their interaction with brains and planning for action in the world are so central to human kinds of mind, where does that leave the chances of creating an intelligent disembodied mind inside a computer? Perhaps the Turing test will be harder than we think.”

The position above can be put simply. We don't simply have brains. What we have is organs with sensory receptors “sending messages” to brains. In terms of “tactile experiences”, those message are more or less immediate. Not only that: they're very responsive to the multitude of extreme particularities of specific environmental or bodily encounters. And then organisms can, at various time-lengths, adapt or change to such specific environmental or bodily encounters.

Of course computers-in-robots can respond to the environment. Though how does that compare to what's just been described? We can accept that it compares to a degree – but to what degree?

As it is, it can be said that robots do already interact with their environments. So what's missing? Do these robots have genuine “tactile experiences”?

What brings about genuine tactile experiences? In the case of human beings and other animals, it's basically biology. Biology is obviously missing from robots. So is biology that important? What is it about human and animal biology that adds something to that link between the environment and the brain/mind that isn't achieved by a computer/person in - or running - a robot?

Anderson ties “extended tactile experiences” to the “understanding of language”. He must believe that computers don't truly understand language (a la John Searle). True, computers physically respond to language as input and then produce output. Though that may not be genuine understanding. (Yes: “What is genuine understanding?”) In Anderson's words, computers “cannot say anything meaningful” even when there are such things as computer languages. (Say, when computers are fed natural-language information and then produce some kind of natural-language output.) As stated, the missing link here, according to Anderson, is “extended tactile experiences”. Computers - and computers embedded in robots - don't have tactile experiences and therefore they don't truly understand languages.

This is a simple (or simply-put) picture. Is Alun Anderson correct?

Posted by Paul Austin Murphy at 03:19