Ladyman and Ross on Quantum-Mechanical Particles: Things, Structure and Relations (4) 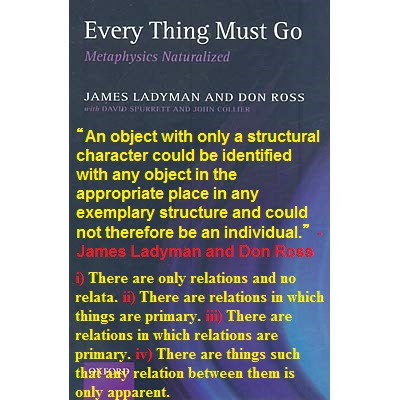 The most important aspect of ontic structural realist position can be expressed in the following way:

Relata (i.e., things/objects/particles/etc.) can be eliminated. Then all we will have left is relations.

James Ladyman and Don Ross ground their own philosophy by expressing Bertrand Russell's position in the following manner:

“... many philosophers have followed Russell in arguing that it is incoherent to suppose there could be individuals which don’t possess any intrinsic properties, but whose individuality is conferred by their relations to other individuals.”

Indeed that passage can be rewritten to make it more germane to Ladyman and Ross's own ontic structural realism. Thus:

It is incoherent to suppose there could be individuals (e.g., particles, etc.) which don’t possess any intrinsic properties, but whose individuality is conferred by their relations to other individuals, structures, fields, states, etc.

Thus we can ask the following question:

Indeed Ladyman and Ross state that Paul Benacerraf believed that

“an object with only a structural character could be identified with any object in the appropriate place in any exemplary structure and could not therefore be an individual”.

The problem with this (or perhaps any) form of structuralism, however, is summed up by Ladyman and Ross who state that “individuals are nothing over and above the nexus of relations in which they stand”. However, they do preface that by saying that this position – only? - applies to “individuals in the context of quantum mechanics”.

Ladyman and Ross continue by saying that “the identity or difference of places in a structure is not to be accounted for by anything other than the structure itself”. Not only that: the mathematical structuralism just discussed “provides evidence for this view”.

Despite all that, Ladyman and Ross often state that they don't actually deny the existence of entities or individuals per se. Yet it's hard to make sense of their claim that “there are objects in our metaphysics” and then go on to state that

“but they have been purged of their intrinsic natures, identity, and individuality, and they are not metaphysically fundamental”.

In other words, if you take away “intrinsic natures, identity, and individuality”, then what's left of things/objects after all that has been taken away? Only structure and/or relations? But what does that mean?

“the relationships among phenomena events, and processes) that pertain to necessity, possibility, potentiality, and probability”.

It can easily be said that structures involve individuals and relations involve relata. At a prima facie level we can also ask:

In what way do “abstractions” involve themselves in modal realities?

Well, mathematics itself involves necessity, possibility and probability. And if structures are inherently mathematical, then structures have modal properties. All that may be true. Though what about modality as applied to the concrete world of objects, events, conditions, states, etc? What about metaphysical modality as understood by philosophers like Saul Kripke, David Lewis, D.M. Armstrong and so on?

Ladyman and Ross also quote the American philosopher of science John Stachel when he says that entities “'inherit [individuality] from the structure of relations in which they are enmeshed'”. However, saying that is a long way from saying that individuals don't exist. Even the very use of the word “inherit” surely means that it must be things which are doing the inheriting.

Now is it that Ladyman and Ross reject this position and simply deny ontological status to things/objects - full stop? Or is their position that entities inherit their individuality from the “structure of relations in which they are enmeshed” as far as they need to go? Thus it's not that Ladyman and Ross are eliminitivists about things/objects. It's simply that they have a radical philosophical take on things/objects. A take which claims that entities gain their individuality from structure. That is, before things/objects are “enmeshed” in structures, they have no intrinsic natures.

This position would go against the claim (for example, of David Lewis) that objects have intrinsic natures regardless of the rest of the world.

So now we still have the following positions:

i) Things gain their natures from the structures they belong to.

Such abstract metaphysics is made concrete when Ladyman and Ross take the example of fermions. They cite the position that

“that fermions are not self-subsistent because they are the individuals that they are only given the relations that obtain among them”.

What's more, “[t]here is nothing to ground their individuality other than the relations into which they enter”. And, according to Ladyman and Ross, even Albert Einstein once claimed that particles don't have their own “being thus”.

As just hinted at, one problem which can be raised about things/objects (as well as about Ladyman and Ross's position) can be expressed by stating two positions:

i) Things/objects have their intrinsic natures independently of the rest of the world.

ii) Things/objects can exist independently of the rest of the world.

This problem specifically arises in the context of “points of spacetime” rather than objects. (Although it may be said that they amount to the same thing.) In this case, Ladyman and Ross use the word “exist” (as in ii) above). This is also a product of two different positions: substantivalism and relationalism. Thus:

i) According to substantivalism, the “points of the spacetime manifold exist independently of the material contents of the universe”.

ii) According to relationalism, “spatio-temporal facts are about the relations between various elements of the material contents of spacetime”.

The idea that “points of the spacetime manifold exist independently of the material contents of the universe” is similar to David Lewis's take (1982) on the intrinsic properties of things. Lewis wrote:

“A thing has its intrinsic properties in virtue of the way that thing itself, and nothing else, is.”

Lewis's position (if not the substantivalist position) can be taken to its most extreme in the following statement:

Ladyman and Ross provide a useful set of four positions which focus on the nature of relations and things. Thus:

At first glance one would take ontic structural realism to endorse (i) or (iii). However, if things are themselves structures (according to Ladyman and Ross), then we must settle for (i) above: “There are only relations and no relata.”

Looking at (i) to (iv) again, couldn't it be said that (ii) and (iii) amount to the same thing? In other words, how can we distinguish

(ii) There are relations in which the things are primary, and their relations are secondary.

(iii) There are relations in which relations are primary, while things are secondary.

Isn't this a difference which doesn't make a difference? One can still ask - in the metaphysical pictures of (ii) and (iii) - the following question:

That's a question of existence. Now what about natures?

One can now ask: