Ludwig Wittgenstein on the Language Games of Religion 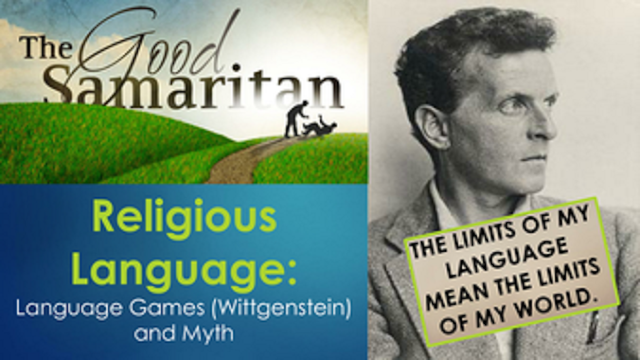 “Observation is crucial for physical-object talk, the authority of sacred texts and holy persons for religious discourse, and the sincere asseveration of the subject for reports of experience. It is a piece of outrageous imperialism to suppose that any single requirement for justification applies across the board.” - William P. Alston, in his ‘Yes, Virginia, There is a Real World’ (1979)

This short piece is largely introductory in nature. It contains very little philosophical commentary or criticism.

Almost from the very beginning of his philosophical life, Ludwig Wittgenstein viewed religion as a “form of life”. He also had a general distaste for theory (whether within or outside religion). He once wrote:

“Christianity is not…a theory…but a description of something that actually takes place in human life.”

This isn't surprising if one bears in mind the influence of Søren Kierkegaard on Wittgenstein. Of course it's been quite well documented that the Danish philosopher had a strong influence on the Wittgenstein of the Tractatus. It's less well documented that there are elements of Kierkegaard’s philosophy that may well have also influenced Wittgenstein’s later work. In respect to languages games only, Kierkegaard believed that people's religions were (in an obvious sense) either in - or actually were – forms of life. These language games (or modes of “being-in-the-world” - Martin Heidegger) were seen by Kierkegaard as coherent and interrelated sets of beliefs which are embodied in various practices. Kierkegaard’s chief criterion for a legitimate language game (a term he never used) - which he believed enabled each language game to identify other language games - is how (or if) it determines “the good life”.

Early on in his career, Wittgenstein also read William James’s popular book, Varieties of Religious Experience. He responded to this book by saying: “This book does me a lot of good.” It could be said that William James was a kind of early language-game theorist. Indeed James was also well known for his idea of “the will to believe”. This doctrine - according to certain commentators at least - states (to put it simply, though accurately) that if a religious belief works for you (or works for a community as a whole), then why not adopt it? It doesn’t matter if one’s beliefs are true (this, of course, begs the question) or whether or not they correspond to anything outside the actual practice. What matters are the pragmatic effects of religious belief. In fact, according to James’s liberal pragmatism (unlike, say, C. S. Peirce’s), a belief is actually made true if and when it works. (I strongly suspect that many experts on James will see this as a simplification of James's position.) So it's easy to conclude that James’s views on religious practice may well have filtered down to the late Wittgenstein.

According to Wittgenstein’s own position on language games, there's a different “substratum” which belongs to each discourse of “enquiring and asserting” (1950). If Wittgenstein believed that this is the case, then it naturally follows that religion, mysticism and art can all equally supply this substratum. Wittgenstein still claimed, however, that within these different “inherited backgrounds” it's still possible to “distinguish between [the] true and [the] false”.

Unlike his Tractarian view on religious language, Wittgenstein’s later language-game position can be captured by the following equally “anthropocentric” passage from Franz Rosenzweig’s The Star of Redemption:

“Real language…is the language of the terrestrial world.” (1924)

So Wittgenstein’s defence of religious language games or forms of life (which, in a sense, was already a part of his Tractarian vision - if less concretely stated there) gave him a new way of defending the “ineffable truths” and experiences of religion and religious persons. However, whereas in the Tractatus it was a question of religious truths and beliefs being beyond science, philosophy and all “factual discourse” (therefore inexpressible or “unsayable”), in his later period Wittgenstein concentrated on the autonomous nature of various religious practices and discourses. This meant that within a religious language game, religious things can indeed be expressed or said.

We can also see a quasi-Wittgensteinian attitude towards religious discourse in the work of the Austrian theologian Martin Buber. He, like late (though not early) Wittgenstein, believed that revelation and even religious knowledge itself is essentially a matter of linguistic/verbal communications and intersubjective contact rather than of (on the model of epistemology and science) a detached observation of some kind of object or event (Buber, 1923).

It's often hard to fathom whether or not religious (as well as other) language games were seen by Wittgenstein to be somehow truly autonomous or also dependent on things outside the game. That is, is it all a question of conventions, rules, rule-following and nothing else?

Perhaps Wittgenstein's so-called “anthropocentric” position on religious language games may be equally seen in the light of Martin Luther’s discovery (as it were) of “justification by faith alone”.

Despite that, it may well be helpful to have a taster of one of the realist (for want of a better word) attacks on Wittgenstein notion of a language game.

The term “realist” is simply used here in the very basic sense of arguing that there must be things outside these langauge games which make the beliefs within them true.

Posted by Paul Austin Murphy at 13:37