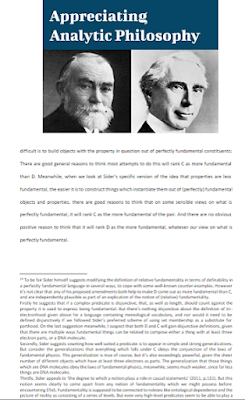 Academics will of course say - and justifiably so - that this style is required for reasons of objectivity (or “intersubjectivity”), clarity, the formal requirements of academic research, stylistic uniformity and whatever. However, there's clearly more to it than that.

One qualification I'll make about that is that the better known (or even famous) analytic philosophers become, the more likely they'll take liberties with that prose style. In parallel, postgraduates and young professional analytic philosophers will take the least liberties with it. (Possibly that's a good thing too.) This basically means that if you've gone through the academic mill and proved your credentials, then you can relax a little in terms of one's prose style. (For example, one can use the word “I” rather than royal “we” - or the “one” I've just used.)

One point I'd like to stress is how the academic style is used to hide the philosophical, subjective and even political biases of the academics concerned. That means if you employ the right self-consciously dry academic style, then very few on the outside will detect any (obvious) biases. Indeed such academics are often seen (by many laypersons) as algorithmic machines devoted to discovering the Truth.

As for the philosophy under the prose.

The Cambridge philosopher Hugh Mellor (D.H. Mellor) once classed Jacques Derrida's work as “trivial” and “willfully obscure”. Mellor did so in his attempt to stop Derrrida receiving an Honorary Degree from the University of Cambridge.  Of course a lot of analytic philosophy is also “trivial”. It's also the case that some analytic philosophers hide that triviality under prose which is “willfully obscure”. Having said that, such analytic philosophy won't of course be trivial or willfully obscure in the same way in which Derrida's work is (that's if it is). That is, it won't be poetic, vague and oracular. Instead, analytic triviality is often hidden within a forest of jargon, schema, symbolic letters, footnotes, references, “backward Es” (to quote Hilary Putnam), words like ceteris paribus and the like. In other words, basic analytic academic prose will be used to hide the trivialities and increase the obscurities. So, again, in Derrida's case it's a different kind of obscurity. (Though, in the continental tradition, it can be equally academic.)

How To Write an Analytic Philosophy Paper

What postgraduates of analytic philosophy tend to do when they write a paper is focus on an extremely narrow “problem”; as well as an extremely-narrow take on that extremely-narrow  problem. Then they'll read everything that's been written on that subject in the last five or ten years (at least by the big or fashionable players). They'll then make notes on - and collect quotes from - what they've read. Thus the resultant paper will also be chockablock with references, footnotes, etc. (though not necessarily chockablock with quotes). It will be written in as academic (or dry) style as possible: indeed, self-consciously so. That will mean that there's often a gratuitous use of symbols, lots of numbered points, schema, and other stylistic gimmicks which sometimes have the end result of making it look like a physics paper.

In crude and simple terms, what often happens is that analytic postgraduates attempt to write like older academics and the contemporary philosophers they've only-just read. Thus, in that sense, they're ingratiating themselves into a professional academic tribe.

Take William G. Lycan’s medium-length paper ‘The Continuity of Levels of Nature’. This paper includes fifty-two references to other philosophers’ texts. We can also cite Jaegwon Kim’s ‘Supervenience as a Philosophical Concept’, which has fifty-one such references.

Then there's the the sad case of footnotes.

Footnotes often make analytic-philosophy papers very difficult to read because they sometimes take up more space (on a given page) than the main text. (Click this link for an example of what I'm talking about.) In addition, if the reader were to read all the footnotes as and when they occur, then he'd loose the “narrative thread” of the central text. (For that reason, aren't notes best placed at the end?) Finally, doesn't this excessive use of long and many footnotes verge on academic exhibitionism?

Postgrad students will also focus on the fashionable/up-to-date issues or problems and read the fashionable/up-to-date papers on those issues or problems - even if such things are simply new stylistic versions of what old philosophers have already said. (Though with endless examples of Derrida's “sign substitutions”: that is, when an old word/concept is given new name.) Indeed it has been said (e.g., by A.J. Ayer way back in the 1950s) that many postgrad students rarely read anything that's older than twenty years old. And many postgrads are so convinced that what is new is always better than what is old that they don't feel at all guilty about their fixation with the very-recent academic past.

So in order to get a grip of why I've used the word “intertextual” (a word first coined by the Bulgarian-French semiotician and psychoanalyst, Julia Kristeva), here's a passage from the French literary theorist and semiotician, Roland Barthes:

“Any text is a new tissue of past citations. Bits of code, formulae, rhythmic models, fragments of social languages, etc. pass into the text and are redistributed within it, for there is always language before and around the text. Intertextuality, the condition of any text whatsoever, cannot, of course, be reduced to a problem of sources or influences; the intertext is a general field of anonymous formulae whose origin can scarcely ever be located; of unconscious or automatic quotations, given without quotation marks.”

On the other hand, many philosophers (or wannabe philosophers) would like to flatter themselves with the view that their own philosophical ideas have somehow occurred ex nihilo. Yet genuine ex nihilo philosophical thought is as unlikely as ex nihilo mental volition or action (i.e., what philosophers call “origination”).

In Praise of Style and Clarity

Bad writing, technicality and sheer pretentiousness, however, shouldn't imply that all work on the difficult minutia of philosophy should be shunned or limited in any way. Of course not. Some papers are bound to be complex and difficult. Not necessarily because of the subject’s difficulty; but simply because the issues and problems will be technical in nature and therefore have a high number of unfamiliar terms. However, often technical terms can be gratuitous – though it depends on the philosopher concerned.

Blackburn makes some other interesting points about philosophical prose – at least in its bad guise. He quotes John Searle stating:

“If you can’t say it clearly you don’t understand it yourself.”

This position is backed up by the science writer, Philip Ball (who writes about scientists, not philosophers):

“When someone explains something in a complicated way, it's often a sign that they don't really understand it. A popular maxim in science used to be that you can't claim to understand your subject until you can explain it to your grandmother.”

(Perhaps this is where Searle got his view from.)

So all the times we think critically of ourselves for not understanding a particular analytic philosopher’s prose, perhaps all along he didn’t understand his own prose. Or, more relevantly, perhaps he didn't understand the philosophical ideas he was trying – badly – to express. Thus we might have assumed our own cognitive limitations or simply the damned complexity of the subject. Nonetheless, perhaps all along it was just a case of the philosopher concerned being a bloody poor writer – regardless of the complexity of his ideas. Either that or he might well have been just plain pretentious!

Certainly such guilty philosophers don’t follow the Quintilian dictum (as quoted by Blackburn):

Of course, literally speaking, if one writes “so that you cannot be misunderstood”, then one must also be writing “so that you can be understood” - the two things go together. Despite that, the philosopher Bernard Williams (also quoted by Blackburn) offered an obvious riposte to this “impossible ideal”:

It's interesting to note here that Williams’ impossible-ideal argument can also be used in favour of the idea that there will always be someone in one’s own culture (or even profession) - no matter how rational - who'll misinterpret at least something you write or say. Indeed perhaps everyone who reads or listens to you will misinterpret you in some small or large way. The idea of a perfect communication of a complete and perfect meaning to a perfect interpreter seems to be a ridiculous ideal. It seems to be almost – or even literally – impossible... and for so many reasons.

So philosophers will always be “misunderstood” by someone in some way. Indeed each person will misunderstand a philosopher in some way - whether that way is large or small. All we have left (as writers or philosophers) is to realise that “it’s [our] job to make it as easy as [we] can”. We can't be expected to do more than this. We can't guarantee the perfect communication of our ideas or the perfect understanding of our ideas by other people (as anyone who uses social media already knows). And even if we allow this slack, perhaps, in the end, it simply doesn't matter that much because communication doesn't require either completely determinate meanings or completely determinate interpretations. We seem to manage quite well in most situations without perfect languages and other philosophical ideals. So perhaps we can't (to use a term from Derrida again) “mathematicise” meaning, interpretation and understanding.