Nancy Cartwright on the Disunity of Science 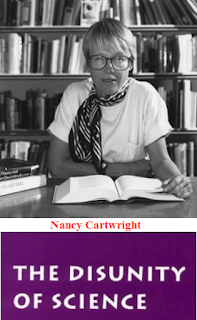 Strongly connected to Nancy Cartwright’s capacity-ascription account of science (or physics), as well as her counterfactual analysis of singular causal claims, is her rejection of the “unity of science” hypothesis as first strongly suggested by Oscar Neuruth. One can see how the disunity of science may follow from Cartwright’s rejection of modal and universal generalisations and the particularity of singular causal claims: She writes:

"Now, it’s not that I know that nature is disunified, but I wouldn’t think it was very sensible to build an entire scientific methodology on an assumption that it must be unified. And if it’s not unified, in certain specific ways, then certain specific methodological assumptions that we make in doing science are mistaken, and they’re going to be costly and lead to mistakes, and I don’t want us to make methodological mistakes based on a kind of Holy Grail metaphysics."

It’s not that Cartwright has proved/demonstrated that nature is disunified either: it’s just that no one has proved – or could prove – that it's unified. That means that it could indeed be disunified. And if it is in fact disunified, then

"certain specific methodological assumptions that we make in doing science are mistaken, and they’re going to be costly and lead to mistakes".

Perhaps it would be better, then, to simply assume the disunification of nature for methodological reasons in that even if we've no conclusive evidence that nature is disunified today, that evidence may well be forthcoming in the future. Indeed wouldn’t it be easier to falsify the unity of science (or nature) hypothesis than to falsify the disunity of science or nature hypothesis? After all, one concrete example of nature’s disunity would falsify the assumption that nature is in fact unified. (Though, in a Quinian response to Karl Popper: holistically, no single observation - or test - can ever falsify a very broad scientific theory.) Whereas no matter how much evidence we may have for nature’s essential unity, it's always possible that some time in the future we'll discover something which basically falsifies the unity of nature (or science) hypothesis.

This too is basically a Humean (not Popperian) point.

Cartwright gives her own reasons why she thinks that scientists (or should I say certain philosophers of science?) feel a strong need for a scientific methodology that's certain, content-less and applicable across the board of all sciences. She writes:

"... and now we move on to the new conclusion that there’s no methodology which is certain and has any meat to it, any real ramifications, other than ‘think carefully’ or something like that, which doesn’t really tell you what to do, how do we ensure that we have objective knowledge?"

It's almost as if – or literally is - the case that scientists (or philosophers of science) view scientific methodologies as logicians view the rules of inference, argument-forms or other forms of deductive validity. That is, just as correct rules of inference secure truth (or just correctness) for the logician, so methodologies (or even a single methodology) will secure science both truth and objectivity - if not also certainty. But this isn't logic and scientific methodologies are never purely logical in nature. Quite simply this is because they have content. Logic is primarily about form. That is, if science is largely about evidence or even truth, then logic is largely about correctness and the forms of logical reasoning or inference. Even the hypothetico-deductive model isn't a case of pure logic being applied to the domain of science. Clearly, the only logical part of the hypothetico-deductive model of science is the deductive part. And even that isn't purely logical in nature because the contingency of the hypotheses used, and from which we deduce scientific theorems, will pass on their contingency (or lack of necessity) to those theorems regardless of the validity of the deductive inferences which are correctly adhered to.

However, it can be doubted that any scientist - and certainly very few philosophers of science - would accept a methodology which simply said “think carefully”, “don’t generalise too hastily” or whatever. What they actually want is something with a lot of “meat to it”. Something which will “ensure that we have objective knowledge”. Of course a philosopher of science like Paul Feyerabend (amongst others) wouldn't even want a scientific methodology which “really [told] you what to do”. Why would anyone scientist (or any one else) want that? It would destroy scientific invention and creativity. And creativity and invention (as scientists themselves tell us) are is essential to much science – and not just to theoretical scientific research.

Cartwright herself gives an example of her anti-methodology approach being taken as an attack on scientific objectivity - or at least a threat to it. In her case it's her scepticism (if that’s the right word) about the use of probability in science. She writes:

"And my attacks, for instance, on being able to use probability as a sure-fire way to infer causes, have come to be seen as an attack on objectivity, though I’m not at all sure that’s right."

In addition, I’m not sure about this example of “backwards causation”. Do we “infer causes” in science at all? Don’t we primarily infer (or predict) effects? Perhaps in science we do both. After all, if we chance upon a blackened and smoking forest, we can infer the cause – that there's been a fire of some kind. Similarly, if we chance upon a forest fire, we can infer (or predict) that the forest will soon be blackened and full of smoke. So causal explanation works both from causes to effects and from effects to causes. Is either one or the other of primary importance in science? Perhaps they both are.

Finally, I’m not even sure how an attack on the fallibility of probability theory is an attack on objectivity in the first place. Is it simply because probability theory doesn't give the scientist certainty? In what way is the word ‘objectivity’ being used here? Without an explanation of what precisely the scientific objectivists (or the objectivist philosophers of science) want with their objectivity, it's hard to make sense of what they say (or what Cartwright) is saying here.