Is Graham Priest's Dialetheism a Logic of Quantum Mechanics? 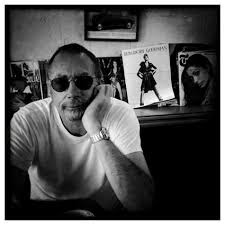 We can now ask if quantum nature affects macro-reality (or, at the least, the "Kantian world" as it's perceived and/or experienced). Perhaps, if dialetheic logic (DL) is truly dependent on the findings of quantum mechanics, we can also ask if dialetheism is applicable to the “classical world” at all. Of course I may be barking up the wrong tree here. That is, why assume the relevance of this macro-/micro-world opposition to dialetheic logic?2

In any case, what has Priest got to say about what he calls “[u]nobservable realms”? (A term which need not only refer to the quantum world; but also to historical events, events beyond our galaxy, numbers/abstract objects, etc.) Take this passage:

“... it would sometimes (in the well-known two-slit experiment) appear to be the case that particles behave in contradictory fashion, going through two distinct slits simultaneously.”

Dialetheic logic would be an ideal logic to describe or capture such a phenomenon. Nonetheless, Priest's clause “it would sometimes... appear” does seem to qualify things a little. In other words, since Einstein, hasn't the supposed “contradictory” (or paradoxical) nature of quantum phenomena - or states - been questioned by various physicists (including David Bohm)? Nonetheless, that may not be relevant anyway.

More broadly, Priest says that “inconsistent theories may have physical importance too”. At first blush, we can ask:


Does inconsistency necessarily have a connection with dialetheism?


And, if so, what's the connection in particular instances? What Priest continues to say may mean that not only is this statement unconnected to dialetheism; it may not be connected to QM either. He continues:

“An inconsistent theory, if the inconsistencies are quarantined, may yet have accurate empirical consequences in some domain. That is, its predictions in some observable realm may be highly accurate.”

Since Priest is talking about an “observable realm”, this mustn't be about QM. (Then again, some of the clues as to the reality of QM are indeed observable.) Not only that: talk of the “accurate empirical consequences” of theories is something that's widely accepted throughout the sciences. Indeed Priest finishes off by saying that “one may take the theory, though false, to be a significant approximation to the truth”.3 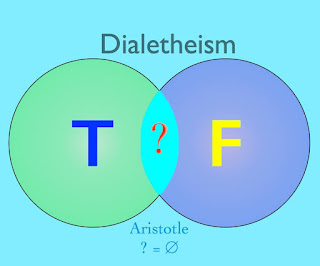 Here's a passage from Priest on an aspect of QM that's relevant – or not! – to dialetheism:

It's difficult to see how this physical phenomenon has any direct relevance to dialetheism. Nothing contradictory/paradoxical is happening here; unlike the two-slit experiment. What's does happen, however, does indeed go against common-sense views of causation. Nonetheless, that doesn't automatically seem to entail contradiction or paradox.

“... suppose that a radioactive atom instantaneously and spontaneously decays. At the instant of decay, is the atom integral or is it not?”

Couldn't the atom be neither integral nor non-integral when it instantaneously and spontaneously decays? (Priest talks of either/or or “one or the other”; not neither/nor.) Or, alternatively, at that point it may not be an atom at all!

This appears to be a temporal problem which must surely incorporate definitions - or philosophical accounts - of the concepts [instantaneously] and [spontaneously].4 Nonetheless, if they define time instants that don't exist (the period from t to t1 doesn't exist), then Priest and others may have a point. However, can an atom - or anything else - “decay” (or do anything) in a “timespan” which doesn't actually exist? How can decay - or anything else - occur if there's no time in which it can occur?...

I mentioned abstract objects in brackets earlier: Priest himself “move[s] away from the empirical realms” to “the realm of sets”. This realm “appears to be inconsistent” too. Here again Priest uses the word “appears”. There are indeed paradoxes in set theory; though haven't logicians and mathematicians - like physicists in QM - attempted to rectify those inconsistencies or paradoxes? True, unsolved, these inconsistencies/paradoxes - again like QM - are perfect specimens to be dealt with - and captured by - DL. Nonetheless, it can be said that what's captured isn't a world or reality of any kind: it's simply an unsolved paradox or inconsistency. In addition, just as we asked about how DL could be applied to the empirical world, so we can also ask what the connection is between the paradoxes of set theory and the empirical world. Despite that, it seems clear that set theory needn't have a necessary connection to such a world; though that will depend on a whole host of factors. (Such as what one's take is on the reality or existence of the members of sets, etc.)

Again, none of this philosophy of science - on Priest's part - is solely applicable to QM or dialetheism. I say “solely” because Priest does indeed give an example from QM. He says that “those who worked on early quantum mechanical models of the atom regarded the Bohr theory [as] certainly inconsistent”. And “yet its empirical predictions were spectacularly successful”.

Again, if dialetheism logic is all about QM, then why not call it a logic of – or a logic applicable to - quantum mechanics? If dialetheic logic is (as it were) justified by the nature of quantum reality, then it may also depend on it. Nonetheless, there's a tradition in logic which states that logic, in a strong sense, doesn't depend on anything – least of all on the nature of the/a world. (Wittgenstein, at one point, stated this position; and the early Russell took the contrary view.) If that were the case, then it may also be the case that dialetheic logic isn't dependent on the nature of QM. It just so happens that QM sometimes – or many times – behaves in a way which can be captured by dialetheic logic. Nonetheless, this doesn't mean that DL is dependent on QM. And it doesn't mean that DL is derived - in any way - from QM either.

Despite saying that, Priest does clarify his position by saying that the


“micro-realm is so different from the macro-realm that there is no reason to suppose that what holds of the second will hold of the first”.


True. Though, again, is dialetheism independent of QM? And, in parallel, is it applicable outside that “micro-world”? Perhaps Priest would reply:


What does it mean to ask if DL is applicable to the macro-world?


Indeed need logic be applicable to the/a world at all?

1 This case parallels - at least to some extent - ontic structural realism, which (it can be argued) is similarly motivated by the reality of QM. Or to put that another way: what relevance does much of the ontic structural realist position have to the macro-world? (See here for my discussion of this subject.)

2 Priest is also inspired by Buddhist logic (or simply by Buddhist thought). So, conceivably, this piece may just as justifiably have been entitled 'Is Graham Priest's Dialetheism a Logic of Buddhism?'

3 This chimes in with Popper's verisimilitude in which scientific theories have quantifiable truth-to-falsity contents.

4 Perhaps, as hinted at earlier, what's needed is some good old-fashioned conceptual analysis of the words “integral”, “non-integral”, “decay”, “spontaneously” and “instantaneously”. Not, of course, the kind of conceptual analysis which historically disappeared up its own backside (i.e., by ignoring science completely). Nonetheless, if quantum reality is the way many physicists say it is, then much conceptual analysis on this matter will either be wrong or simply inapplicable to the quantum domain.

5 What is - or what constitutes - a world anyway?

Priest, Graham. (2002) 'Logicians setting together contradictories: A perspective on relevance, paraconsistency, and dialetheism'.

Posted by Paul Austin Murphy at 05:19