Graham Priest & Martin Heidegger Take Language on Holiday: the Nothing (2) 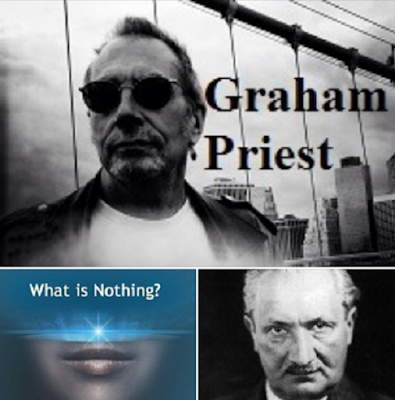 As we've seen, Martin Heidegger was perplexed by the fact that we can refer to nothing. He asked, “What about this nothing?” Heidegger also asked:

“The nothing – what else can it be for science but an outrage and a phantasm?”

Heidegger contended that “[s]cience wants to know nothing of the nothing”.

According to Heidegger (who was critical of science for many other reasons too), science's main sin is that it “tries to express its proper essence it calls upon the nothing for help” (note the words “the nothing”). That is, science refer to (the) nothing (or at least scientists use the word “nothing”), yet it “rejects” nothing. (One wonders why Heidegger singled out science in this respect. After all, all of us use the word “nothing” and refer to nothing.) More specifically:

i) Do we “posit [nothing's] being” when we refer to nothing?
ii) Or do we simply use the word “nothing” because it's useful in certain - and in many - contexts?

What did Heidegger think? This:

“With regard to the nothing, question and answer alike are absurd.”

Graham Priest on Nothing as an Object

Graham Priest too appears to believe (if only when viewed critically) that language creates objects. Actually, he doesn't actually make that rhetorical claim. (The words are mine.) Instead, his actual words can result in this interpretation.

In Priest's own words:

“An object is anything you can refer to with a noun phrase, think about quantify over.”

Indeed this is a positively Meinongian conclusion. (That is, apart from the fact that Alexius Meinong never stressed – and possibly even ignored – language.) However, as Bertrand Russell, Ludwig Wittgenstein, Rudolf Carnap and many others have put it (in their various ways), Priest and Heidegger might well have been “misled by language”.

We must add here that apart from language, Priest also emphasises quantification. However, this amounts to a very similar thing – quantification too brings objects into existence. (Yes, the miraculous powers of the “backward E” – as Hilary Putnam put it.)

Priest refers to quantifying over both everything and nothing. However, he has a position on quantification that's at odds with the common one. Usually it's thought that all acts of quantification have a specific domain in mind. Priest, on the other hand, believes that “it's okay to use a quantifier with the widest possible scope”. That is, it's fine to quantify over literally everything. (Like Russell's universal set?)

Priest offers us a variation on the theme discussed in the history of philosophy (see later) by arguing for the following:

According to Priest, we also refer to (or quantify over) everything – so that too must be an object. Yes, Priest says that “everything is an object”, just like nothing. (It's then that Priest gets all dialeithic by saying that “it's not an object” too. But we'll leave that until later.) That is, Priest applies the same logic to everything as he does to nothing. The following words will make that clear:

Philosophers too have referred to nothing, and hence it must be an object. Priest himself refers to Ludwig Wittgenstein and Nagarjuna. He says that these two thinkers

“tell[] you that something is ineffable; and then [they] explain why it's ineffable - thereby talking about”.

That is certainly the case with the Tractatus, in which Wittgenstein discusses the “form of the world”. We also had Kant's endless references to noumena; that's even though he believed that nothing could be known about them. Then again, all this is also true of the round square or the brick with a sense of humour - which I've just referred to!

To repeat. Priest goes all linguistic (not all ontological – which doesn't mean there's an absolute distinction) when he says that “'nothing’, can also be a noun phrase”. Basically, that's because we can and do talk about it. Or, more specifically, Hegel and Heidegger talked about it. That is, “[w]e may say that Hegel and Heidegger both wrote about nothing”.

Moreover, “nothing” is “not [always] a quantifier phrase”. That is, it's not all about counting or quantifying. It's also about a thing – an object.

One other way in which we can talk about nothing is to note that “[w]e can say that [Hegel and Heidegger] said different things about it”. In addition, Christianity talks about nothing in that the “Abrahamic God is supposed to have created the world” out of nothing.

We can see that Priest is fully committed to Plato's Beard in that human sayings bring things into existence.

So now let's do some history of philosophy.

Bertrand Russell - in his 1918 paper 'Existence and Description' - believed that in order for names to be names, they must name – or refer to - things which exist. Take this remarkable passage:

“The fact that you can discuss the proposition 'God exists' is a proof that 'God', as used in that proposition, is a description not a name. If 'God' were a name, no question as to existence could arise.”

That, clearly, is fairly similar to Parmenides's own position on the use of the word “nothing”. Russell's argument, however, is very different.

(Personally, I don't have much time for Russell's argument. It seems to have the character of a stipulation [That is, names must name existing things.]. It's primary purpose is logical and philosophical. Russell, at the time, was reacting to the “ontological slums” - as Quine put it - of Alexius Meinong. However, this semantic philosophy simply seems like a stipulation - or a normative position - designed to solve various philosophical problems.)

As for Quine, he had no problem with the naming of nonbeings or non-existents (though non-being and non-existence aren't the same thing). In his 1948 paper, 'On What There Is', he firstly dismisses Russell's position. Quine, however, puts Russell's position in the mouth of McX and uses the word “Pegasus” rather than the word “God”.

“He confused the alleged named object Pegasus with the meaning of the word 'Pegasus', therefore concluding that Pegasus must be in order that the word have meaning.”

Parmenides made a similar mistake.

The ancient Greek philosopher didn't think that a name could have a meaning without the thing being named also existing or (having) being. However, we can speak of a something ( an x) that doesn't exist because the naming of such an x doesn't entail or even imply its existence. Though - in homage to Meinong (as well as, perhaps, to the philosopher David Lewis) – philosophers can now ask us the following question:

“What kind of being” does the named object (or thing) have?

If we return to Russell. His theory is an attempt to solve that problem by arguing that if a named x doesn't exist (or have being), then that name must be a “disguised description”. (In the case of the name “Pegasus”, the description would be “the fictional horse which has such and such characteristics”.)

1) Some of the quoted words and passages from Graham Priest in the above are taken from the 'Everything and Nothing' seminar – a Robert Curtius Lecture of Excellence at Bonn University - which Priest gave. I relied on both the transcript and the video itself. However, I've edited a lot of what Priest says in that seminar to make it more comprehensible. For example, I removed many of the uses of the word “so”, added full stops, commas and suchlike. Hopefully, the philosophical content is kept intact. None of this applicable to the words and passages I quote which come from Priest's papers and books.

Posted by Paul Austin Murphy at 21:38