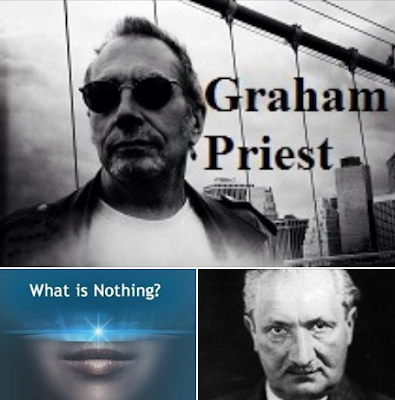 i) Nothing Both is and is Not an Object
ii) Ontologically Dependent on Nothing
iii) Possible Worlds and Dialetheism
iv) Is Dialetheism About Reality?
iv) Quantum Mechanics

One can stress the ontological nature of his dialetheism in that it has been claimed that isn't a formal logic. Instead, it's argued to be "a thesis about truth". Thus it's no surprise that Graham Priest ties it to nothing and therefore to ontology.

Nothing Both is and is Not an Object

Graham Priest hints at dialetheism in this passage:

“Nothing is not an object because you've taken away all objects to get it.”

Elsewhere, Priest says that nothing is an object. Thus nothing “both is and is not” an object. Hence the dialetheism.

So despite the work of Russell, Quine, Carnap, etc., Priest comes out with phrases such as

“we posit nothingness in advance as something that is such-and-such we posit it as a being a thing”.

No; we don't “posit” anything ontological when we use the word “nothing”. Some philosophers (very few) have done so; although “we”, generally, haven't.

Priest then offers us the contradiction.

Priest poetically calls this “going from nothingness to nothingness”.

Then we get back to the other dialetheic horn – nothing is not an object. That is:

Or in Priest's own words:

“[N]othing depends on itself. Though since it's not an object, it doesn't depend on itself.”

Here again we have a contradiction.

Or so the argument goes.

“nothing [] depends on itself; but since it's not an object, it doesn't depend on itself”.

(Readers will need to backtrack to the section on objects in order to see exactly why Priest believes that nothingness can be seen as an object.)

Here's some more dialetheism from Priest. He says:

“Since [nothing] is an object, it is something. But it is the absence of all things too; so nothing is nothing. It is no thing, no object. Here, Heidegger got it exactly right: What is the nothing?”

Then, in a note, Priest is more dialetheically explicit when he states the following:

So Priest appears to be magicking dialetheisms (as it were) out of the air. Actually, he doesn't accept that all the contradictions he mentions (in various places) are real contradictions (i.e., he denies that logical “explosion” also applies to dialetheism).

For example, Priest rejects the posited contradiction found in Wittgenstein's Tractatus idea that the “form of the world” is ineffable. Why? Basically, because we can both speak about - and describe - it. On the other hand, Priest does seem to accept that “the ground of reality [] embodies another contradiction” because nothingness “both grounds itself and doesn't ground itself” and “it is and isn't an object”. There nothingness is “the contradictory ground of reality”.

Ontologically Dependent on Nothing

Priest then makes this massive claim:

Firstly, why is nothing a “ground”? Indeed what is it for “nothing to be the ground of reality”? And where, exactly, is the “contradiction”?

No wonder Priest then says that this “is good old-fashioned metaphysics”. (It is!) And it's no surprise, either, that Priest also ask: “What to make of the contradictory ground of reality?” And he concludes:

So why theologians and not philosophers?

“It might be thought that the fact that ¬(A ∧ ¬A) holds at a world entails that one or other A and ¬A fails; but this does not necessarily follow.”

Is Priest saying that ¬(A ∧ ¬A) holds at the actual world (i.e., our world); though not “necessarily” at all possible worlds? Or does Priest believe that only at other possible worlds A ∧ ¬A holds? In any case, the dialetheic position is that A ∧ ¬A is not necessarily false.

Priest offers us the following symbolisation of his position:

So what about Priest's A ∧ ¬A?

According to Priest, “it is possible for A to be both true and false at a world”. That is, of course, the dialetheic position. Yet does this position require possible-worlds theory when Priest (elsewhere) has said that it's also applicable at our world – the actual world?

Not surprisingly, Priest concedes that

“it is natural to ask whether there really are possible worlds at which something may be both true and false”.

He also believes that this is a “fair question”. Nonetheless, Priest also argues that

That seems to follow from the earlier possible-worlds logic. We can now argue the following:

i) If it's possible for A ∧ ¬A to be true at at least one possible world,
ii) then it's also likely to be - or possibly - true at our actual world.

Is Dialetheism About Reality?

In order to tackle Priest's later dialetheic views on quantum mechanics (see the next section), let's firstly take the words of Bryson Brown as an introduction.

Bryson Brown (in his paper 'On Paraconsistency') stresses “the world”, rather than words. That is, he's stresses ontology, not semantics.

More specifically, Bryson stresses the importance of inconsistency for dialetheism. He also says that dialetheists are “radical paraconsistentists”. He writes:

“[Dialetheists] hold that the world is inconsistent, and aim at a general logic that goes beyond all the consistency constraints of classical logic.”

Deriving the notion of an inconsistent world (or a world which contains contradictions) from our psychological and/or epistemological limitations (as well as from accepted notions in the philosophy of science and mathematics) is problematic. In other words, the epistemological position that we have inconsistent (or even contradictory) positions/systems can't also be applied to the world itself.

Another way to put this is in terms of set-theoretic paradoxes, as also mentioned by Bryson Brown.

Brown says that “the dialetheists take paradoxes such as the liar and the paradoxes of naïve set theory at face value”. That is, it may be the case that dialetheists choose - for logical and/or philosophical reasons - to accept paradoxes even though they also believe that, ultimately, they aren't true of the actual world. Then again, Brown continues by saying that dialetheists “view these paradoxes as proofs that certain inconsistencies are true”. Thus:

These inconsistencies are true of what?
True only of the paradoxes (in themselves, as it were)?
Or true of the world itself?

Again, this stress on the world may betray a naïve, crude and, perhaps, an old-fashioned view of logic. Nonetheless, Priest himself does mention “reality” on a few occasions. When discussing the virtue of simplicity, for example, he asks the following question:

“If there is some reason for supposing that reality is, quite generally, very consistent – say some sort of transcendental argument – then inconsistency is clearly a negative criterion. If not, then perhaps not.”

This again concerns reality. As it is, it's difficult to see how the world can be either inconsistent or consistent. This position is similar – or parallel – to Baruch Spinoza's philosophical point that the world can only, well, be. (Graham Priest is a Buddhist.) Thus:

“I would warn you that I do not attribute to nature either beauty or deformity, order or confusion. Only in relation to our imagination can things be called beautiful or ugly, well-ordered or confused.”

“those who worked on early quantum mechanical models of the atom regarded the [Neils] Bohr theory [as] certainly inconsistent”.

Priest then tells us:

Priest appears to be hinting at the following:

Here's a passage from Priest on an aspect of quantum mechanics that he sees as being relevant to dialetheism:

“[S]uppose that a radioactive atom instantaneously and spontaneously decays. At the instant of decay, is the atom integral or is it not?”

Couldn't the atom be neither integral nor non-integral when it instantaneously and spontaneously decays? (Priest talks of either/or and “one or the other”; not neither/nor.) Or, alternatively, at time t, x may not be an atom at all!

So what of Priest's own (logical) conclusion when it comes to atomic decay? He claims that the aforementioned atom “at the point of decay is both integral and non-integral”. This isn't allowed – Priest says - if the law of excluded middle has its way. After all, the law of excluded middle tells us that the the atom must either be integral or nonintegral; not “both integral and non-integral”.

1) Some of the quoted words and passages from Graham Priest in the above are taken from the 'Everything and Nothing' seminar – a Robert Curtius Lecture of Excellence at Bonn University - which Priest gave. I relied on both the transcript and the video itself. However, I've edited a lot of what Priest says in that seminar to make it more comprehensible. For example, I removed many of the uses of the word “so”, added full stops, commas and suchlike. Hopefully, the philosophical content is kept intact. None of this applicable to the words and passages I quote which come from Priest's papers.

Posted by Paul Austin Murphy at 09:51