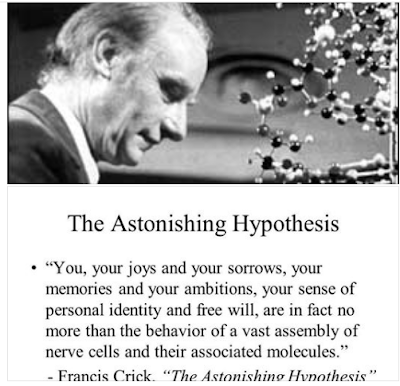 i) Introduction
ii) Only Dependent on the Brain?
iii) Where in the Brain is an Ambition?
iv) Conclusion


In Francis Crick's 1994 book, The Astonishing Hypothesis: The Scientific Search for the Soul, he wrote the following oft-quoted passage:

“'You', your joys and your sorrows, your memories and your ambitions, your sense of personal identity and free will, are in fact no more than the behavior of a vast assembly of nerve cells and their associated molecules.”

It's easy to believe that Francis Crick was being willfully provocative and rhetorical here. At the same time, he may also have been telling the truth – if only to a degree (as shall hopefully be shown).

In terms of the rhetoric and provocation, it's true that Crick's critical attitude towards religion was one motivation for writing The Astonishing Hypothesis. So, to put it in non-rhetorical terms, Crick certainly did believe that religions can be wrong about scientific issues (as do many religious people). He also claimed that it is science's job to rectify the false claims of these religions. (Or at least those claims which appear to have a scientific subject.)

Crick was also well aware that when he began studying consciousness he was tackling a subject which traditionally had been the sole property of religion and philosophy.

Another point that can be made about Crick's rhetoric and provocation is that he was simply attempting to get a point across. And the best and simplest way of doing that is to be poetic and rhetorical. After all, strongly-expressed views often attract a large audience. Nonetheless, the extremity of a view doesn't automatically mean that it's false  - at least not in every respect. Thus perhaps Crick enticed people in and then gave them a broader and more nuanced perspective on his extreme words (i.e., those quoted above). Though it's of course possible that this is to give Francis Crick the benefit of the doubt.

Despite the opening quote, Crick does express the same idea in a slightly less provocative (i.e., more technical) way. That is, he also wrote:

"A person's mental activities are entirely due to the behavior of nerve cells, glial cells, and the atoms, ions, and molecules that make them up and influence them.”

So is that any better?

As already hinted at, the prefix “seemingly” (as in “seemingly extreme”) is used because what Francis Crick says isn't really extreme at all. It's partly true (if, as stated, in a limited way) – at least in becomes truer when the rhetoric is stripped away and the position is both defended and criticised.

In addition, the very fact that Francis Crick decided to study consciousness in the first place may – or does – suggest that he couldn't have been a reductionist in any strict (or traditional) sense. After all, in much psychology, neuroscience/neurobiology and sometimes even in philosophy, consciousness had been reduced to brain/behavior or simply ignored. Then again, most of The Astonishing Hypothesis is about neurobiology. Thus, even though the opening quotation is in essence a philosophical position, the philosophical defence and implications of that passage are rarely fully developed in the book itself.

Only Dependent on the Brain?

Let's put the central position in this very simple way.

If it weren't for the brain (or if it weren't for the “nerve cells” mentioned by Francis Crick), then it's indeed the case that we wouldn't have (to use Crick's own words) “memories, ambitions, personal identity, free will, sorrows”. All these things do depend on the brain. Isn't that blatantly obvious to most (though, of course, not all) people?

Now does it follow from this that joys, sorrows, memories, ambitions, personal identity and free will (taken individually) are identical to a group of neurons, a part of the brain, or even the entire brain taken “holistically”? Not really.

Indeed how can one thing actually be another thing? Or in terms of Leibniz's Law:

If x and y are identical, then everything true of x must also be true of y.

Is a group of neurons identical to your memory (to take just one example) of a cat drowning in a river in 2010? In Leibnizian terms again:

i) If your memory of a cat drowning in 2010 is identical to neuron set x (which is its “subvenience base”),
ii) then everything true of that memory (taken as a mental phenomenon) is also true of neuron set x.

Yet surely that can't be the case.

It is true that the memory (as a mental event/state) itself is about a cat's death in a river. Is neuron set x also about a cat drowning in a river? The memory itself relates to something which occurred in 2010. Does neuron set x also relate to an event in 2010 - at least in the same way as the (mental) memory does? Inversely, brain part x is grey-pink, fleshy and three-dimensional. Is the memory of a dying cat also grey-pink, fleshy and three-dimensional? And so on.

To repeat: although the memory is indeed dependent on a part of the brain, it can't be identical to it. To paraphrase Leibniz again:

There are things true of the memory of a dying cat that aren't true of the part of the brain which is its material subvenience base. (Let's ignore “externalist” or “broad content” arguments for now.)

One other such truth is the subvenience base of the memory is material – it's made out of neurons, glial cells, atoms, axons, dendrites, molecules, myelin, charged particles, electrical currents, neurotransmitters, etc. Surely the mental memory of a dying cat isn't made out of any of these things.

The Francis Crick quote is problematic in another way too.

Crick seems to be referring exclusively to the brain or to its “nerves cells”. However, joys, sorrows, memories, ambitions, personal identity, etc. also have physiological or bodily aspects which go beyond the brain. Being sorrowful, for example, can make you physically lethargic and even ill. It's true that these physiological or bodily effects are also related to the brain and therefore to Crick's nerve cells. However, like memories, etc., they aren't identical to them. Then again, there are nerve cells (e.g., motor, sensory and autonomic) throughout the body. That is, when you're tired (in the sense that your body becomes weaker, you become sleepy, etc.), even these physiological events/conditions outside the brain are related to neurons in the brain. (Such nerve cells outside the brain are sometimes classed as “projections of neurons”.) Then again, it's still the case that not all nerve cells are neurons.

Where in the Brain is an Ambition?

In the case of certain other examples cited by Francis Crick, it's hard to even conceive of what he means.

Let's use Mr X's ambition to want to rule the universe as an example.

Could that really be fully accounted for by the brain alone (or by a set of neurons)? If it were, then perhaps a neuroscientist could look at that set of neurons and literally either see the ambition or get to knows its content in some other way.

However, let's say that in principle an ambition (or another psychological attitude) is caused/brought about/etc. by a particular part of the brain which can be fully and successfully observed and investigated by magnetic resonance imaging (MRI), elctroencephalography (EEG), or by positron emission tomography (i.e., a “PET scan”). The neuroscientist still wouldn't observe - or get to know the content of - Mr X's ambition to want to rule the world. The only way he could know about the Mr X's ambition would be to ask him.

And even if a precise correlation between this ambition and a part of the brain existed, the neuroscientist would still need to question Mr X about it.

(It's a little like the difference between the cause of a fire and the fire itself. A struck match was a necessary - though not sufficient - cause of a particular forest fire. However, the striking of the match  - or the lit match itself - and the forest fire were very different things.)

Again, the brain's parts are necessary for memories, sorrows, etc; though they aren't identical to - or sufficient for - them. That means that Crick's phrase “are in fact no more” is (strictly speaking) false.

Nonetheless, none of this extra detail (as it were) needs be non-natural, non-physical or “spiritual” in nature. That extra something will include mental states/events, other parts of the body (as well as bodily physiology), the external environment, personal and communal history, language, culture and many other things – all of which are indeed either physical/natural or abstractions from the physical/natural.

Posted by Paul Austin Murphy at 05:50