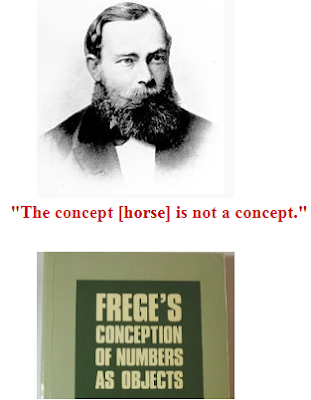 Firstly, let’s think in terms of predication – that most basic of logical procedures and an important element of nearly all traditional ontology.

Rihanna is one and Radiohead is three.

In terms of ontology, Gottlob Frege didn't think that numbers are properties of objects (i.e., objects like Rihanna and Radiohead). That is, we can't predicate “unity” or “oneness” of Rihanna in the way we can predicate “sexiness” of her. In terms of its grammatical form, that's mainly because the sentence above is a conjunctive identity statement. That is:

Rihanna and Beyoncé are one.

That is, the proper names have the same reference – viz., the number 1.

Frege (after Kant) argues that this argument is also true of the predicate “exist” (or “exists”). This too can't be a predicate (or property) of a concrete object. We can say:

However, we "really mean" (or we must mean):

The concept [man] is instantiated.

In other words, the concept [man] has at least one instance. (Or, alternatively, there is at least one instance of the concept [man].) So if the predicate “exists” can only be applied to concepts (not to objects), then we can say that "existence" is “a predicate of predicates”. That is, a predicate of concepts, not of objects. We can also say that the predicate “exists” is a meta-predicate (or a meta-concept); which, unlike lower-order predicates, only applies to concepts. (Just as a meta-truths apply to truths about facts/observations/etc., but which aren't themselves about facts/observations/etc. - they're only linguistic expressions.)

What about this statement? –

There are four politicians.

The Fregean “logical form” of that perfectly grammatical expression is:

Does it now follow that in 4 isn't really a concept at all: it's a logical abstract object? Frege himself famously writes:

The concept [horse] is not a concept.

That seemingly paradoxical statement can be explained in the sense that in certain statements (including the one above) the concept itself is predicated, not the extension of the predicate (or concept). If that’s the case, it becomes the subject-term of the statement. Consequently, it must therefore be an object, not a concept (or a predicate). Hence the prima facie paradoxical nature of Frege’s statement about the concept [horse].

We can now say:

The number 4 is (as it were) turned into an object: i.e., a non-spatiotemporal abstract object. Can we do the same with the predicate expression “exists”? That is, can we write the following? –

The concept [exists] is not a concept.

Is the “property” existence really an actual object – a thing of some kind? I don’t think that Frege did think of existence in the same way as he thought of a number. However, all the Fregean arguments seem equally applicable to the predicate expression “exists”; not just to the “four” in “There are four politicians’. And if Frege did think that existence isn't a genuine object like the number 4, then how did he argue for such a distinction?

Posted by Paul Austin Murphy at 05:15