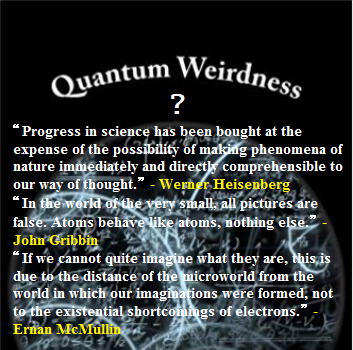 The use of the words “deflating quantum mechanics” isn't meant in the sense of offering any challenge to quantum mechanics (QM) itself. Of course not. For a start, I'm not a physicist. (One would need to be a great physicist to challenge the fundamentals of quantum theory.) This piece, instead, is primarily aimed at the interpretations of QM by the layperson and indeed even by some physicists. In other words, quantum theory is fine by me. What I do have a problem with is commentators deliberately attempting to make QM even more (as it's often put) “weird” than it actually is. In addition, there's also of the problem of people focusing entirely on quantum weirdness.

More relevantly, it's argued that this quantum weirdness is largely brought about when people use images, pictures or analogies which are only applicable to the everyday world, and then applying them to the quantum realm. This - almost by definition - must surely be like pushing square shapes into round holes. In other words, it's bound to make QM weird/er.

It would seem that one of the main positions advanced in this piece is partly contradicted by a well-known quote from Albert Einstein. Namely:

“If I can't picture it, I can't understand it.”

So despite Einstein's words, it can also be said:

If you can picture the phenomena of quantum mechanics, then you don't understand them.

Werner Heisenberg, for example, argued that all the imagistic or analogical descriptions of QM are problematic. More precisely, he stated the following:

“Progress in science has been bought at the expense of the possibility of making phenomena of nature immediately and directly comprehensible to our way of thought.”

In other words, in order to make the scientific


“phenomena of nature immediately and directly comprehensible to our way of thought”,


scientists have relied on images, pictures and analogies which simply don't do the (complete) job. On the other hand, when scientists don't use such analogies, pictures or images, then QM is incomprehensible to “our way of thought”.

There's a deep problem here - at least for laypersons!

So what if it's partly the overuse of imagery and analogies which makes QM seem so weird? Sure, QM is indeed weird. Nonetheless, using images, picture and analogies which are applicable to the macro-scale (then applying them to the micro-scale) can't help but make things weirder. On the other hand, without imagery and the requisite mathematics, how does any layperson or even physicist know that QM is weird at all?

It's not only laypersons who have problems with “picturing” the phenomena of QM - physicists do too. And since the failures (or limits) of the imagination have just been been stressed, here's the philosopher Ernan McMullin stating the following:

“If we cannot quite imagine what they are, this is due to the distance of the microworld from the world in which our imaginations were formed, not to the existential shortcomings of electrons...”

Perhaps part of this problem is that the wave description isn't very apt in the first place. That is, waves at the subatomic level aren't like waves in the sea, in your bath or even like waves at all. (The graphic representations of the “peaks and troughs” of the interference pattern, for example, may not help.) This is why Erwin Schrodinger, for one, decided to call them “wave functions” instead of "waves". In other words, the wave description (even if only analogical) was never satisfactory to Schrodinger and indeed to many other physicists.

So what about particles?

“construed to have features which make it appropriate to think of them as a system of waves”.

Yet, on the other hand, electrons “also have traits which lead us to think of them as particles”.

Since waves and particles have just been discussed, it's worth noting here what the astrophysicist and writer John Gribbin has to say on this. Gribbin ostensibly takes an extreme position on this part-rejection of analogies, images and pictures. He writes:

“In the world of the very small, where particle and wave aspects of reality are equally significant, things do not behave in any way that we can understand from our experience of the everyday world...all pictures are false, and there is no physical analogy we can make to understand what goes on inside atoms. Atoms behave like atoms, nothing else.”

“all pictures are false, and there is no physical analogy we can make to understand what goes on inside atoms”,

In fact we can even say that the very use of the words “particle” and “wave” may mean that Gribbin himself is using pictures or images and/or being analogical. That is, if “in the world of the very small” it's the case that

“things do not behave in any way that we can understand from our experience of the everyday world”,

then why is Gribbin using the words “particle” and “wave” in the first place?

It's not only QM that's the problem here.

According to Freeman Dyson (who was talking about a “new theory [of] black holes”), the problem was that Stephen Hawking (at least at that point) was “still groping in the dark for concepts which will make his theory [of black holes] fully intelligible”.

All this depends on what Dyson meant by “concepts”. After all, he might have only been referring to mathematical concepts. In fact Dyson continued by saying that

“[a]s usual when a profoundly original theory is born, the equations come first and a clear understanding of their physical meaning comes later”.

This shouldn't be a surprise because mathematics itself is an abstract realm and numbers and equations (not their written symbols, etc.) are said (at least by some philosophers and physicists) to be “abstract objects”. Thus the equations Dyson referred to only became (as it were) concrete when given a “physical meaning” or when applied (in this case) to black holes.

So here we have a disjunction between mathematics and reality/nature that's only brought together when the mathematics is given a physical meaning or when applied to reality. However, even then it can be said that the disjunction still exists in a strong way. This means that whereas many scientists stress the unity of maths and physical reality, the opposite (as with string theory!) can also be stressed.

So we can still ask this question:

Was it to himself and Stephen Hawking? To other physicists generally? Or to laypersons?

Richard Feynman once wrote (when talking about an electron taking “many paths” at the same time) the following:

“[Quantum mechanics] describes nature as absurd from the point of view of common sense. And it fully agrees with experiment. So I hope you can accept nature as She is – absurd.”

Feynman himself singled one such scale: the scale of the atom. He said that

We also have this from the nuclear physicist Kenneth W. Ford:

“For example, to picture the nucleus, whose size is about 10-4 to 10-5 of the size of the atom, one may imagine the atom expanded to, say, 10,000 feet or nearly two miles... A golf ball in the middle of New York International Airport is about as lonely as the proton at the center of the hydrogen atom.”

Even if extra dimensions do exist, they may still be (or are) incredibly small; as well as “compacted”. Thus the very idea of extra dimensions bears little relation to those portrayed in horror and science-fiction films. Indeed, way back in 1926, the extra dimension suggested by Oskar Klein was thought be curled up and too small to be detectable. Thus only something equally small could (as it were) live in this extra dimension.

And strings themselves are fantastically smaller than protons, neutrons and electrons. Let Freeman Dyson explain by going even further with superstrings:

In any case, things at different scales (or things of different types) display remarkably different kinds of behaviour.

Take fleas, which can jump 100 times their own height. Take the bacteria that survive below freezing point. And on the moon, astronauts can float. However, these examples are still in a different logical space to the things which occur at the quantum scale. At the QM scale, some things are deemed to be "paradoxical" and even "logically contradictory". Nothing a flea or astronaut does can be described that way.

So when we're talking about the subatomic scale, things are almost bound to be fundamentally different. And when we get down to the scales tackled by string theory, then you'd hardly expect the kind of things you experience in your local pub.

There's a big problem with this emphasis on the importance of scales when it comes to QM. This means that it will need to be said why it is that these scales (i.e., the micro and macro scales) should make such a profound difference to things.

Nonetheless, this very-neat division also needs to be explained: it has been rejected.

This position seems to back up a point Roger Penrose has made about how different levels of description (which, he argues, are brought about by the effect of “measurement” or observation) determine Greene's “line in the sand” between the quantum realm and the “classical” realm. In Penrose's own words:

“Since randomness comes in, quantum theory is called probabilistic. But randomness only comes in when you go from the quantum to the classical level. If you stay down at the quantum level, there's no randomness. It's only when you magnify something up, and you do what people call 'make a measurement'. This consists of taking a small-scale quantum effect and magnifying it out to a level where you can see it. It's only in that process of magnification that probabilities come in.”

Thus Penrose particularly notes how randomness is a consequence of observing quantum phenomena at the “classical level”. Nonetheless, this can still be deemed to be an epistemic problem, rather than an ontological one. That is, the probabilities (or randomness) arise not from the ontology of the quantum world, but from our epistemic access to it.