Derrida on the Metaphysics of Presence 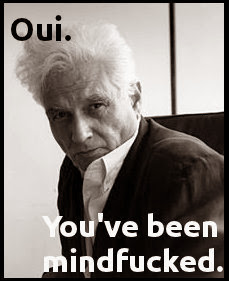 I interpret (or “read”) the term “metaphysics of presence” as referring to the (philosophical) belief that there's a strict and determinate one-to-one relation between between a word/concept and our knowledge (or cognisance) of its meaning. I also believe that Jacques Derrida stretched this out to include many - or all - aspects of Western philosophy and religion (dating back to the ancient Greeks).

The Western fixation (or belief), so Derrida claimed, is that we could gain a precise and exact grasp of what a word/concept means. (Or, more broadly and concretely, what “truth”, “justice”, “knowledge”, etc. mean.) But in the case of words/concepts, that's impossible because they bear a stronger relation to other words/concepts than they do to their (abstract) meanings. (Or, in Derrida's jargon, “signifiers” bear a stronger relation to other signifiers than they do to what they “signify” – or to the “signified”) What you get, then, is a kind of semantic holism in which a word's meaning ripples out (as it were) to all the other words in the given language (langue or system) - or at least to those words to which it is directly connected. That means that no one person (by virtue of semantic holism) can fully grasp the meaning - or determine the complete meaning - of a word/concept.

This lack of “presence” (see also “trace”) also applies (as stated) to all philosophical concepts: such as truth, freedom, knowledge, God, etc. In other words, there is no metaphysics of presence.

So, yes, there is no fixed center to consciousness or the self either; though Derrida, again, didn't put it that way. However, if this is just a denial of the self (or a critique of essentialism), then Derrida was hardly original in this respect. That's because such a critque can be found in, for example, David Hume (who both was and wasn't an essentialist). In addition, philosophical anti/non-essentialism dates back to the ancient Greeks.

Derrida’s views on the self and his anti-essentialism are (somewhat) separable from his views on the metaphysics of presence (which I've commented upon); though there are obvious connections.

It's difficult to understand Derrida. However, I don't think that this has anything to do with the complexity or deepness of his thought. Often what he says (if after you've unpacked it) is often pretty obvious and sometimes truistic. Either that or it's been said before; which isn't to say that no other philosopher has repeated what previous philosophers have said.

What is different with Derrida is, specifically, his (“deconstructive”) prose style; which largely belongs to a particular Continental (specifically French) tradition. Partly because of that you'll find endless neologisms; which, to those outside Derrida's fan-base, will prove to be flummoxing. In addition, there's a strong sense of one-upmanship, outflanking, pretentiousness, being deliberately outré, self-conscious philosophical radicalism, philosophical exhibitionism, point-scoring against the last (usually French) "radical philosopher" who's just died or gone, excess, etc. which also makes Derrida's work hard to understand - at least as far as I'm concerned. However, if you'd said all that to Derrida himself (or to a fan of Derrida), you probably wouldn't be able to understand his reply (a scholar - or follower - of Derrida would understand it). And that, no doubt, would have been precisely Derrida's intention.

Final Note on the Opening Meme

It's quite possible that Derrida would have taken the claim that he fucked minds as some kind of compliment. Though, of course, he would never have said, “I take that as a compliment.” He would, instead, have said the same thing in pretentious deconstructionese; perhaps to hide the simplicity and possible banality of his words.

Posted by Paul Austin Murphy at 06:47