David Chalmers on the Hard & Soft Problems of Consciousness David Chalmers makes the helpful distinction between the ‘hard’ and ‘soft’ problems of consciousness.


The soft problem includes the ability to discriminate stimuli, or to report information, or to monitor internal states, or to control behaviour. Prima facie, you can see that these problems can be accounted for in third-person or scientific terms. For example, someone can tell us how they discriminate stimuli with his verbal reports. All this can also be explained neurobiologically. The same goes for the reports of information that we can achieve or carry out. (The problematic ‘easy problem’ is the monitoring of internal states which, prima facie, doesn't seem scientifically kosher.) 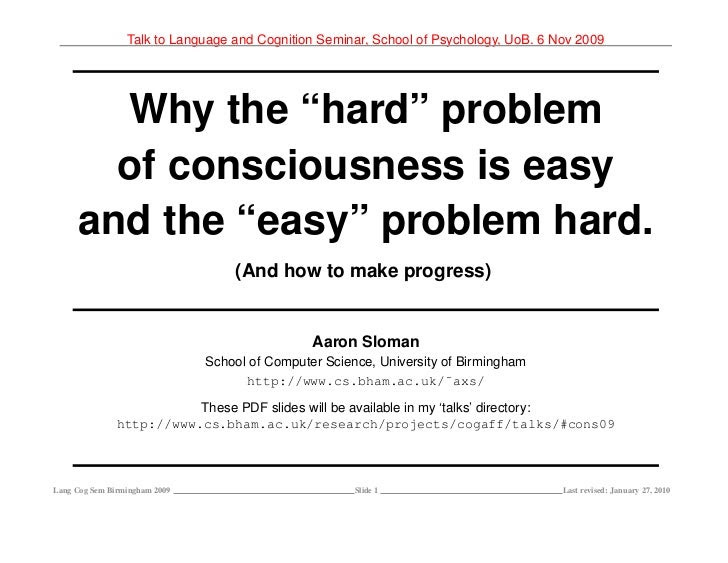 
Chalmers is more precise about this phrase ‘what it is like’. He introduces explanatory technical terms to do so.


For example, conscious states have a phenomenal character with phenomenal properties that characterise what it is like to be in that state.


What, then, are phenomenal properties? The conscious state of perceiving a red apple has phenomenal properties. The properties include the experience of the colour red or the feel of the apple. A toothache can be ‘nagging’ and other pains can be sharp or blunt. The mental image of Tony Blair will have certain phenomenal properties, such as the redness of his face or the emotional responses to the image. Similarly, depressions may be painful or tiring and may engender other phenomenal properties such as lethargy or anger. And even an arithmetical cognition can be accompanied by certain emotions such as that of excitement or tedium.


Chalmers then asks a fundamentally different and equally important question about consciousness.

“How and why do physical processes give rise to experience?”

Intuitively, consciousness, experience or mentality doesn't seem physical at all. How is my mental image of Tony Blair in any way physical? Is my sensation of the red of a red apple in any way physical? And so on. The relation between the physical and the mental is problematic because we can imagine that all the physical processes and events could happen without giving rise to any conscious experience. Such functions and processes “could occur in the dark”. Chalmers calls this problem the “central mystery of consciousness”.


Let's get back to the ‘easy problems’.


What are the easy problems and why are they easy?


These problems are about certain behavioural or cognitive functions. If we lift one leg and are conscious of lifting one leg this can be explained in neurological and neurophysiological terms. As for cognitive functions, these too can be explained in neurological terms, or at least in principle they could be. More explicitly, we can talk in terms of the causal role of a function in a cognitive system and how such causal roles, within the brain, cause us to lift one leg or make a logical inference from p to q. The function takes on the form of a causal role in the production of behaviour and we need only see what exactly the mechanisms within the brain and body are that carry out such causal roles.


In terms of the brain, Chalmers states that such mechanisms are neural or computational in nature (why computational?). As for examples of these functions or causal roles, we can site discrimination, integration, access, report and control. We can intellectually distinguish a cow from a horse. We can integrate new knowledge with old knowledge. We can access our memory system or even past mental images. We can report internal states and past perceptions. We can control our behaviour through cognition as when we build a house. Though, alas, why are any of these mental functions accompanied by experience?


And so we have ventured on to the hard problem of consciousness.


What is the relation between these physical functions in the brain and experience? Such a relation would need to abide by ‘natural principles’ if it is to stand the test of materialism or physicalism. What is it about physical processes that bring about states of consciousness? Why do they do so in the first place?