Einstein was a Fraud 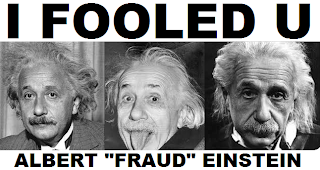 “The main reason Einstein was chosen to be the ambassador of physics is because he was Jewish and it would have be considered racist to criticize any of his theories. This is how the system uses political correctness to protect corrupt and deviate theories and ideas. Einstein completely obliterated the use of logic in science by introducing his his crazy ideas of relativity and curved space time which has destroyed logical science to this day.” - DarwinX


This is a reply to a comment I found on the Internet. DarwinX articulates the view that many people held about Albert Einstein in the 1920s and beyond and still do today.

The idea that people on the whole - especially scientists - wouldn't criticise Einstein's theories because he was Jewish is incredible. Science simply doesn't work like that on the whole - or even at all. What would have happened if another Jewish scientist produced theories which directly contradicted Einstein on relativity and curved space? (In fact this happened!) Would that have meant that, for reasons of political correctness, scientists would have had to accept both Einstein’s theories and their contradictions because both scientists were Jewish? And Einstein based a lot of his theories on previous theories and mathematical work constructed by scientists who weren't Jewish. Does this mean that the non-Jewish bits aren't "corrupt" and the Jewish remainder is corrupt?

In any case, what's intrinsically Jewish about relativity theory?

In 20th century philosophy, for example, Jewish philosophers - from Ludwig Wittgenstein to Thomas Nagel - have advanced theories which directly contradicted each other. Does that mean that both a Jewish theory and its direct contradiction are corrupt and therefore equally Jewish?

I doubt there have been any scientists - except in someone's imagination - who would have refrained from criticising Einstein's theories simply because he was Jewish. In fact the stronger possibility is in the reverse direction: that Einstein’s theories would have been criticised simply because they were advanced by a Jewish person. (They were, in fact, criticised for precisely that reason by Hitler and others.)

How can scientific theories be corrupt anyway? They can be false, misguided, not based on good theory or sound evidence, etc. - but corrupt?

If science isn't a communal activity, then it's not science at all. And, as a communal activity, science, on the whole, accepts relativity theory and the curvature of space. (This doesn't mean that they will be accepted – as they are – for all time or that they won't be adapted in some way... they have been.) I simply don't know enough about physics and astrophysics myself to offer anything new on relativity and curved space. I certainly don't know enough to criticise these theories. You would need to be a higher mathematician, an advanced physicist or a cosmologist/astrophysicist to offer any justifiable criticisms of relativity theory and curved space - never mind to offer theories which attempt to refute them outright.

[DarwinX went on to say:]

"Science is not a matter of opinion or consensus. There is only truth and reality. A consensus has nothing to do with truth or reality. Organizing science according to the dictates of consensus leads to corruption and bogus science."


Saying that science is a communal activity isn't the same as saying that truth (or accurate theories about the world) are determined by the vote or by mindless agreement. The point about a scientific community is that it's better to trust many workers in the field, than to trust some individual scientist (or pseudo-scientist) who comes up with a theory he thinks is true or accurate.

Science is so complex and intricate that one person could rarely have the whole truth on a single theory or position. Even great and original scientists - such as Newton and, yes, Einstein - worked largely within scientific traditions and communities even if their new theories weren't immediately accepted by everyone. In any case, despite their originality, that originality and accuracy still had to be accepted and agreed upon by the scientific community as a whole – as they indeed were.

Why should anyone accept the views of a lone scientist if he works completely in isolation and with no back up from anyone besides those who already agree with him (perhaps for political reasons)? This is especially true if those who agree with a lone persons (on, say, the contradictions of relativity theory) aren't themselves scientists. This simply leads to the question:


Why are people accepting the theories of these lone (or eccentric) scientists when they aren't themselves scientists and when most other scientists reject these theories?


All I can say is that there are non-scientific (e.g., political) reasons - not reasons of what DarwinX calls  “truth and reality” - which are motivating these agreements with these alternative theories.

[Then there was more from DarwinX:]

"Don't be intimidated by science theory. Real science is not difficult to understand. Bogus science tends to be over complicated and confusing, mainly because its main objective is to confuse and complicate simple matters."


I've never heard that said before. Does this mean that science as it's presented in popular-science books or the science as it is done by scientists themselves? There's a massive difference. Yes, some popular-science writers do a marvelous job of clearly expressing scientific ideas. Though even they wouldn't say that “real science is not difficult to understand”. The basics aren't difficult, sure; though that's because all the mathematics, specialised technical theory and detail are simply missed out in popular-science books. Yes, popular science books are easy to understand; though popular (or simplified) expositions of science aren't themselves science. They are about science.

Everything said about science by DarwinX (as well as about Einstein) is deeply imbued with his political view on things. (Whether his general political positions are true or not is irrelevant to the point I'm making.) His politics is in the driving seat and it's completely determining his positions on science. Now that may not be a bad thing in itself. It depends on how much he really knows about science – not about the popular expositions of science by non-scientists and even sometimes by scientists. Again, his primary concern is politics; not science. His politics is being applied across the board so that he even sees politics in everything scientific - and, no doubt, in all things non-scientific too.

Posted by Paul Austin Murphy at 08:57