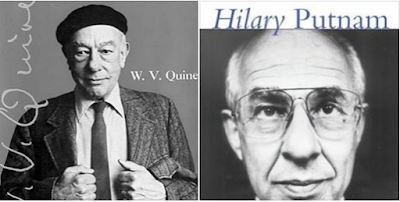 "we should just abandon the notions of justification, good reason, warranted assertion, etc., and reconstrue the notion of 'evidence' (so that the 'evidence' becomes the sensory stimulations that cause us to have the scientific beliefs we have)".

That's because Putnam believed that “justification, good reason, warranted assertion”, etc. are normative notions and (as we're often told) “Quine wanted to abandon the normative”. Whether or not Quine really did want to abandon all these notions, the very possibility of abandoning them seems extreme (at least in epistemology or even science). What would we have left? Well, for Putnam’s Quine, we would have “evidence” – or evidence which is reconstrued to be "the sensory stimulations that cause us to have the scientific beliefs we have".

Sensory Stimulations, Beliefs and the Normative

So whereas Putnam was saying that Quine wanted to abandon the normative in his project of naturalised epistemology, Davidson and Jaegwon Kim claimed that Quine couldn't have done this even if he had wanted to. Of course if sensory stimulations were so free of the normative (or even if they do actually exist as Quine saw them), then talk of sensory stimulations providing “input” - and the assertions they cause being seen as “output” - would be a purely descriptive - not a normative - epistemology (which is what Putnam claimed Quine really wanted).

Putnam went further than this. His basic argument was that if Quine abandoned the normative, then it followed that he must also have abandoned - or given up on - “truth”. Rather than saying (as many philosophers do) that notions of justification, rational acceptability, warranted assertibility, right assertibility, etc. are alternatives to truth, Putnam argued that they all assume or/and rely on the notion of truth from the very start.

For example, the justification (or warranted assertibility) of p is relative to the truth of p. That is my first take on Putnam’s position. However, Putnam himself explained the Quinian implicit rejection of truth in this way. He argued that

"the notions the naturalistic metaphysician uses to explain truth and reference, for example the notion of causality (explanation) and the notion of the appropriate type of causal chain depend on notions which presuppose the notion of reasonableness".

Here too the predicates “important” and “relevant” are normative in nature. To put this in Davidson’s way: causation “is not itself explanatory”. Causation is neither evidence for - nor an explanation of - anything. In Davidson’s terms again, beliefs fulfil these roles. And as already stated, beliefs can't help but have a normative component.

These arguments against Quine’s naturalism can be applied to a more specific approach – or alternative – to the normative notion of justification.

Here again we can say that normative factors will be involved in our assessments of what actually is an example of a reliable process (or a reliable method). Indeed the very choice of reliability as an epistemic virtue will itself have required normative choices and constraints. More specifically, the “replacement” of justification with reliability must involve (or must have involved) normative decisions and judgments as to the value of reliability - or reliable processes - in the epistemological project...

For example, why reliable methods (or processes) rather than the methods (or processes) of clairvoyance? Is it because clairvoyance isn't a reliable process (or method)? Wouldn’t that be a circular justification (whether virtuous or vicious)? Even after reliabilism has been chosen as a tool of epistemology, normative decisions and judgements will still be required and used by the reliabilist.

Posted by Paul Austin Murphy at 09:10