Are the Laws of Physics Necessary or Contingent? 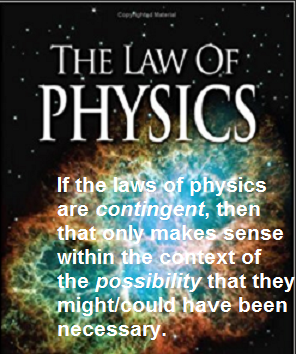 The laws of physics (or nature) are necessary for x.

what is he/she saying? That the laws of physics couldn't have been any other way? Possibly.

Why is it necessary that the laws were/are the way they were/are?

It can be said that it was necessary that they were the way they were in order to bring about the universe we know today. Here again, this is about the (necessary) relation between the laws and the nature of the universe today or indeed at any time. It's not about the laws as they were/are in and of themselves.

All this works for the words “accidental”, “contingency” and “chance” too. Thus:

If the laws of physics are contingent (or accidental), then that only makes sense in the context of the possibility that they might/could have been necessary.

There is another option which some people make (or simply hint at). 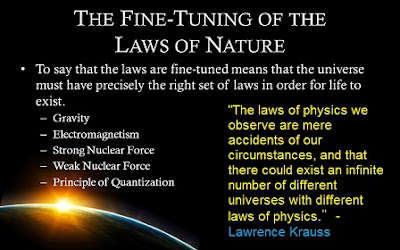 The physical constants necessarily have their strengths, values, etc. because God made them that way in order to bring about the universe (as well as the people) we know today. (For example, the speed of light, the gravitational constant, the Planck constant, the elementary charge of a proton or electron, etc.)

Though here again that necessity is smuggled in to explain why people are here today and also why the universe is the way it is today. That necessity doesn't (or may not) belong to the laws themselves.

Similarly, when Lawrence Krauss says that

what is he actually saying?

More specifically, what function is the word “accident” fulling here? If the laws of physics weren't/aren't accidents (or accidental), then what could they be? Necessary? And if they were/are necessary, then what does that mean? Moreover, if the word “accident” has no purchase here, then neither has the word “necessary”. That's because modal logicians and philosophers often tell us that modal notions only make sense as a package-deal. In this instance, the notion of accident (or contingency) only has purchase alongside necessity; just as possibility (which itself is related to accident/contingency/chance) can only work alongside necessity.

If one is a believer in possible worlds (or, alternatively, if one believes that an acceptance of modal notions necessitates a belief in possible worlds), then one won't have a problem with the laws of physics being contingent. This is how John Earman puts it:

“Laws are contingent, i.e., they are not true in all possible worlds.”

Of course we may not need to smuggle in possible worlds in order to question the assumption that laws must either be contingent or necessary. In any case, possible worlds are - by definition (or at least David Lewis's definition) - causally, spatially and temporally cut off from us. So, from a strictly scientific perspective, they're (almost?) irrelevant.

There's also another very simple point. The possibility that physical laws may - or even will - be different at other possible worlds doesn't it stop it from being the case that the laws of physics are universal; just as it doesn't stop them from being contingent or necessary at our world. Then again, if necessity is "what is true at all worlds", and if the laws of our world are necessary, then their necessity must be replicated at all possible worlds.