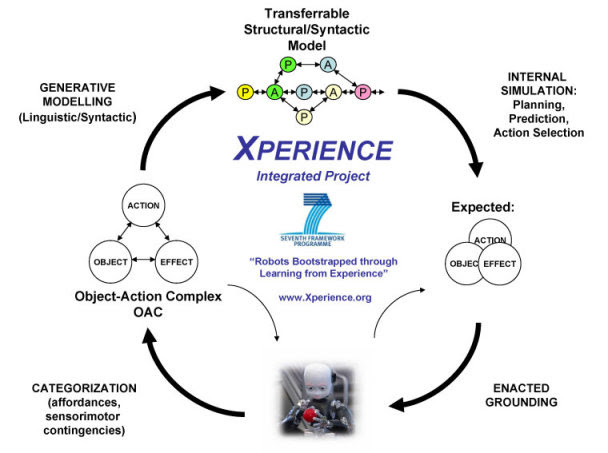 It can be said (just to get it out of the way) that there's no direct denial of the world (or of an “independent reality”) by any/most theorists of embodied cognition. Neither is there a stress on subjectivity. What theorists of embodied cognition do claim is that the way the world is perceived (as well as how it's conceptualised and categorised) is determined by how each animal (including human beings) is embodied within the world.


It can also be said that metaphysical realists have always known about the “limitations” of our senses and minds when it comes to correctly understanding the world. They believed that those limitations, however, must be transcended in order to represent the world in the most accurate (or truthful) way possible. Of course many would argue that human beings can't transcend their embodiment in that they can't escape from their physiological and anatomical nature (which, in turn, determines our sensorimotor experiences). Yet reason and cognition itself (even if embodied) can surely transcend some of these limitations.


In a certain sense (weak or strong) it can be said that some of those engaged in embodied cognition are anti-realists or even idealists (of some other appropriate metaphysical ist). Indeed many uphold the self-description "constructivists".


In terms of anti-realism, it's the case that theorists of embodiment don't uphold the cognitivist/classicist (or, for that matter, realist) position that the world is determinate and “cut at the joints” into kinds/universals, facts or whatever. Or, rather, they happily admit that this may well be so. Nonetheless, such a world isn't passively mirrored or even represented by our cognitive system/s. Instead, because human beings are built in very particular ways (as well as being essentially “goal-directed”), this largely accounts for how the world is represented or even given to us. Thus even if the world is determinate and neatly cut at the joints, that wouldn't matter because our sensorimotor systems aren't built to perfectly replicate that cut-up world.


Whether cognitivists/classicists are realists in the traditional metaphysical sense is hard to say. They're certainly seen (by workers in embodied cognition) as viewing human beings (as well as other organisms) as passive re-presenters of a determinate and circumscribed world. Or, in Richard Rorty's phrase, (at least some) cognitivists see human minds as “mirrors of nature”.


I've just compared embodied cognitivists to anti-realists; though pragmatists is also a good description of them – at least in a limited sense.


Many evolutionary theorists and pragmatists have often said (in the last 100 years or so) that, from an evolutionary point of view, there's often little point in mirroring or even (precisely) representing nature. (That's if it's metaphysically possible in the first place.) Like the theorists of embodiment, they've argued that the precise mirroring of nature can often be counter-productive from an evolutionary (or goal-directed) point of view. More precisely, accurate representations (or even truthful ones) may end up being time-consuming or irrelevant. What matters is getting a job done. And that job is (usually) survival.


Are the theorists of embodiment taking a line similar to that which the British Empiricists took when they argue that the formation of mental concepts and categories is determined – or made possible – by the specific sensorimotor experiences (as well as their limitations) animals have?


This is empiricist in that our senses (or our sensorimotor experiences) are seen to be the basis of later concepts and categories. That parallels (at least to some extent) the British empiricist theory that “sense impressions” are the basis of later “ideas”. Indeed John Locke famously said that there's “nothing in the mind that wasn't first in the senses” [1690]. Cognitivists of embodiment, however, add the important detail that humans - as well as other animals - are limited to which concepts and categories they can form by the nature of their sensorimotor experiences and therefore by their physiological and anatomical nature.


So what about Kant?


Kant argued that the our a priori and transcendental “categories” and “concepts” determine (therefore also limit or constrain) all experiences [1787]. In the case of embodied cognition, however, it's not that


What is transcendental (if in a weak or metaphorical sense) is the psychological and anatomical embodiment of the animal concerned. It's that embodiment which will determine the types of sensorimotor experiences animals have. Thus those embodied experiences also determine the nature of the resultant concepts and categories formed by human beings and perhaps also by other species of animal.


The Construction of the Physical/Social World


Instead of emphasising how "conceptual schemes", languages, "language games", "paradigms", epistemes, etc. somehow “construct” the world (as relativists, anti-realists, etc. have done), theorists of embodiment emphasise how bodies, sensorimotor experience, engagement and the environment play parts in constructing the world.


In the case of relativists, anti-realists and older types of constructivist, the arrow pointed from mind to world. However, in the case of embodied cognition, the arrow seems to point from world to mind. Thus:


On close inspection, however, it may be better to say that for the theorists of embodiment the arrow points in both directions: from world to mind/body and from mind/body to world. That's partly because the world hasn't completely dropped out of the picture. The environment (along with the goal-directed behaviours and actions aimed at that environment) clearly has a causal impact on minds and bodies. However, the sensory and embodied nature of human beings helps us “construct” (to some extent) that world at the very same time. Thus:


Nonetheless, some philosophers have moved beyond the simple physiological and embodied construction of the physical world into areas which are a little bit more controversial.


George Lakoff and Mark Johnson [2003], for example, argue that such embodied constructions involve the projection of “schemas” which help us to understand the world. The important point here is that this understanding is deemed (by Lakoff and Johnson) to be “metaphorical” in nature.


Constructivist positions can also take on an explicitly political hue. In constructivist epistemology, for example, construction is seen (at least by people like Ernst von Glaserfeld [1989]) as being a “radical, creative, revisionist process”; not one of mirroring nature or even one of representing (as such) the world. In this process, human beings (or persons) construct a tailor-made “knowledge system” that represents not nature and society; but a subject's experiences of nature and society. Not only that: the knowledge-system is intended to (politically) rectify the existing representations/constructions of the world which the subject is unhappy with.