In the following I will argue against the paraconsistent acceptance of inconsistencies. I also question the acceptance of logical explosion and logical triviality by classical logicians.

As C.I. Lewis once claimed (quoted by Bryson Brown), no one “'really accepts contradictions'”. From that it can be said that the prime motivation for paraconsistency - as can be gleaned from some paraconsistent logicians themselves (at least implicitly) - is entirely epistemological and, sometimes, also based on positions and findings within science (specifically physics).

The following positions are also seemingly at one with the position of David Lewis who argued that it's impossible for a statement and its negation to be true at one and the same time. Having said that, all this depends on what's said about the embracing of both A and ¬A; as well as how it's defended.

Thus if the acceptance of inconsistencies is an epistemological move (as I argue), then that move isn't “really” an acceptance of both A and its negation at one and the same time.

(All the above may or may not be ironic when one bears in mind that relevance logic is a sub-branch/type of paraconsistent logic.) 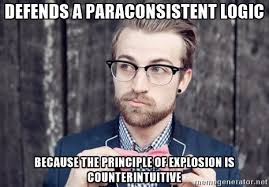 As already stated, Bryson Brown says that “a defender of [C.I.] Lewis's position might argue that we never really accept inconsistent premises” (630). I'm prone, prima facie, to agree with that. Indeed Bryson immediately follows that statement with a defence of inconsistency which doesn't seem to work. Brown says that “[a]fter all, we are finite thinkers who do not always see the consequences of everything we accept”. Perhaps C.I. Lewis's reply to that might have been that we don't “accept inconsistent premises” that we know - or that think we know - to be inconsistent. Sure, having finite minds is a limit on what we can know. Nonetheless, we still don't accept the conjunction A ∧ ¬A; at least not in its (empty) symbolic form. Though it needn't always be entirely a problem of symbolic autonyms. Paraconsistent logicians don't accept 1 = 0 either; and we don't accept the disjunctive statement “John is all black and John is all white”.

Dale Jacquette puts the paraconsistent position when he says that “logical inconsistencies need not explosively entail any and every proposition” (7). What's more, “contradictions can be tolerated without trivialising all inferences”. There we have the twin problems (for paraconsistent logic) of logical explosion ( or ex contradictione sequitur quodlibet) and logical triviality.

To be honest, I never really understood the logical rule that “if someone grants you (or anyone) [inconsistent] premises, they should be prepared to grant you anything at all (how could they object to B, having already accepted A and ¬A?)” (Brown, 628). I was never sure how this worked. I was never sure of the logic - or is it the philosophy? - behind it. In other words, how does anything follow from an inconsistent pair of premises (or propositions), let alone everything? An inconsistent pair surely can't have any consequences – at least not any obvious ones. (You can derive, I suppose, trivialities such as ¬¬A ∧ ¬A and similar conclusions or premises.) In terms of truth conditions (if we take our symbols - or logical arguments – to have truth conditions or extensional interpretations), how could we derive anything from the premises “John is a murderer” and “John is not a murderer”? Again, there are (indirect) trivial consequences; though none of interest. (E.g. that “John is a person”?)

In terms of the logic of explosion, let's take it step by step so it can be shown where the problems are. One symbolisation can begin in this way:

So far, so good (at least in part). If the conjunction P ∧ ¬P is assumed to be true (which paraconsistent logicians accept, though others don't), then of course P (on its own) must also be true. Here, the inference itself is (kind of) classical; even though the conjunction of P and its negation isn't.

Following on from that, we have the following:

ii) From i) above, it follows that at least one of the claims, P, and some other (arbitrary) claim A, are true.

This is where the first problem (apart from the conjunction of contradictories) is found. It can be said that some proposition or other must be the consequence of P; though how can that consequence (A) be arbitrary? An arbitrary A doesn't follow from P. Or, more correctly, some arbitrary A may well follow; though not any arbitrary A (this is regardless of whether or not A, like P, is true).

Thus perhaps this isn't about consequence.

A, instead, may just sit (i.e. be consistent or coherent) with P without being a consequence of P; or without it following from P. Thus if A isn't a consequence of P (or it doesn't follow from A), then the only factor of similarity it must have with P is that it's true. Though, if that's the case, why put A with P at all? Why not say that P is arbitrary too? If there's no propositional parameter between P and A, and if A doesn't follow as a consequence of P, then why state (or mention) A at all? Moreover, why does A follow from P?

Then comes the next bit of the argument for explosion. Thus:

iii) If we know that either P or A is true, and also that P is not true (that ¬P is true), we can conclude that A - which can be anything - is true.

Thus if a theory contains a single inconsistency, it is trivial — that is, it has every sentence as a theorem.

There are two problems here, both related to the points I've already made about logical explosion. Why does an “inconsistency” have “every sentence as a theorem”? Sure, if this is true, then one can see the triviality of the situation. Nonetheless, I simply can't see how the conjunction P ∧ ¬P generates every sentence as a theorem; or, indeed, even a single sentence. Strictly speaking, the conjunction P ∧ ¬P generates nothing!

This isn't to say that inconsistencies aren't a problem for theories. Of course they are. Though saying that the conjunction P ∧ ¬P itself generates every sentence as a theorem is another thing entirely. Or is it?...

At the beginning of the last paragraph I confessed to rarely having seen a logical defence of logical explosion – only bald statements of it. However, Bryson Brown does present C.I. Lewis's proof of logical triviality (the bedfellow of explosion). Nonetheless, before that Brown says that “this defence [of Triv] is just a rhetorical dodge”. And that's how I see it. It seems that the logical rule that “from any inconsistent premise set, every sentence of the language follows” is rhetorical in nature.

In terms of the logical notion of the unsatisfiable nature of premise sets, things seem to be much more acceptable. Firstly, this is Brown's formulation:

“A set Γ is inconsistent iff its closure under deduction includes both α and ¬α for some sentence α; it is unsatisfiable if there is no admissible valuation that satisfies all member of Γ.”

Unlike Triv, this seems perfectly acceptable. Of course there's “no admissible valuation” of α & ¬α! (At least not in my book.)

If relevance logic is a type of paraconsistent logic, then that may well be relevant to some - or many - of the points raised above about explosion and triviality. My point is that if relevance is a logical stance, then nothing explodes from accepting both P and ¬P because it's not the case than an arbitrary A can follow from a conjunctive inconsistency. Nor does it follow that if both P and ¬P are part of a theory, it trivially brings about every sentence as a theorem.

On the other hand, if we accept relevance, then the very acceptance of a conjunctive contradiction (or inconsistency) may also be problematic. If both P and ¬P are accepted, it's hard to see relevant derivations or consequences which follow from contradictory propositions. For example, what follows from the propositions “The earth is in the solar system” and “It is not the case that the earth is in the solar system”? Taken individually, of course, much follows from either P or ¬P; though not when taken together as jointly true.

In symbols, the above is expressed in the following way:

If A → B is a theorem,
then A and B share a non-logical constant (sometimes called a propositional parameter).

On the other hand, that (indirectly) means that

can't be a argument in relevance logic.

1 To show how radically non-relevant the principle of explosion is, let's deal with everyday statements rather than - possibly misleading - symbolic letters. Thus: