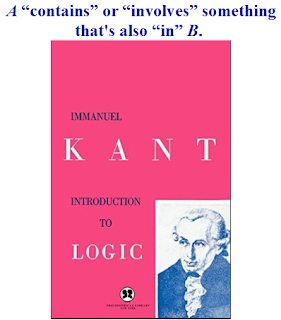 On an old reading, the statement

is taken to be true (or false) because

B “contains” or “involves” something that is also “in” A.

This is the standard Kantian view of implication (or, later, synonym-based analyticity). However, B can be the consequence of A without it “containing” or “involving” something that's common to A. How, then, would B be a consequence of A? In physical nature, A can cause B without sharing anything with B. Non physically, B can also be deduced from A without sharing anything with A. If all that's so, how does this deduction or implication actually come about?

(All this hints at both “relevance logic” and “material implication”; as well as at the sharing of “propositional parameters”.)

We can also ask what it means to say that “B is contained within A”? Quine accused Kant of speaking at a metaphorical level when talking about “containment”. Thus what non-metaphorical way have we of describing what's at issue here? (If A is simply an inscription or “syntactic form”, then of course it can’t contain B – it can’t really contain anything except itself.)

So A will demand content if it's to imply B. In that case, it all depends on what the symbol A stands for. Is it a concept, sentence, statement or a proposition? All these possibilities have content.

However, we can ask within which context we can categorise [politician] as a micro-concept. There's a simple way to decide what is what. We can ask this question.

Is it necessary for a politician to be a person or a human being?

The answer is no. It's not logically necessary; though what's been said is empirically the case. (A robot, computer or alien could be a politician.)

Is it necessary for a human being or person to be a politician?

The answer is: Of course not! In this simple sense the macro-concepts encompass the micro-concepts. Of course there are yet higher levels of concept. For example, [biped] and [animal]. This would include the concepts [human being] and [person]. And there are yet higher-order concepts than that. For example, [living thing] and [organism]. This could go on until we reach the concepts [object], [thing], [entity], [spatiotemporal slice] and so on.

If A is taken to be a concept, then it may well have a huge amount of implicit and explicit content. It could imply all sorts of things. However, it's a strange thing to take A as simply something standing for a single concept. It's hard to make sense of a concept all on its own (as it were). We need to fill in the dots ourselves.

If A is a sentence, then things become a little clearer and not as broad-ranging. The sentence may of course include concepts; though such concepts - within a sentential framework - will be more finely delineated and circumscribed. Something will be said about the concepts contained and they may be contextualised.

To say that the concept [politician] implies the concepts [human being] and [person] just sounds strange. In a sense, the bare concept [politician] isn't actually saying anything. The idea of containment must be taken less literally in the case of A standing for a concept than when if A stands for statements, sentences, etc.  This parallels, to a small extent, Frege's “context principle”.

Posted by Paul Austin Murphy at 18:59