The Problem with String Theory & Panpsychism: the Aesthetics of Theory-Choice (3) 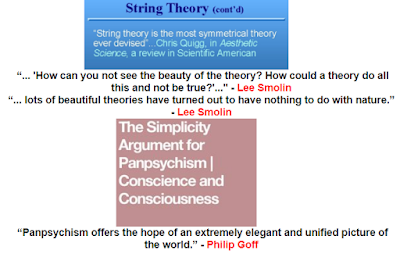 Much is made (by both laypersons and scientists) of the fact that many mathematicians and physicists stress the “beauty” and “elegance” of their theories. Philosophical panpsychists do the same. Indeed the aesthetic values of both string theory and panpsychism may even be their major appeal.

So perhaps there's an over-indulgence in (or over-reliance on) aesthetics in both panpsychism and string theory.

Lee Smolin (in his book, The Trouble With Physics) quotes string theorists talking about the beauty of the theory (or theories) in the following:

“... 'How can you not see the beauty of the theory? How could a theory do all this and not be true?' say the string theorists.”

Smolin is at his most explicit when he also tells us that “string theorists are passionate about is that the theory is beautiful or 'elegant'”. However, he says that

“[t]his is something of an aesthetic judgment that people may disagree about, so I'm not sure how it should be evaluated”.

“In any case, [aesthetics] has no role in an objective assessment of the accomplishments of the theory.... lots of beautiful theories have turned out to have nothing to do with nature.”

Perhaps Smolin is going too far here. Surely it's the case that aesthetics has some role to play when it comes to theory-choice. And who's to say that whether a theory is elegant or not – at least in some sense - isn't itself an “objective” issue? Whether something is simpler than another theory is surely an objective fact. It's whether or not such simplicity can also be tied to elegance and beauty that's the issue here. (See later section.)

Despite that, Smolin does quote a string theorist (ironically enough), Leonard Susskind, arguing that simplicity and elegance aren't everything. (In this instance, Susskind talks about “anthropic theory”; though this is tied in with string theory – at least for Susskind.) Smolin quotes Susskind thus:

“… '… in an anthropic theory simplicity and elegance are not considerations. The only criteria for choosing a vacuum is utility...'.”

So with some – or all - theories, “utility” may – at some point - override “simplicity and elegance”. Isn't that also true of string theory? It can't be, surely. As yet, it can't be said that string theory has any utility, either in terms of technology or in terms of predictions or experiments. (Perhaps the anthropic theory may run somewhat free of string theory, at least according to Leonard Susskind.)

In terms of panpsychism, the philosopher Philip Goff stresses “scientific values” when he talks about panpsychism. (He says that “panpsychism is a scientific research programme in its own right”.) He also tells us that panpsychism is “parsimonious” and “extremely elegant”. In his piece, 'The Case For Panpsychism', he writes:

“Panpsychism offers the hope of an extremely elegant and unified picture of the world. In contrast to substance dualism (the view that the universe consists of two kinds of substance, matter and mind), panpsychism does not involve minds popping into existence as certain forms of complex life emerge, or else a soul descending from an immaterial realm at the moment of conception.”

It's usually theories in physics and mathematics – not philosophy – which are seen to be “elegant”, “unified” and “parsimonious”. Perhaps that doesn't really matter. Perhaps philosophy too should adhere to these aesthetic values. Nonetheless, panpsychist philosophers are doing something that's very different to that which physicists and mathematicians do. There may indeed be similarities here and there; though, on the whole, surely the dissimilarities are more striking.

Both string theory and panpsychism offer us so much. Primarily, they offer us unification. And these package deals also offer us their unifications in ways which are very neat and (as it's often put) “elegant”.

In any case, after so many failures in physics and the philosophy of mind, surely it's time to come up with a solution (or a theory) which offers us unification. Both panpsychism and string theory offer us such a solution.

So what does string theory offer us? According to Lee Smolin:

As evolutionary psychologists and cognitive scientists have told us, human beings have an innate need for both simplicity and explanation – sometimes (or even oftentimes) at the expense of truth. Thus, in the case of string theory, we may have a juxtaposition of the psychological need for simplicity and explanation along with highly-complicated and arcane mathematics.

Perhaps that highly-complicated maths is but a means to secure us simplicity and explanation. That is, the work done towards simplicity and explanation is very complex and difficult; though the result – a theory which is both simple and highly explanatory – evidently isn't. After all, in terms of the omnipresent Theory of Everything, for example, the science journalist and author, Dan Falk, suggests that

“the ideas at the heart of the theory may turn out to be extremely simple – so simple, in fact, that the essence of the theory can be written on a T-shirt”.

(This wouldn't be that unlike the Hitchhiker's Guide to the Galaxy theory that the "answer to the Ultimate Question of Life, the Universe, and Everything" is the number 42.)

Lee Smolin also tackles the issue of the aesthetics of physics within the specific context of scientific unification. And, of course, string theory is a great unifier. Smolin writes:

“There are good lessons here for would-be unifiers. One is that mathematical beauty can be misleading.”

What's more, he concludes by saying that “simple observations made from the data are often more important”.

It's fairly hard to make sense of the word “misleading” here except to say that the statement “beauty is truth” may not be a truth itself. Or at least it may not always be applicable to every mathematical or physical theory.

The other point Smolin stresses is that maths should never run free of reality. Or, in this case, from “observations made from the data”. Of course theories (or at least hypotheses or speculations) often come before observations and data. However, they must still – at least at some point - be justified or legitimised by observation and data: or by reality.

In terms of panpsychism, it too is a unifying philosophical theory. For a start, it's generally regarded as a kind of monism. That is, it unites the seemingly physical with the seemingly non-physical. That means that it can hardly fail to be unifying. (The philosopher Philip Goff also says that “the nature of macroscopic things is continuous with the nature of microscopic things”.) More technically, if all entities (even the elements of fields and forces), are (to use Goff's term) “little subjects” (or little minds), then that must mean that there's no huge jump from these entities to human consciousness (or human minds). It's minds all the way down. What can be simpler than that? What can be more unified than that?

Not accepting this position - according to Goff - “adds complexity, discontinuity and mystery”. This makes panpsychist monism seem very need and tidy. Or, as Goff often puts it, it makes panpsychist monism “elegant” and “parsimonious”. But does neatness, elegance and parsimony make this theory true? Not really. Aesthetic criteria may contribute to our reasons for accepting it, though such things surely don't – in and of themselves - make a theory true, accurate or valid.

Yet anything can explain anything else if the links are suitably tangential. It's whether or not we should believe (or accept) that particular explanation which matters. Many religions, after all, explain many – sometimes all - things. It's true that Philip Goff may say that these positions don't hold much philosophical or scientific water; yet exactly the same is said about panpsychism. Indeed panpsychism (according to Goff) is classed as “crazy”.

So frustration about the nature of consciousness, the mind-body-problem, etc. shouldn't entirely motivate us to accept the elegant and parsimonious theory of panpsychism. There has to be more to it than aesthetics.

This is partly why Raymond Tallis (in his piece 'Against Panpsychism') correctly smells the “ontology of the gaps” (which is a variant of the “God of the gaps”) when it comes to panpsychism.

The panpsychist idea is that no theory has satisfactorily explained consciousness. Thus:

i) No theory has explained consciousness.
ii) Panpsychism explains consciousness.
Iii) Therefore we should accept panpsychism. (Or, at the least, do research on its behalf.)

The same is true of string theory. Thus:

i) No theory has satisfactorily offered us a grand unification of physics and cosmology.
ii) String theory does.
iii) Therefore we should accept string theory. (Or, at the least, do research on its behalf.)

Thus, after so many failures, surely it's time to come up with a solution. Are string theory and panpsychism such solutions?

There's one strong aspect of this debate the needs to be stated here: the connection between theory and reality. Put simply, a "beautiful theory" (however it's defined) may have no connection at all to reality.

Smolin offers a powerful example of the disjunction of a beautiful theory and reality: the aether theory. Smolin asks:

“Could there have been a more beautiful unification than the aether theory? Not only were light, electricity, and magnetism unified, their unification was unified with matter.”

Then Smolin also offers us an earlier example of such a disjunction. Thus:

“There are many examples of theories based on beautiful mathematics that never had any successes and were never believed, Kepler's first theory of the planetary orbits being the signal example.”

Aesthetically, one may ask a very simple question here:

Why is unification beautiful in and of itself?

That will depend on what one takes beauty to be. You can of course stipulate a link between an x which unifies and x thereby being beautiful. However, what is the aesthetics of such a link?

Is it that unification is also simplification? Thus perhaps we can tie unification to simplicity. After all,

If x is unified both within itself and to other things, then x is also simple.

That simply moves the problem on:

What is the aesthetics of the link between simplicity and beauty?

Posted by Paul Austin Murphy at 23:20