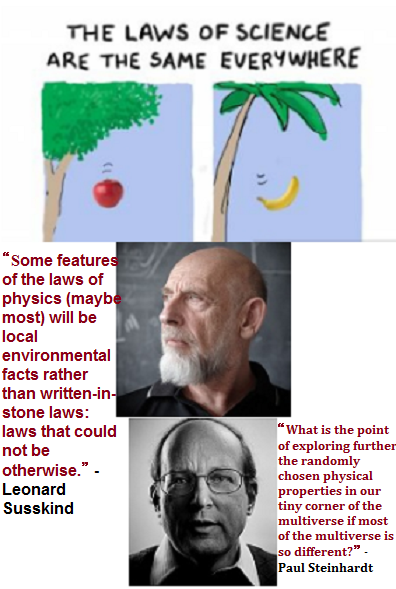 If the laws of physics aren't universal, then wouldn't that have a profound affect not only on physics itself, but also on the pursuit of physics? This is a fairly recent worry for many physicists and cosmologists.

It can now be asked if physicists need their laws to be universal. Yes they do, some may say, in order for there to be laws of physics at all! Others may say that universal laws are required in order to make things simpler (to put it simply). However, can't there be laws of nature which change over time and which don't apply throughout the universe?

The universe itself is... well, universal; though why should the laws of physics also be universal? Of course it can (semantically) be said that the words “law of physics” have the notion of universality built into them. However, isn't that simply a contingent semantic fact (possibly) without any profound or necessary implications?

Despite stating all the above, many definitions of the laws of physics don't even mention their universality.

“The laws of science, scientific laws, or scientific principles are statements that describe or predict a range of phenomena as they appear in nature.”

“Scientific laws summarize and explain a large collection of facts determined by experiment, and are tested based on their ability to predict the results of future experiments.”

Then again, some definitions of the laws of physics do indeed mention their universality. For example:

“Physical laws are Universal. They appear to apply everywhere in the universe....Everything in the universe apparently must comply with them (according to observations).”

In terms specifically of the physical constants (or the “constants of nature”), there's also this definition:

If the laws of physics aren't universal, then what are they?

“If these things prove true, then some features of the laws of physics (maybe most) will be local environmental facts rather than written-in-stone laws – laws that could not be otherwise.”

Despite Susskind's words, physical laws were always meant (historically, philosophically and scientifically) to be universal. That is, all the laws of physics were meant to be instantiated in all cases – whether in all similar experiments, similar conditions, when it came to all planets/stars, etc. Thus some people (in response) may say:

How can there be laws at all if they aren't universal?

National political laws, on the other hand, are (to use Susskind's word) “local”. And there are no “genuine laws” in the philosophy of mind or economics either. That's because there are no mental or economic phenomena which are exceptionless. Another way to put that is to say that various “ceteris paribus clauses” are always shoehorned into “mental laws” or the laws of economics in order to make these laws come out as laws. Yet some scientists and philosophers have also said the same about the laws of physics! (See Nancy Cartwright's How the Laws of Physics Lie.)

So if the laws of nature are of ultimate importance in physics (and those laws are supposed to be universal), then anything that fundamentally challenges this will cause a certain amount of consternation within the community of physicists and beyond. (As we'll see with Paul Steinhardt later.)

Leonard Susskind expresses the worry in this way:

“What... worries may physicists is that the landscape may be so rich that almost anything can be found – any combination of physical constants, particles masses, and so forth. This, they fear, would eliminate the predictive power of physics. Environmental facts are nothing more than environmental facts. They worry that if everything is possible, there will be no way to falsify the theory – or, more to the point, no way to confirm it.”

If Susskind's “landscape” were infinite, then “anything [could] be found”. If we think in terms of the philosopher David Lewis's “possible worlds”, then anything is possible at these worlds - as long as they don't involve logical contradictions, inconsistencies, etc. However, these possible worlds could/do indeed involve different laws of physics and therefore different constants of nature. Thus, as with David Armstrong, we have possible-worlds “combinatorialism” in which not only are properties and facts combined in an indefinite number of ways: so too are the constants of nature.

In terms of Susskind's landscape again: Where does that leave physicists? If laws are “local” or “environmental”, then in what sense are they laws at all? Having said that, is there anything, prima facie, to stop laws from being (merely) local?

Physicists once knew about a universe which they said was “governed by the same physical laws”. However, it came to be seen that this wasn't actually the case. Instead that universe was really divided in four neat-and-tidy sections.

Now within each of those four sections, the laws were then deemed to be “universal” - or at least they applied (across the board) within each section.

Now what's to stop there being (genuine) laws for each of these four sections of a previously (seemingly) homogeneous large section of spacetime? After all, each section still as its own laws which apply within it.

There is a problem: What's to stop this process continuing?

That is, perhaps each of these four sections (of a once-larger section) were itself be broken up into another four sections (now totaling 16 sections). In principle, this could happen! Indeed this could occur ad infinitum. Though it can also be said that it wouldn't necessarily happen. It just possibly could happen.

So how does this thought experiment compare to what we actually know about our universe in 2019? In terms of any possible sub-spatiotemporal sections of our own known universe, does this scenario so much as make sense?

Leonard Susskind also ties the laws of nature to what he calls “the predictive power of physics”. In other words, laws are mainly required for reasons of prediction. So if the laws we uphold aren't universal, then wouldn't prediction prove to be more difficult or even impossible? In other words, if laws don't apply across the board, then how are predictions possible?

Perhaps physical laws are still applicable even in our previous hypothetical subsections of the universe. Therefore perhaps such laws may - or will - still do their job in these hypothetical sections.

So what about predictions about the parts of the universe we've never observed? What about those parts we have limited information about? Again, most physicists want both their laws and predictions to be universal. If this weren't the case, then some physicists may say: What's the point? Well, there are lots of sciences which don't deal with universal or exceptionless laws; such as economics, sociology, psychology and the like. However, these disciplines are “soft sciences”. Physics is a “hard science”.

Would the truth of these speculations mean that all the sciences (including physics) are actually soft – at least in relative terms?

Let's ask the earlier question again: Are the laws of physics universal?

The Albert Einstein Professor of Science at Princeton University, Paul Steinhardt, asks us a simple question (hinted at earlier) which relates our own questions:

There are wording problems with much of what Paul Steinhardt says above. Nonetheless, that may depend on how literally Steinhardt wants his words to be taken.

Posted by Paul Austin Murphy at 21:56