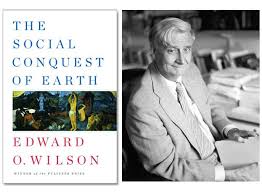 It's not surprising that someone who believes in (universal) consillience should think ethics a suitable subject for science.


How does E.O. Wilson explain science’s relatively new-found interest in ethics (or in what he calls “ethical precepts”)? Wilson writes:


“The objective meaning of ethical precepts comprises the mental processes that assemble them and the genetic and cultural histories by which they evolved. Those who think that an is/ought gap exists have not reasoned through the way the gap is filled by mental process and history.” (70)


This is a very interesting passage from Wilson. Indeed it's almost a confessional one. Clearly it's purely descriptive in nature, not normative. Perhaps it follows from this that it's not ethics at all: it's the study of human ethics (or of ethical precepts). It's “objective” simply because these


“ethical precepts comprises [of] the mental processes that assemble them and the genetic and cultural histories by which they evolved”.


Isn’t ethics about how we should live, not how we do live? In that sense, this isn't ethics at all. It's the sociological or psychological study of human ethics or of ethical precepts. More concretely, if Wilson thinks that ethics is the study of the “genetic and cultural histories by which [ethical precepts] evolved”, then we can't do anything about such causal aetiologies of our ethical standards and principles because such things have (as it were) already happened. Therefore this is simply a causal account of what we believe and what we do in the ethical sphere.


The study of the “mental process that assemble [our ethical precepts]” isn't in itself the domain of ethics: it's the domain of neuroscience, the philosophy of mind and empirical psychology.


How is the is/ought gap bridged simply by reasoning about this “mental process and history”? This is still the realm of the is, not the ought. Just because we can fill the gap (as Wilson puts it) between the original causes of our beliefs and principles and the beliefs and principles themselves, that doesn't take us into the normative or from the is to the ought (even if the gap is filled with “mental processes and history” or whatever else). By filling in the causal gaps between causes and their effects (ethical precepts in Wilson’s book), we don't take the ethical from the is to the ought or from the descriptive to the normative. I'm simply not sure why Wilson believes that the is/ought gap has been bridged or ‘filled’.


Julian Baggini sees these problems as well. How will acquiring knowledge of the causes of our ethical precepts tell us whether or not our precepts are the right or wrong ones? The causal or scientific facts of genetics or whatever may help us understand why we hold our ethical precepts; though not why we should (still) hold them. Baggini writes:


“The idea here seems to be that ethical precepts – for example, the incest taboo – have their roots in particular genetic and cultural histories. It is clear that understanding such histories will be a useful tool in making ethical judgements. What is less clear is that this is a way out of the is/ought problem. After all, I ask [Wilson], are there not circumstances in which we will do well to struggle to behave in ways that might seem contrary to our natural instincts, as, for example, with respect to ethical precepts rooted in a mistrust of strangers or in aggression responses?”


We will indeed learn much from the aetiology of the incest taboo. Though we won't learn whether that taboo is right or wrong from its “roots in particular genetic and cultural histories”. This knowledge, of course, may help us in other ways. It will tell us, for example, that it wasn't passed down from heaven or that it's not a non-natural precept which we somehow ‘intuit’. That knowledge will indeed have an affect on our “ethical judgements”; though it will not, on its own, determine the conclusions of our judgements.


Wilson seems to be saying that we can derive what we ought to do from what is (or what was) the case. That is, if it's genetically or culturally inscribed, then it must be a correct ethical precept. That clearly doesn’t follow. Our natural instincts, for example, may be bad instincts, as Baggini argues when he says that when


“we will do well to struggle to behave in ways that might seem contrary to our natural instincts, as, for example, with respect to ethical precepts rooted in a mistrust of strangers or in aggression responses”.


Of course certain “natural instincts” may also be good instincts. It just depends.

Posted by Paul Austin Murphy at 18:20